Dymphna and I Agree: Washing Women's Feet on Holy Thursday is a "Side Show!" 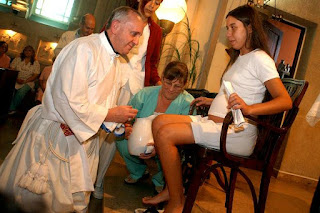 
"In parishes around the world, Holy Thursday has been a sad and sometimes sacrilegious side show for years. Now the side show is official."

No doubt readers know to what she is referring, Pope Francis authorizing the washing of women's feet on Holy Thursday. Of course it's been going on for years with priests disobeying Holy Mother Church. The pope himself engaged in the disobedient practice in Argentina. So is it any wonder that he would now institutionalize the disobedience when he has the chance?


But really, what difference does it make, you may ask? I can think of several reasons. 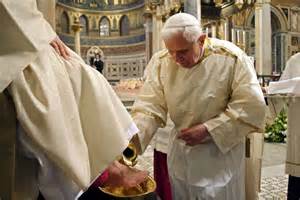 Pope Benedict used to wash the feet of priests. Now that makes total sense! Jesus also washed the feet of His first priests. Pope Francis' decision to wash women's feet, on the other hand, makes no sense. It is a complete break with tradition. I suppose it represents just one more of his "surprises." And no one can convince me that this is a "surprise" from the Holy Spirit. I do wonder, though. We are always hearing about how the pope loves to consult with his bishops, that he is just one among them, the Bishop of Rome. What do you think? How many of the world's bishops did he consult before making this autocratic decision?

Totally agree with you! Several times I declined the invitation when asked to be one of the 12 on Holy Thursday.

Our former pastor washed the feet of his deacons, and all others were chosen from the Knights of Columbus. Seemed reasonable to me.

I, too, declined before to even get involved in the washing of women's feet as I consider my feet very personal, and, except as a child, have never let any man other than my husband or a healthcare provider touch my feet. At first when hearing about the pope's approval of this, I was not too concerned as it is not mandatory. I also thought since he is a senior citizen, he probably looks upon these younger women as daughter's, but after seeing the picture attached to this article, I think it is totally inappropriate. Not good!

I also agree that the Lord was making a point about the priesthood when he washed the feet of his disciples.

Mary Anne, after looking at the picture more closely, I think perhaps the young woman is in a wheel chair and has on shorts. The Holy Father might be doing this because she is wheel-chair bound or ill. I think we should give him the benefit of the doubt. Nevertheless, much discretion is needed if women are included in foot washing, and it should not be mandatory since younger priests might have temptations doing this. In fact one older priests told me that many younger priest object to washing women's feet because they do have such a problem with it.

I won't go that far calling the washing of feet of women on Holy Thursday is a side show.
I guess, it all depends on how you see things but that is far from the truth for me.
God bless you. I hope that you find peace in the changes our Pope Francis does in our Catholic faith.

In situations such as in the picture you attached, it is best to have a blanket or covering with which to cover the legs of girls or women even if they have on shorts. They should not wear shorts or short skirts unless they have a medical problem which makes it hard for them to dress in much else.