What Exactly is There for Catholics to Celebrate about Martin Luther? 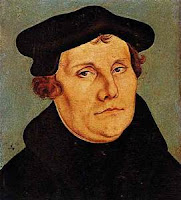 Following the intercommunion with the Lutherans recently at the Vatican, it should come as no surprise that the pontiff will travel to Lund, Sweden in October to open the 500th anniversary year commemorating Martin Luther's revolt against the Church. [Source] Remember that Martin Luther was condemned for heresy and excommunicated. His actions spurred violence throughout Europe and spawned numerous other heretical sects. Many saints arose as they lay down their lives to provide the Mass in places like England and the Netherlands where persecution was rampant. I wonder -- will the commemoration include references to them or would that put a damper on the Luther love fest?


Reuters predicts "Traditionalist anger." Is that anger, in fact, one more example of "rigid" Catholics married to "absolute truth" who act like "idolaters and rebels" for resisting "change" or is it the normal reaction of real Catholics who believe in the fullness of the truth and love both Holy Mother Church and the papacy? After what happened at the Vatican recently the "commemoration" may very well include a Catholic Mass where Lutherans are welcomed to receive the Body and Blood of the Lord. Even if it doesn't, is there a problem with the pope participating in this "commemoration?"

Well, let's take a look at the word itself. The common understanding of the verb to commemorate means "to recall and show respect for something or someone." [source] Commemorate comes from the Latin words cum: with or together and memorare: remember or be mindful of. The connotation of the definition is to remember in order to honor and celebrate. At the tomb of the unknown soldier in Arlington we commemorate all the soldiers killed in wars who could not be identified and celebrate their sacrifice. When we hold services at Ground Zero we commemorate and celebrate the lives of the victims and heroes of 9/11. We don't commemorate the terrorists.

So let's take a little deeper look at Martin Luther. He used some legitimate grievances over the selling of indulgences (which he acknowledged was an abuse of the doctrine on indulgences) as the wedge to attack the faith. But ultimately he engaged in a vicious assault on Christ Himself accusing Our Blessed Lord of fornication with the woman at the well, Mary Magdalene, and the woman taken in adultery. Here's the pertinent quote from Luther published in Luther's Works, American Edition, Vol. 54, p. 154, Concordia Publishing:


"Christ committed adultery first of all with the woman at the well about whom St. John tells us. Was not everybody about him saying: 'Whatever has he been doing with her?' Secondly with Mary Magdalene, and thirdly with the woman taken in adultery whom he dismissed so lightly. Thus, even Christ, who was so righteous, must have been guilty of fornication before he died."

Oliver Stone, director of the blasphemous film, The Last Temptation of Christ, clearly wasn't original in his filthy imagination.  But convincing oneself to believe such evil, makes it a lot easier to justify a life of sin. Hey, Jesus was a sinner just like us so how can we be condemned for anything we do?

Here's what Fr. John Hardon, S.J. had to say about Luther and his work.

There is nothing to honor or celebrate about Martin Luther. He set in motion the most devastating event for the Church since the Roman persecutions. For more about Luther, his doctrine and history, listen to the interview with Dr. Peter Chojnowski from Gonzaga University here. Ironically, Luther considered the pope the devil. I doubt he'd be thrilled with Pope Francis participating in an event held in his name. He passionately hated the Mass, the priesthood, and the papacy.

At a vespers service January 25th concluding the annual week of Christian unity, Pope Francis echoed the past apologies of recent popes saying,  “I want to ask for mercy and forgiveness for the behavior of Catholics towards Christians of other churches which has not reflected gospel values. We cannot erase what happened before, but we do not want to allow the weight of past wounds to continue to contaminate our relations.” Yes, indeed, we really need to apologize for all those rigid Catholics, cleric and lay, murdered during the Protestant revolt. So what exactly is there to celebrate about Martin Luther? What exactly is the pope commemorating? And what does the pope's language say to those descended from the martyrs murdered for practicing their Catholic faith?

In going to Lund, Pope Francis appears to be walking in the footsteps of Martin Luther. As a faithful Catholic, I don't see anything to celebrate, but another opportunity to mourn for our poor Church. One wonders whether the pope will see anything to commemorate about the 100th anniversary of Fatima occurring also in 2017. Or is it only heretics who deserve to be so honored.
Posted by Mary Ann Kreitzer at 2:10 PM