St. John Neumann, Pray for Us! 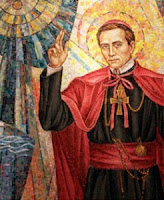 If you aren't familiar with St. John Neumann, fourth Bishop of Philadelphia, please remedy the situation at once. What a great saint! He himself was an immigrant to the United States where he exhausted himself in service to God's people. A gifted linguist, he was the perfect priest to be sent to America where multiple immigrant people often had no priest who could speak their languages. Neumann, on the contrary, was fluent in six languages including Italian and taught himself Gaelic so he could hear the confessions of the Irish immigrants in the coal-mining region of Pennsylvania who had no English.

St. John began as a diocesan priest, but desired the fellowship of community life and later entered the Redemptorists.
What a blessing for that order! He was the very first to be professed in the U.S. Even then, he often toiled alone since the needs in the "new country" were great and the number of priests few. At his first assignment in the Niagara Region, the young priest walked miles to visit his farming flock who were spread far and wide. A parishioner later gave him a horse, but he detested riding and often chose to walk instead. He was once rescued from attack by friendly Indians in the area.

After he became a Redemptorist, Fr. Neumann served in Maryland and was pastor at St. Augustine's in Elkridge from 1849-1851. That gives my husband and me a personal relationship with him. St. Augustine's was my parish church for about four years (when I was home from college) and it is the parish church where we were married.

St. John always loved poverty. He arrived in the country with one suit of clothes and only a dollar in his pocket. His devotion to poverty continue throughout his life. As bishop, St. John often gave away everything he had to the poor. His clothing was so threadbare he was sometimes chided by his brother priests.  When one told him he should change because it was unseemly for a bishop to dress like that, he asked what he should change into since the cassock he was wearing was the only one he had. (His humility was so great the saint always acted as one among equals with his confreres. Wouldn't it be nice to see that kind of humility and virtue among our bishops today, many of whom live in the lap of luxury?)

When the bishop collapsed on a street in Philadelphia in January of 1848, those who took him into a nearby house didn't recognize the bishop of Philadelphia in the poorly clad man they carried. By the time a priest was brought he had already died.

What a great saint for our time when so many of the hierarchy serve themselves instead of their flocks. Let us ask his intercession for the sanctification of our bishops. You can make a virtual visit to the Shrine of St. John Neumann in Philadelphia here. And I heartily recommend the saint's short autobiography which he wrote under obedience after being named bishop of Philadelphia.

PRAYER FOR THE INTERCESSION OF SAINT JOHN NEUMANN


O Saint John Neumann, your ardent desire of bringing all souls to Christ impelled you to leave home and country; teach us to live worthily in the spirit of our Baptism which makes us all children of the one Heavenly Father and brothers and sisters of Jesus Christ, the first-born of the family of God.

Obtain for us that complete dedication in the service of the needy, the weak, the afflicted and the abandoned which so characterized your life. Help us to walk perseveringly in the difficult and, at times, painful paths of duty, strengthened by the Body and Blood of our Redeemer and under the watchful protection of Mary our Mother.

May death still find us on the sure road to our Father's House with the light of living Faith in our hearts. Amen.
Posted by Mary Ann Kreitzer at 2:24 PM