Why Are Protestant Leaders Often More Clued In than the Catholic Hierarchy? 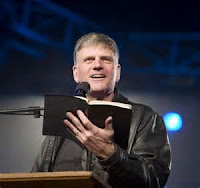 Here's the text of Graham's letter to President Obama:


Mr. President, you’re looking at the wrong place when it comes to the root cause of gun violence. Your executive actions will do nothing to change this horrific problem. You can take all the guns in America and put them in a pile on the Mall in Washington DC, and those guns will stay there and will eventually rust and decay. Not one gun will crawl out of that pile and shoot or harm anyone.

It takes a human being, and a human heart bent on evil, to pick up a gun, load it, and pull the trigger. The problem we have in this country is sin. We have a government that has taken God out of society. Our founding fathers certainly did not intend this to happen.
Your proposal will do nothing to stop the violence that is being glorified by Hollywood. Every night the networks, movie channels, and theaters are filled with programming that glamorizes gun violence—guns are used to shoot, to kill, and to splatter human blood all over screens across America.

There needs to be legislation to curb this. I would propose starting with a heavy tax on the manufacturers of any film or game that graphically depicts violence. If violent films and games were taken off the shelves, I believe we would see a dramatic drop in gun violence over the next few years.

As a nation we have turned our back on God and this kind of violence and bloodshed is a result. The Bible tells us, “The heart is deceitful above all things, and desperately wicked: who can know it?” (Jeremiah 17:9). The only cure? Jesus Christ. That’s what will make a difference in our nation.

Isn't it ironic that all the liberals in Hollywood and New York have absolutely no problem with gun violence and mayhem in movies, TV, and video games; but insist on eliminating the second amendment rights of law-abiding Americans. Perhaps they are too stupid to realize that evil is first conceived in the mind before it is acted out with the body. That's why pornography is so deadly and that so many sex criminals, like serial killer Ted Bundy, first immerse themselves in violent porn before graduating to the real thing. The same with those willing to kill with a gun, a knife, a lead pipe, a candlestick, or a rope around the neck.

I'm with Graham, heavily tax those glorifying violence. The last time I went to a movie all the previews depicted non-stop graphic violence. By the time the main attraction began I was exhausted by twenty minutes of chase scenes heavily laced with explosions, gunfire, and physical brutality. And all of it was preceded by the notice that this preview is suitable for all ages. Yeah, right!

It's time to stop the liberal hypocrisy that wants to confiscate guns from law-abiding citizens while teaching kids through visual and manual simulation how to use them.