Sunday Meditation: Will You Be a Star or a Roadblock? 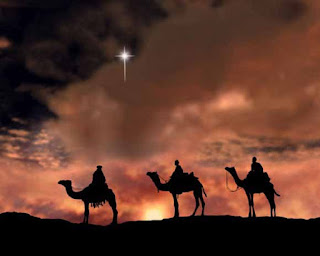 At Mass this morning, Father challenged us to be "stars" to those in our lives who are seeking the truth. People look to many "stars" in the world: rock stars, sports stars, TV and movie stars. But how many seek the only stars that really matter: those who lead us to the light and the truth.

The Three Kings dropped everything to follow the star and it was no small feat. We don't know how far they came, but scripture certainly gives the impression it was a great distance. St. Jean Vianney tells us they left everything, faced the ridicule of their own peers, and willingly accepted the challenges of the journey.

When they arrived in Jerusalem, they naturally went to the palace. Certainly, the king of Judea would know about the baby and seek Him. And Herod did seek Him -- not to find the Way, the Truth, and the Life; but to kill Him, because he thought the baby threatened to his power. And his advisers, the priests and prophets helped him. Don't you find that shocking? They, who knew all the prophecies and informed the wise men and professed to believe -- why did they not immediately go to find the King as well? They were, after all, awaiting the Messiah weren't they? And yet all the priests and prophets did was point the wise men on their way, but stayed where they were, apparently indifferent to God's promise. St. Ignatius of Loyola says they were like signposts, stuck in the mud so to speak. Why? Why did these descendants of Moses and Abraham and David not seek the Lord?

Perhaps for the same reason so many of our religious leaders today embrace the world's wisdom and shun the truths taught by Jesus Christ. Did the priests of Judah prefer the king's approval and the perks that came with working in the palace to Yahweh's promises? Did they love hobnobbing with the rich and powerful and fear that seeking the real King would jeopardize their positions of influence? Sad, isn't it, to trade a relationship with the Lord of the universe for a place at Herod's table.

I'm praying today that in 2016, I will never be a roadblock to anyone seeking the truth. I want everyone I meet and touch to want to find the light of the world who brings the peace that surpasses understanding and makes our burdens light. How much we need Him, today more than ever when the temptations to sin and damnation grow increasingly more insidious and demonic.

Now, the question is -- how do I become that light? I know it begins with prayer and so I resolve to continue my practice of daily Mass and the daily rosary. I'm adding a daily prayer seeking St. Joseph's assistance. As patron of the universal Church, he can help us get things back on track by following him as the star of fidelity and humility. We can hardly do better (except by following the Mother of God) than imitating the "just man" of the gospels.

Who are the stars in your life? And who do you want to lead to the Light of the World?

Labels: Feast of the Epiphany, follow the star, sunday meditation

Enjoying the light that shines from the Les Femmes star....

I was just reading Maria Agreda's Mystical City of God concerning the finding Jesus in the temple teaching the doctors who were amazed. But why did these "wise men" not see the Messiah?

58. During the rest of the journey the heavenly Mother
discoursed with her sweetest Son on the mysteries,
interiorly manifested to Her concerning the discussion
with the teachers. He repeated by word of mouth, what
He had shown Her interiorly. In particular He told Her,
that these doctors had not recognized Him as the Messias
because they were inflated and arrogant in their own
knowledge. Their understanding was obscured by the
darkness of their pride, so that they could not perceive
the divine light shining forth in such profusion from Him ;
while, if they had had the humble and loving desire of
seeing the truth, his reasoning would have sufficiently
convinced them. On account of these obstacles they
saw it not, though it was open before their eyes.