Economics of War: Russia, Oil, and the Dollar 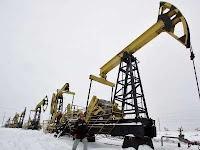 I confess, I'm a little bit of a ditz when it comes to economics. Except for balancing my own home budget, the world of finance has never been my forte, especially Wall Street finance. But I found this article interesting, particularly the part about breaking of Russian oil's connection to the dollar making it harder for the U.S. to wage war. Now wouldn't that be a blessing!:

The Russian move to price in rubles its large oil exports to world markets, especially Western Europe, and increasingly to China and Asia via the ESPO pipeline and other routes, on the new Russian oil benchmark in the St. Petersburg International Mercantile Exchange is by no means the only move to lessen dependence of countries on the dollar for oil. Sometime early next year China, the world’s second-largest oil importer, plans to launch its own oil benchmark contract. Like the Russian, China’s benchmark will be denominated not in dollars but in Chinese Yuan. It will be traded on the Shanghai International Energy Exchange.

Step-by-step, Russia, China and other emerging economies are taking measures to lessen their dependency on the US dollar, to “de-dollarize.” Oil is the world’s largest traded commodity and it is almost entirely priced in dollars. Were that to end, the ability of the US military industrial complex to wage wars without end would be in deep trouble.
Perhaps that would open some doors to more peaceful ideas such as spending US taxpayer dollars on rebuilding the horrendous deterioration of basic USA economic infrastructure. The American Society of Civil Engineers in 2013 estimated $3.6 trillion of basic infrastructure investment is needed in the United States over the next five years. They report that one out of every 9 bridges in America, more than 70,000 across the country, are deficient. Almost one-third of the major roads in the US are in poor condition. Only 2 of 14 major ports on the eastern seaboard will be able to accommodate the super-sized cargo ships that will soon be coming through the newly expanded Panama Canal. There are more than 14,000 miles of high-speed rail operating around the world, but none in the United States.

That kind of basic infrastructure spending would be a far more economically beneficial source of real jobs and real tax revenue for the United States than more of John McCain’s endless wars. Investment in infrastructure, as I have noted in previous articles, has a multiplier effect in creating new markets. Infrastructure creates economic efficiencies and tax revenues of some 11 to 1 for every one dollar invested as the economy becomes more efficient....

A dramatic decline for the role of the dollar as world reserve currency, if coupled with a Russia-styled domestic refocus on rebuilding America’s domestic economy, rather than out-sourcing everything, could go a major way to rebalance a world gone mad with war. Paradoxically, the de-dollarization, by denying Washington the ability to finance future wars by the investment in US Treasury debt from Chinese, Russian and other foreign bond buyers, could be a valuable contribution to genuine world peace. Wouldn’t that be nice for a change?

Of course, there is no end of politicians' ability to find ways to make war and line the pockets of a handful of elite pragmatists who have no problem trading lives to fill their bank accounts. My husband and I pray a Hail Mary after grace every evening before dinner for world peace. Think we'll offer our rosary for that tonight as well.
Posted by Mary Ann Kreitzer at 1:31 PM

It could be good but the people who run this country won't allow it.

I am sure they would not let go of the petro-dollar without some form of fight. It really is the only thing propping us up right now. The other problem, though, is that oil is used as a political weapon, so straightforward economic principles (such as what is really good for the country) don't always apply. The Saudis could get miffed and dump a bunch of oil on the market to destroy another rival whose economy is also oil dependent. Or, for example, to basically halt the shale oil industry, since it is more expensive at this point to retrieve oil from shale (although very abundant) and therefore it is not cost effective with oil at $30 a barrel.