Do They Really Believe the Baby in the Womb's Life is Worth as Much as a Bishop's? 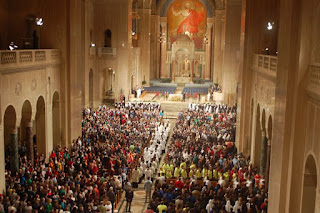 A friend of mine sent me the statement below which he said was posted yesterday as a comment on The Vortex. This, my friends, explains it all. How many bishops stand on the podium at the March for Life like politicians? One of the reasons we still have abortion is because our shepherds have never acted like they believe the baby is the same as the rest of us. If they did, they would have been leading the sit-ins to save the babies. And if they all ended up in jail; there would have been signs on the churches saying, "No Mass today, our priests are all in jail." How long do you think abortion would have lasted if every bishop had acted that way?

A friend and I spent months back in the 70s trying to get priests and ministers to lead sit ins at the abortion mills. Only one taker, Rennie Scott of Truro Episcopal Church, who agreed to be one among others. Unfortunately, there were no others. We spoke to the priests council in D.C. and met dead silence. We met with Bishop Thomas Welsh who, to his credit, organized a large rally at a local abortion mill.

Despite dozens of visits, that was the end result, the extent of support for the babies in imminent danger. Let them die; we can't do anything about it. And that, friends, is why the killing continues. The only ones who would put their freedom on the line were laity. Most of the shepherds wouldn't even preach about it. And, let's face it, many of them continued to vote for pro-abortion Democrats who enshrined the killing in their platform. And so, this comment describing Cardinal Dolan's silence is no surprise. If his life were on the line it might be different, but he can laugh it up with Obama and others of his ilk, because he is not their target (yet).

Pray for our bishops!

I attended the Mass at the National Shrine of the Immaculate Conception last night. The Mass, held on the eve of the march, is part of a longer pro-life vigil which continues through the night and until just before the start of the march. The celebrant and homilist was Cardinal Dolan. During his homily: he did not condemn abortion, he did not explain to the young men and women in attendance there why abortion is wrong, he did not explain that a majority of our political leaders support abortion and that is why we must march, and, astonishingly (but sadly and not surprisingly), he did not utter the word "abortion" even once. Instead, he vaguely asserted that we failed to promote a pro-life culture (which, of course, he did not explain or define) when the Church acted in a way that inhospitable to the poor or ethnic minorities, (in particular, Hispanics). Of course, we should be hospitable and charitable to the poor and people of all ethnic backgrounds. But, is that really a point of disagreement among pro-lifers? Of course, not. And is lack of charity the cause of abortion in the US? Nope. Just the mere fact that the demand by would-be adoptive parents far outstrips the supply of adoptable children in the US shows this assertion to false. The homily was a hodgepodge of non-sequiter, evasion and red herring. It was a calculated, and in my mind diabolical, attempt to defang the march of its potency to effect political change and to avoid causing discomfort to Cardinal Dolan's pro-abortion friends and power brokers whose approval and company he so desperately seeks (largely because of the celebrity it gives him). If I had not been chaperoning a group of kids, I would have walked out. I hate to admit this, but for a moment I allowed myself to be demoralized. I wondered how can we win and what is the point in fighting when the great weight and moral authority of the Church is being turned around and wielded against us. Thanks be to God, that moment of weakness passed. St. Athanasius, St. Thomas More, St. Hilary, ora pro nobis.
Posted by Mary Ann Kreitzer at 6:07 PM

One must admit that Dolan is at best, lackluster. Who arranged for Dolan to celebrate that Mass? We do have real problems at the top, even to the very top.

"If I had not been chaperoning a group of kids, I would have walked out." That's not how you follow the example of St. Hilary, St. Athanasius & St. Thomas More. And that's not how you set a good example for kids either. If you think the kids don't see the hypocrisy, they surely do--and will follow the adults example: that the standing in the parish, the job, the family are all more important than God/babies.

In the late 80s/early 90s Operation Rescue had lay people doing what you wanted clergy/ hierarchy to do:

And GUESS WHO stopped the protests by having Teddy Kennedy (Catholic) sponsor the FACE Act which made it a FELONY to block the entrance to an abortion clinic. Introduced in the Senate by Sen. Edward M. Kennedy (D-MA) (the entry talks about "violence", but blocking the entrances was not violent, but was shutting down the abortion bizness).
https://en.wikipedia.org/wiki/Freedom_of_Access_to_Clinic_Entrances_Act

The bishops officiating at these 'prolife' masses and vigils actually have bloodier hands than Lady MacBeth. Personally, after Francis visit where he was surrounded by Catholic politicians who have blocked all attempts to restrict abortion and constantly talk about how pro-abortion they are, (Biden, De Blasio, Cuomo, Mikulski, Pelosi, Kennedy, Sotomayor, Roberts, etc.), I don't see how anyone could attend any "mass" or "vigil" w/them w/out fearing the wrath of Almighty God.

But, of course, as long the 'prolifers' permit the bishops to play the double game (and actually the prolifers are playing the game too), the babies will continue to die.

Wonder if pro-lifers were in prison if francis would have any more concern over them than Asia Bibi. After his visit to the U.S. never heard such blatant support for killing the innocent while opposing the death penalty for convicted murderers! And requiring pro-life pregnancy clinics to advocate murder!
http://www.cnsnews.com/news/article/melanie-hunter/martin-omalley-kill-babies-not-murderers

In the U.S. it's cruel and unusual punishment to execute a convicted murderer by lethal injection, but it's "health care" for someone "fully conscious" the doctors no longer want to treat:

(no articles in the nat'l press about this man at all) But look at all these articles about the poor felons and their lengthy deaths from these torture lethal injections:

Imagine if they were starving to death the felons, for Teri Schiavo (or your mama) it's painless /serene:

When you want to put your husband down, lethal injection is the ticket & starvation is "slow" and "unnecessary":
http://www.nbcnews.com/health/health-news/diane-rehm-my-husbands-slow-deliberate-death-was-unnecessary-n150096

29 Week Fetuses according to the NY Times (unlike felons) PROBABLY feel no pain!
http://www.nytimes.com/2005/08/24/health/study-finds-29week-fetuses-probably-feel-no-pain-and-need-no-abortion-anesthesia.html

There should be a March for Life in every city. There are enough Catholics to do that on Jan 22. Also to take a page from the Black rioters, it seems if one wants respect or to be taken seriously in this country, one must get violent: and one can only get violent if one is truly outraged. Why aren't we outraged? 60 million babies have been murdered in cold blood by legal fiat of the U.S. Supreme Court. It has shocked me the way the country and Catholics have just ignored the baby parts being harvested and sold. But, of course, Catholics send their grade school children in beanies to this march as if it were a field trip or a joke.
http://dailycaller.com/2015/04/26/baltimore-mayor-i-wanted-to-give-space-to-those-who-wished-to-destroy-video/

If Barack Obama and other culture of death politicians lobbied for murdering unwanted bishops, the love affair with them would be over.

I used to think they just didn't really care about the babies, but now that I see the mass murder of Christians by Obama-backed rebels and the bishops continue to gaga over him, I think concern about human life ends at the tip of their nose.

It's the "Francis effect". Don't be overly shocked.

What were they thinking to invite a card carrying Democrat like Dolan to address an elite group of Catholics like the pro-life marchers? He couldn't carry their shoes. He is such a disgrace to the fine legacy of Cardinal John O'Connor. He should stay in his own space and continue the destruction of schools and traditional parishes while doing nothing to take on the satanic sodomite subculture.

The Canadian bishops failed to use the word "abortion" in their "Election Guide" this year.

You may read the whole sordid affair here: http://torontocatholicwitness.blogspot.ca/2015/08/canadian-bishops-website-promotes-two.html