Gilbert Magazine's Strange Ideas about the Muslim Infiltration of the West 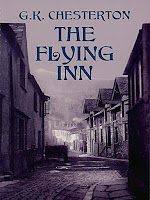 The West, including the United States, is being inundated by a massive influx of Muslims fleeing Syria.  They join the hundreds of thousands already admitted from countries that hate us. Are they truly refugees or is the massive infiltration of Muslims to the West a silent invasion, Al-Hijra in fact, i.e., taking over a country by immigration?

I read a head-shaking editorial in the Nov-Dec issue of Gilbert Magazine yesterday by Sean Dailey. It argued in favor of welcoming Syrian refugees saying that opposition is fueled by baseless fear of terrorism that is generating a "rage" unrelated to "clear thinking." According to the writer, "fear sees every desperate foreigner as a terrorist," while most are just individuals "fleeing horrific violence and oppression." He concluded his editorial by equating refugees with the holy family seeking shelter.
Not once in the editorial did he raise the fact that the large influx of Syrian refugees are almost exclusively Muslim (No persecuted Christians welcome, thank you!) and are changing the West and moving her inexorably in the direction of a worldwide Islamic caliphate.

It is a strange position for a magazine that extols a man who wrote an epic poem about the Battle of Lepanto in 1571. It is often called the "last Crusade" and was fought by the Christian West (organized by Pope Pius V) to stop the Ottoman Empire's invasion of Europe.

What would Chesterton say about Muslim immigration?

I think he would oppose it as I believe St. Thomas Aquinas would. Here's how Chesterton describes the followers of Islam. “…out of the desert, from the dry places and the dreadful suns, come the cruel children of the lonely God; the real Unitarians who with scimitar in hand have laid waste the world. For it is not well for God to be alone."

Chesterton actually wrote a novel warning about the Islamization of England titled The Flying Inn. It shows the government elite captivated by Islamic ideals. The two protagonists, resisting the government's transformation of the culture, "fly" about England in their car (the flying inn of the title) with a barrel of beer, a wheel of cheese, and a pub sign. They set up shop here and there along the way to dispense beer  and cheer, while being pursued by government elites and their lackeys who want alcohol banned (at least for the common people).

William Kilpatrick has an interesting article at Crisis Magazine, Chesterton's Islamic England, describing how clear-sighted Chesterton was in warning of the colonization of England by Islam:


Chesterton’s prophetic novel hits uncomfortably close to home. One thing he didn’t anticipate, however, is that the final Islamization of England could be accomplished without importing a foreign army. Since modern England has already imported enough Muslim immigrants to engineer a significant cultural shift, an occupying army won’t be needed. Otherwise, Chesterton was right on target. He foresaw that an Islamic takeover would be facilitated by cultural elites eager to show their tolerance for new ideas and fashions and their corresponding disdain for traditional culture.

You have to read the entire article to recognize the length and breadth of the enabling of Jihad by Al-Hijra taking place, not just in Europe, but here in the U.S. as children are indoctrinated in Islam in school and we are constantly brainwashed with the idiocy that Islam is a "religion of peace."

Who would have thought that the Islamic invasion would be facilitated using Chesterton's own words by those who claim to know the great man best? I'm frankly baffled by the editorial board at Gilbert.

But I offer you Chesterton himself in the video below who says, "I'm not much of a crusader, but at least I'm not a Mohammedan." I do not think he would celebrate the Islamization of either England or America. This article describes the situation three years ago. Ask yourself whether things are better now or worse?

If I remember correctly, Gilbert Magazine was also very light on the Harry Potter series some years ago when it came out, taking a position that the witchcraft in it was not a danger. So this is not the first time that their editorial position leaves much to be desired.

I'm never very impressed with the reviews in Gilbert, especially of TV shows. But I still get the magazine because I like a lot of it. This editorial was certainly an exception.

But I need to make a correction to my post. I'm rereading The Flying Inn and it wasn't a barrel of beer they carted about England, but rum. Too bad...dispensing beer and cheer is a lot more alliterative than rum and cheer. But, on the other hand, perhaps it's more appropriate since the adjective "rummy" which is rarely used these days means strange, odd, or unusual. That description certainly fits Dalroy and his friend Pump. They are the consummation of political incorrectness and eccentricity. Kind of like Chesterton himself, eh?