Among modern saints (anyone recent enough to leave a legacy in photographs), St. John Bosco must be counted as one of the most fascinating. Even as a young boy his evangelical zeal set him apart from his peers. And yet he was all boy with a talent for running races, tightrope walking, and engaging in gymnastic stunts. He juggled and told stories and used all his talents to attract an audience of youngsters whom he taught the catechism. Like a magnet, he drew young people to him and carried a special love for them in his heart and a zeal for their salvation that carried over into his priesthood.

Italy at that time was suffering from internal struggles and many poor young boys were coming to the cities where they lived on the streets and often got into trouble. Don Bosco set about solving the problem by opening an oratory, a combination home, church, academic and trade school. He concerned himself about both their bodies and their souls and his mother soon moved in to help with the cooking and organization. He made many enemies among the tradesmen of Turin who exploited the street boys for low wages and resented the competition his training brought about. Some even tried to poison him and there are stories of a dog who would appear to accompany him on his rounds and then disappear when protection was no longer needed.

St. John may be most famous for his prophetic dreams many of which are outlined in Forty Dreams of St. John Bosco taken from his biographical memoirs. At the early age of nine, St. John had a dream that set the ground for his vocation.

I dreamed that I was near my home, in a very large playing field where others were playing and not a few were cursing. I was so shocked at their language that I jumped into their midst, swinging wildly and shouting at them to stop. At that moment a Man appeared, nobly attired, with a manly and imposing bearing. He was clad with a white flowing mantle, and His face radiated such light that I could not look directly at Him. He called me by name and told me to place myself as leader of those boys, adding these words: "You will have to win these friends of yours not with blows but with gentleness and kindness. So begin right now to show them that sin is ugly and virtue beautiful."

It seemed impossible to the boy, but the Man told him He would give Him a Teacher who would help
him.  That Teacher was the Blessed Mother. She told him to be "humble, steadfast, and strong" and the boys in his dream who were transformed into wild animals would become like lambs. 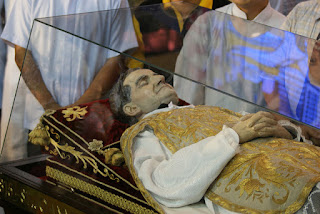 St. John had this dream many time with new aspects added that helped him to develop his work. This wonderful saint has much to teach us about how to evangelize youth with kindness and gentleness. There is also an excellent movie about the life of the saint. He's played by Flavio Insinna. This film is much better than the Ben Gazarra version which I found incredibly boring, but others may disagree. At any rate, if you don't know St. John Bosco, I heartily recommend you make his acquaintance, especially if there are teenage boys in your life. They would benefit from making him a friend. St. John is among the few saints whose bodies are incorrupt.

St. John Bosco, pray for us.