A Modest Proposal for the March for Life: Move it to the Right Anniversary! 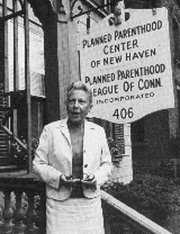 As tens of thousands prepare to participate in the annual March for Life with a record-breaking snowstorm predicted for the area, I can't help thinking we keep shooting at the wrong target. Yes, Roe v. Wade was an atrocity, but it was only the bitter fruit of an ugly seed -- Griswold v. Connecticut.

An astute friend of mine said years ago that we were never meant to march in the dead of winter on the anniversary of Roe v. Wade, January 22nd; that, instead, we should be marching on the anniversary of Griswold v. Connecticut, June 7th (1965). Why that decision? Because Griswold enshrined the "right to privacy," removed restrictions on the sale of birth control to married couples, and set in motion acceptance of abortion on demand as a personal right, as well as sowing the seeds for death on demand by euthanasia.
Griswold set the stage for two other high court decisions: Eisenstadt v. Baird, which extended the right to privacy for contraception to fornicators and Roe v. Wade which, with companion decision Doe v. Bolton, gave the U.S. abortion on demand. Roe and Doe were both based on lies; nevertheless they are the law of the land. But it was Griswold that first poisoned the goodness of the sexual act and its place in marriage.  And all these Supreme Court decisions became serial killers for the culture of death.

The first casualty of Griswold was "killing" the dignity of women by turning their ability to be mothers from a blessing into a curse, something to be "controlled" rather than revered. The blessing of children was also shot down as pregnancy increasingly was described as a sexually transmitted disease and the babies as unwanted burdens and even punishments. The separation of the marital act from its procreative potential made women little more than sex objects for pleasure, a reality we see all too clearly in today's youth culture where "hooking up" is not uncommon, and women themselves no longer recognize their own dignity.

No doubt Margaret Sanger who died in September1966 rejoiced over Griswold. In fact, Sanger's offspring, Planned Parenthood, was behind the case. Estelle Griswold headed up a Planned Parenthood "clinic" in New Haven and she, along with Dr. Lee Buxton, a Yale Medical School gynecologist, deliberately provoked their arrest to challenge the Comstock laws banning the sale of contraceptives.

Griswold was just the beginning, of course, paving the way for abortion which Sanger intended from the very beginning. Often misrepresented as opposing abortion, Sanger was a pragmatist and salesman. Abortion wouldn't sell in the early 20th century. Nevertheless, she openly advocated it. Her birth control pamphlet, Family Limitation, revised in 1917, included instructions to women on how to bring on their period if they were late:


If there is the slightest possibility that the male fluid has entered the vagina, take on these same nights  [four nights before expected onset of period] before retiring, five or ten grains of quinine, with a hot drink. The quinine in capsule form is considered fresher, but if this is taken do not use alcoholic drinks directly after, as it hardens the capsules, thus delaying the action of the quinine.

By taking the above precautions you will prevent the ovum from making its nest in the lining of the womb.

By 1917, the dynamics of human conception had been well established and Sanger certainly knew she was providing how-to instructions for early abortions. While promoting methods to prevent pregnancy, she knew better than anyone that birth control fails. She mentioned in the same pamphlet that, "No one can doubt that there are times when an abortion is justifiable." To portray Sanger as opposed to abortion is untenable. She simply played a waiting game.

The connection between all these evils: contraception, abortion, and euthanasia (voluntary and involuntary) is well established. All you have to do is exam the beliefs and philosophies of those espousing them, many of them population control enthusiasts. Some of the same activists instrumental in achieving Griswold were active in the Voluntary Euthanasia Society of Connecticut including Hilda Crosby Standish, a pioneer in promoting both birth control and sex education. (source: Ian Dowbiggin, A Merciful End, Oxford U. Press, 2003, p. 80)

The various euthanasia groups in America are a Who's Who of those who were also instrumental in promoting contraception. They recognized how inextricably linked birth control and voluntary euthanasia are. Among them were philanthropists like millionaire Hugh Moore who coined the term "population bomb" before Hugh Ehrlich.  I highly recommend Ian Dowbiggin's book, A Merciful End, for anyone who wants to understand exactly how we got from Griswold to where we are today with states legalizing assisted suicide.

We are, in fact, in the same situation with regard to euthanasia as the U.S. was on abortion prior to Roe with individual states legalizing physician-assisted suicide. And the highly publicized case of Brittany Maynard sent the death agenda into high gear. It is just a matter of time before the next hurdle is leaped and another evil Supreme Court mandates voluntary euthanasia as a "privacy right." That involuntary euthanasia will be its Siamese twin will be conveniently ignored. Can this be prevented? Of course, but only through a miracle of prayer and sacrifice. As Jesus said, that is the only way to drive out some devils.

Griswold, indeed, was only the first serial killer working for the culture of death, but it holds primary responsibility for what came after. Perhaps it's time to move the March for Life to June so we can start chopping at the root of the problem instead of hacking at its branches.

Two marches sounds good to me. I wonder how many church leaders would have the guts to take on contraception. Remember the silence following Humanae Vitae. Things haven't changed a lot in forty years. We still rarely hear about contraception from the pulpit. I wonder if anyone confesses it.

At the risk of being accused of heresy I ask: Is the March for Life effective? Does it accomplish anything or is it an expensive political stunt? What has it to show by way of progress toward the political objective for which it was initiated 41 years ago?
A few years ago I read a book called The Much Too Promised Land by Aaron David Miller. Miller is an American Jew who labored for years under both Republican and Democrat Administrations to bring peace to Israel-Palestine. In it he described how, much to his frustration, part of a small minority controlled Congress on matters relating to Israel. The small minority are the American Jews but they are not united on policy. It is the Zionist-leaning members of that small minority who wield political control and have made Congress, as Pat Buchanan once wrote, "Israeli Occupied Territory." Primarily, the organized lobby is a coalition under the American-Israel Political Action Committee (AIPAC). All presidential candidates attend an AIPAC Forum and pledge support for Israel. AIPAC doesn't do marches. They bundle checks. Instead of sending checks individually, a "bundler" collects them and hands them to the candidate while explaining who they came from and what they want in return. If the member doesn't do what they require, the bundled checks will go to that member's political opponent at the next election. There is no mercy and no prisoners are taken. Both parties understand the rules. It works incredibly well.

Dear Mary Ann - It is a funny coincidence that both you and the Great Mickey V. would do a piece on the exact same subject on the exact same day without consulting each other beforehand. I guess this proves yet again that great minds think alike !

Dear Mr. McFadden Sr. - I doubt that many serious pro-lifers think that the annual March For Life in D.C. every January is the be all and the end all of pro-life activism. It is just one of the countless pro-life activities which one can involve oneself in. Giving money to pro-life politicians and causes, the tactic you suggested in your comment, is also one of those countless pro-life activities. Ultimately abortion will end one day, through the Grace of God, by the efforts of many people, over the course of many years, engaged in many different types of activities, with the annual March For Life being just one small skirmish or battle in the much larger overall war to stop the holocaust going on against the unborn.

Thanks for the compliment, Sweat. Our orientation on the subject was different but it was kind of Twilight Zone experience. Although I guess it really isn't too odd for two totally orthodox Catholics to recognize the evil of contraception as the root of the abortion holocaust. So maybe not to strange after all.