Guest Post: The Pope of Insults Condemns Those Who Insult! 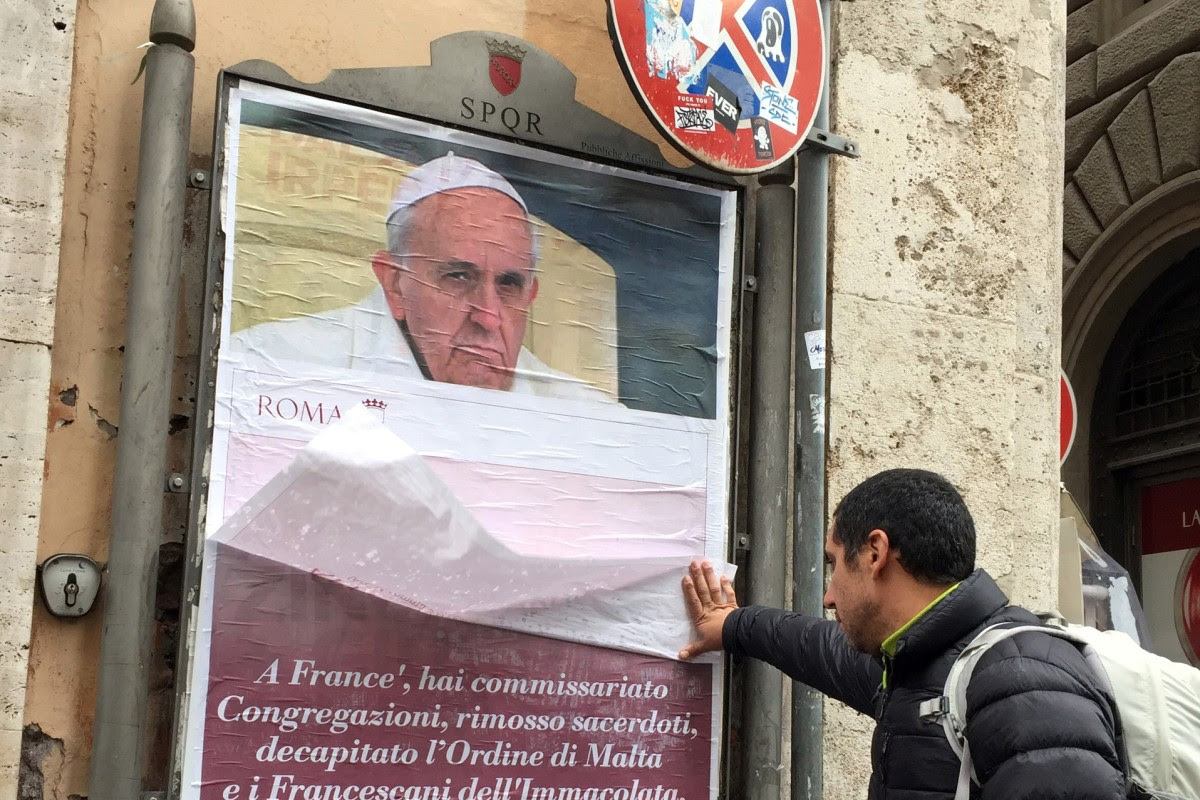 Editor's note: One is tempted to laugh. Would that be unmerciful?

Francis Apparently not Happy with Roman Posters
By David Martin
Pope Francis seems to have taken offense over an anonymous poster campaign which called into question his mercy. On February 4, Romans woke up to more than 200 posters of a stern-faced pope plastered all over the city, with a caption that asks, "But where is your mercy?"

The unidentified posters accused Francis of having "ignored cardinals" and "decapitated the Order of Malta" — references to a bitter dispute between the order and the Vatican that benched a conservative cardinal.
The day after the incident, the pope called on pilgrims during the Angelus prayer to stay far away from "the polluting germs of ego, envy, and slander."
The following Sunday he criticized the everyday use of "insults," an apparent reference to the anonymous posters, though it seems he was also alluding to a barrage of criticism he has received in recent months over his progressive Vatican reforms and his dissent from Church teaching and practice. In his weekly Angelus address, Francis highlighted Jesus' commandment, "Thou shalt not kill," saying the edict applied not only to actual homicide, "but also to those behaviors which offend the dignity of the human person, including insulting words." He added that he "who insults his brother kills that brother in his heart."
Insults indeed are grave sins against charity, especially insults against the Faith. However, the anonymous posters were not intended as insults to the pope, but were earnest inquiries as to where his mercy is at. After all, he has shown mercy for liberal U.N. anti-life agents who use his Vatican to promote a more "sustained" planet through population control (abortion), and he has exonerated people like Albrecht von Boseselager of the Knights of the Order of Malta after he was rightfully dismissed by his superior Fra' Matthew Festing for distributing $millions worth of contraceptives and abortifacient drugs, while Festing was asked by the pope to resign. Where is the pope's mercy?
He has shown his mercy to offenders like abortionist Emma Bonino whom he called "one of Italy's greats," and to Fidel Castro who lived by the firing squad, while demoting and showing disdain for outstanding Vatican prelates like Cardinals Burke and Sarah for their humble witness of the Catholic Faith.
Worse yet, he has made fun of young Catholics who prefer to attend the Traditional Latin Mass, and went so far as to say that the reason young people attend this more "rigid" form of the Mass is to "hide their evils." In an interview given by Pope Francis to his close confidant Fr. Antonio Spadaro SJ, who is Editor-in-Chief of Civiltà Cattolica, he expressed wonder over why young people, who were not raised with the Latin Mass, nonetheless prefer it.
"And I ask myself: Why so much rigidity? Dig, dig, this rigidity always hides something, insecurity or even something else. Rigidity is defensive. True love is not rigid."
Words like these are "the polluting germs of ego, envy, and slander" that need to be cleansed from the Church. When Christ said "Thou shalt not kill," it also meant not to kill the spirit of young people, who after much prayer, deliberation, and struggle, have decided to do something right in life to the delight of their Maker. A crime it is that they should be insulted this way for their fidelity.
If Francis were true of heart, he would cry tears of gratitude that these young people, who could be using their time to engage in pop culture and sin, have chosen rather to grow up and to attach themselves to God in the old Mass. And he would be instant to understand that it is Christ himself who gently draws these precious souls to himself in the Traditional Mass. Why should Francis Wonder!?
He seems to have a phobia about the goodness of God. This goodness was manifest through the ages by the glories of tradition wherewith God enriched his Church. In his mercy He extended to us the jewels of sacred tradition and the Latin Mass, that it might be a joy and cleansing to his people, so why does Francis scorn these treasures while adulterating the Church with change? Women deacons? Lay Eucharistic ministers? Communion to adulterers? Respect for "gay orientation?" Youth Mass on the beach with guitars, beachwear, and gay dancers? What kind of scandal is he pushing on the youth? He discards rules and regulations and then teases the flock with this socialist merry-making that he calls mercy! "Woe to the world because of scandals!" (Matthew 18:7)
Nay, the posters in Rome were not an insult to the pope, but were providentially arranged for his instruction. Let us pray that Francis will revisit this matter and learn by it. And let him "dig, dig," that he might discover his own "rigidity" which makes him "defensive" against tradition.
https://www.yahoo.com/news/pope-francis-speaks-against-insults-175811979.html?soc_src=mail&soc_trk=ma

I tried to leave a comment but it failed.... I guess I don't know how to do it. sorry!

Try again. This one came through all right.