MBO Part 2: What is the Emerging Church

I began this article yesterday with some important background information about Management By Objective, which you can read here if you missed it.  I originally was hoping to discover information about how MBO might apply to the Democrat Party, since it seemed obvious to me they cared little about anything but their end result.  I still think there is a connection, but from my first click on the internet I began to uncover information I never imagined would have anything to do with MBO or its founder, Peter Drucker.


I would not ordinarily share on this Catholic blog the issues that seem to plague Protestant circles, but I think Catholics would be very foolish to ignore the problems fellow Christians have been dealing with by thinking “that can’t happen to us.”  I believe it may be just exactly what is about to happen.  We’ve seen it beginning to creep in now as dim light at the end of the day foretells the night.
I am especially concerned knowing that as I write, a group is in Rome deciding on what and how to “address the Youth Problem” in the future.  In other words, how can we change the Church to meet that customer's “needs?”  To be sure, the Church today is a big business.  Billions and billions of dollars are involved worldwide.
Where lots of money is involved, and the Catholic Church is certainly one of those entities where this is the case, the issue of management must be addressed just like any other business.  Only the Church is not meant to be a business, it is the Body of Christ whose sole mission is to “feed the sheep” with Christ’s message of truth, baptizing them in the name of the Father and the Son and the Holy Spirit.  So when you mix the two, salvation of souls and the running of a business, you have a problem:  to which shall I be faithful?
I read today one of the things “youth” are asking for in this synod is more attractive space in parishes for their meetings.  What has that to do with leading a Christ filled life?  You can go to hell in a beautiful space as easily as one that is plain and dreary.  However, what we hear today is a pope telling people to “come in,” see how you like us and once you are in then decide on all the doctrine and complicated stuff later.  Maybe you will like some of it, maybe you won't but don't let it stand in your way.  There's room to dialogue once you are in the tent.
In my MBO and Drucker searches, the first page I pulled up was this one, published in 2014, titled “Who Is Peter Drucker and What Did He Do With Our Church.”  I invite you to read it.  It begins with this statement:
“The Post-Modern church is shaped around what has become the “business” of doing Church. The focus is on growing the numbers, defining the brand and making the customers happy, rather than focusing on feeding the sheep or equipping the saints to bring the Good News of the Gospel to those who don’t know Him.”
A little further down the page is this paragraph:
What many of us don’t realize is that the Seeker-Driven model and the Emerging Church is a product created by and promoted by the “Druckerites,” or those who have been personally mentored and inspired by the late business guru Peter Drucker. Who is Peter Drucker? Today we’re going to talk about him and his influence on today’s visible church – and by the way just about every church has been touched and shaped in some way by Peter Drucker.
What we should pay particular attention to is the term “Emerging Church,” because it is not the Church we know in new clothes, but a totally different “church” from what we have ever witnessed since the Ascension of Christ into heaven.
The Wikipedia page for “Emerging Church” includes this information under the heading “Generous Orthodoxy”:
“…some emerging church leaders see interfaith dialogue as a means to share their narratives as they learn from the narratives of others.[37] Some Emerging Church Christians believe there are radically diverse perspectives within Christianity that are valuable for humanity to progress toward truth and a better resulting relationship with God, and that these different perspectives deserve Christian charity rather than condemnation.[38] Reformed and evangelical opponents, like John MacArthur, do not believe that such generosity is appropriate, citing the movement's shift away from traditional evangelical beliefs such as eternal punishment and penal substitution towards a reintroduction of, for example, elements of ancient mysticism. ‘

We should recall what Paul wrote to Timothy while he was in Ephesus, a town in Turkey that was historically a pagan land that embraced mythology and engaged in mysticism.
2 Timothy 2-4:
I charge you; preach the message; be persistent in doing so, whether in season or out of season; convince, reprove, and encourage, but with great patience and instruction.  3) For the time is coming when people will not accept sound doctrine, but they will follow their own desires and accumulate teachers who will preach to their itching ears.  4) They will shut their ears to the truth and be captivated by myths.”
I encourage you to open and read the entire page on the Emerging Church.  Much of it sounds very much like what we hear coming out of the Vatican and from documents written by the “Francis posse” that endorse the kinds of changes he seems bent on making.
Another very scary page I discovered was this one, published in 2011, titled, The Emergent Manifesto (of Hope?).  The article states:
“The emerging church movement has come to believe that the ultimate context of the spiritual aspirations of a follower of Jesus Christ is not Christianity but rather the kingdom of God. …to believe that God is limited to it [Christianity] would be an attempt to manage God. If one holds that Christ is confined to Christianity, one has chosen a god that is not sovereign.”
………..You see the emergent church is headed towards building a kingdom. This kingdom will include anyone and everyone. All religions are welcome. You can throw Jesus into the mix if you want. However the common denominator is not Jesus. The common denominator is the kingdom.
This page then states what I believe the Catholic Church is currently at work trying to implement.  It says,
Perhaps there are those who are going emerging and they don’t know where “emerging” is diverging from biblical Christianity. They only want to do what is effective to reach this generation for Jesus. 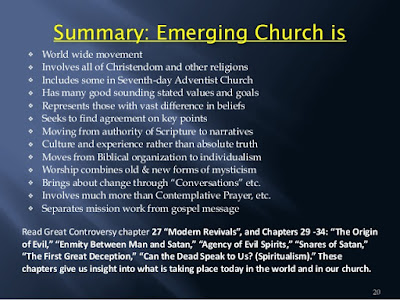 Synod on Youth anyone?  Listening sessions at the Vatican, perhaps?  The “next generation” is the one we must “sell” our product to and if that’s your OBJECTIVE then you focus solely on what will make them happy and the money will continue to roll in.  For a while at least.
I want to be clear about one thing.  The author of this page linked above writes for Lighthouse Trails, an organization that is openly opposed to the Roman Catholic Church.  I am willing to quote them only because their worst enemy may well be our enemy also.  I don’t believe you will find information about the “Emerging Church” on many Catholic sites, or if you do, they will describe aspects of it like a blind man running his hands over an elephant for the first time and trying to put words to his experience.  We are not blind, but we may be blinded from the truth if we are not curious enough to investigate this and root it out where we find it, calling it by name, and informing others of the danger.
Posted by Chriss Rainey at 6:00 AM