Nabi Sayeth: How Much Did the Faithful Pay for Bransfield’s Life of Luxurious Debauchery?

Editor's Note: Have you ever noticed how many of the lavender mafia are engaged in all kinds of nefarious activities to finance their lurid lifestyles? How much money gets lifted from the collection basket? Do the parish financial procedures protect the integrity of the flock's donations? Here's just one story about a "my lord" who used his position to defraud and embezzle hundreds of thousands from the Church. MSGR Arsenault (Isn't it interesting how so many of the gay guys get that title?), a top aide to his bishop, . Sound familiar? If you're reading Nabi's posts, it is sickeningly so!

I once received a $50 bill in the mail as a donation for Les Femmes from Fr. William Ehrbacher who later was exposed as one of lavenders with porn in the closet. I suspected at the time that he was "grooming" us to believe he was as orthodox as his words indicated. I never quite fell for it for a number of reasons and wondered at the time if the money came from the collection. He's been disappeared, but I suspect he is still being supported by the diocese as other released homosexuals are. Is money paid to these guys as "hush money?" Absolutely yes as Cardinal Wuerl's example shows in the case of Fr. George Zirwas. It isn't just the victims of abuse who are paid to keep their mouths shut! And who knows best where all the closeted skeletons are? As for the bishops who pay for silence, they apparently fear the loss of the almighty dollar and their undeserved respected reputations more than they fear Almighty God. All the facts coming out confirm the truth of everything that Nabi is reporting.

Nabi asketh: Have you ever wondered how much YOU paid FORMER Bishop Bransfield for his life of luxurious debauchery? Someone recently shared with Nabi an IRS 990 form that indicates but one income source for the corrupt clergyman. 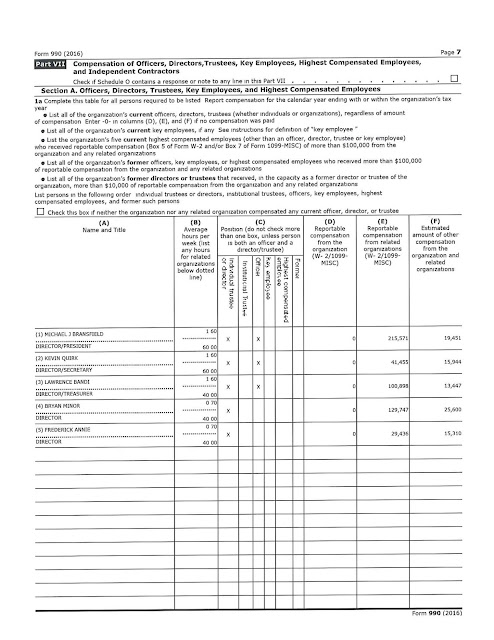 Now what this payday does not include, among other items is:

-the money paid for many first class flights to Rome plus his spending money,

-the several renovated luxury mansions, including a sunken bar and wine cellar at the Wheeling mansion

-the money expected as gratuities for Confirmations. His priest driver would call some parishes to remind the pastor to have Bransfield’s check prepared

-the money spent on a driver

-the money spent on his 6000 sq. ft. retirement home off National Road, Wheeling

These expenditures are not the sum total of FORMER bishop Bransfield’s regular spending of Diocesan monies. But please note: ALL SPENDING TOOK PLACE WHILE HE WAS BISHOP OF ONE OF THE POOREST STATES IN THE USA! His extravagant spending was a source of scandal to many people throughout WV, Catholic and non-Catholic alike.

There is a Sacred Scripture that serves as a judgment against the behavior of FORMER Bishop Bransfield and all clergymen who live in such opulence:

19
“There was a rich man* who dressed in purple garments and fine linen and dined sumptuously each day.
20
And lying at his door was a poor man named Lazarus, covered with sores,i
21
who would gladly have eaten his fill of the scraps that fell from the rich man’s table. Dogs even used to come and lick his sores.
22
When the poor man died, he was carried away by angels to the bosom of Abraham. The rich man also died and was buried,
23
and from the netherworld,* where he was in torment, he raised his eyes and saw Abraham far off and Lazarus at his side.
24
And he cried out, ‘Father Abraham, have pity on me. Send Lazarus to dip the tip of his finger in water and cool my tongue, for I am suffering torment in these flames.’
25
Abraham replied, ‘My child, remember that you received what was good during your lifetime while Lazarus likewise received what was bad; but now he is comforted here, whereas you are tormented.
26
Moreover, between us and you a great chasm is established to prevent anyone from crossing who might wish to go from our side to yours or from your side to ours.’
27
He said, ‘Then I beg you, father, send him to my father’s house,
28
for I have five brothers, so that he may warn them, lest they too come to this place of torment.’
29
But Abraham replied, ‘They have Moses and the prophets. Let them listen to them.’
30
He said, ‘Oh no, father Abraham, but if someone from the dead goes to them, they will repent.
31
Then Abraham said, ‘If they will not listen to Moses and the prophets, neither will they be persuaded if someone should rise from the dead.’”

Nabi can only pray that Bishops/Cardinals Bransfield, McCarrick, Wuerl and their many comrades repent before it is too late….
Posted by Mary Ann Kreitzer at 12:15 PM

The people( should be parishioners but we were never treated like parishioners) of the diocese of Wheeling Charleston should go after Bransfield personally for misappropriation and malfeasance of diocesan assets. Can you imagine that his salary was only the tip of what he shitted away!
God Bless NABI

It appears to me, that we ought go back to the source that first permitted these un-priestly atrocities. How is it that they were accepted into the seminary in the first place? Surely, their proclivity for (here insert the appropriate word, such as homosexuality, etc.,_________) would have been exposed in some manner or fashion when they were tested for a life as a priest. Who dropped the ball in the first place?

How do you know Fr. Ehrbacher is still being supported by the diocese, rather than merely still being in the directory as a priest, though not apparently on any assignment? I was a parishioner in St. Lawrence when the affair broke. I had the impression that he came from a wealthy family. He was formally cleared after a prolonged investigation of the charge of embezzlement; I keother the bulletin insert from the chancery for several years after moving away. Bp. LoVerde has a record of not tolerating clerical misappropriation of funds; when an audit revealed it by another priest the file was turned over to the police and he was convicted. Private wealth or inheritance could explain the large bank deposits, and eccentricity his keeping his change in large bags. I have closely observed enough grave examples of anal-retentive and obsessive-compulsive behavior to not find that explanation implausible.

I did not say Fr. E was being supported by the diocese, I said I "suspected" he was. There are several other priests who disappeared from Arlington for similar reasons and I don't have proof that any of them are being supported. However, based on the actions we know about other priests in other dioceses (Wuerl in D.C. for instance who increased a priest's stipend in exchange for his saying he didn't know of any priest abuse) it is a reasonable guess Bernardin bought the silence of his accuser. How much collection money has been exchanged to keep the skeletons in the closet?