Nabi sayeth: If a clergyman is not happy with the Holy Catholic Church and if he cannot assent to Her teachings then he must go….pure and simple. If he is afflicted with sexual lusts and addiction, especially for boys, teens, young men, he must be expelled from Holy ministry. We live in a free country, for now, so his options for a religious experience are aplenty if he cannot live the way of the Church.

Several bishops in recent history have supported the climb of one particular clergyman who made his way “to the top” as vicar of a vicariate. He is currently pastor of a parish with both a Catholic grade school and high school. And yes, young boys and teens are in attendance. [Editor's note: Nabi refers to Dean Borgmeyer, pastor of St. Joseph's in Huntigton, who was made a "my lord" by FORMER Bishop Bransfield in early 2018. See the announcement here. Consider how the lavender mafia advances and raises its own to positions of greater power.]

While in times past making his sexual preference clear publicly on several occasions and actually being cautioned for doing so by several of his Lavender friends, he crossed the line with the former bishop Schulte. On a “gay pride day” at the WV State Capitol, the clergyman dared show up on the steps of the Capitol with a sign indicating that he was a “gay priest” while wearing his clergy attire.

When this act of defiance against Church teaching was reported to Schulte the clergyman was quietly ushered into the US Navy Chaplaincy program. He remained there until he phoned then auxiliary Bishop Schmitt to ask if he could be reinstated to the diocese when Schmitt might become the bishop of the diocese after Schulte’s departure for New Orleans. Schmitt agreed.

The clergyman continued his “gay pride” activities. While stationed in Morgantown, he attended meetings for the explicit purpose of promoting government approval of same-gender unions, a concept that runs contrary to the Catholic teaching on the Sacrament of Holy Matrimony. Here’s an excerpt from the minutes of one particular meeting:

Patty, Roger, and Charlie agreed to be media contacts. Patty and Sheila would be the desired first point of contact.

Note from secretary: dates and times of WV Marriage Equality meetings are included on the Greater Charleston, WV Lesbian, Gay, Bisexual and Transgender Events Calendar on the web: www.aidsnet.net/calendar/calendar.htm.

If he is not in agreement with Catholic Church teaching, why does he not leave and work within a religious structure that is in line with his personal opinions? Why would he sign up to pollute the minds of Catholic parishioners with his heretical beliefs?

As vicar of a large parish with Catholic schools he has daily contact with little boys and teen boys: at masses where boys serve, in classrooms of the  schools, in the gym, throughout the day. If he has a lust to view pornography picturing pre-teen, teen and young adult males, why is he permitted to be near the boys? Is this not a lustful temptation and high risk situation given the horrible and scandalous revelations to which the world has been exposed?

Following is a twitter conversation between the clergyman and a homosexual couple in the northeast. In the conversation, the clergyman discusses his delight with the work of a pornographic artist, Philip Gladstone. It seems the clergyman is conflicted as to where he would display Gladstone’s work in his rectory: 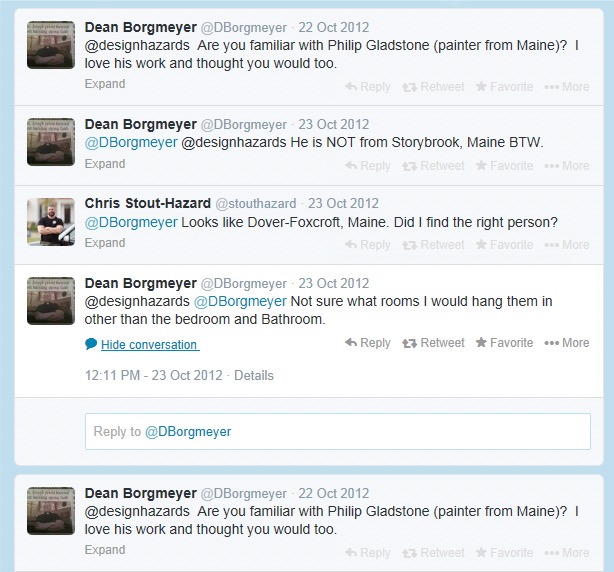 [Editor's note: Many of the paintings depict young men and boys nude or nearly nude some with genitals clearly exposed. Use caution visiting this site. And consider -- would you trust any man who wants to hang these paintings in his room - much less a priest? Think of Borgmeyer viewing these pictures on his bedroom wall when he rises and his bathroom wall as he gets ready to say holy Mass or visit the youngsters in the school. Would you trust him with your young boys knowing he enjoys gay "art"?]

Included in Gladstone’s work is a painting of our Blessed Lord dying on the cross, His genitals exposed, and hot air balloons lifting off from behind the cross on Calvary.
THAT IS A HORRIBLE SACRILEGE!  And thanks to the efforts of FORMER Bishop Bransfield and his Lavender chancery crew, the clergyman’s actions were covered up.

A letter including documentation was mailed to the Papal Nuncio, opened and forwarded to FORMER Bishop Bransfield and his Lavender chancery crew. The information was covered up and kept secret, especially from parents at both schools pastored by the clergyman. Some time later the clergyman was made a vicar and a Monsignor.

The elevation of this clergyman is clear evidence:

1. That the hierarchy cannot be trusted

2. The protection of our children/teens cannot be supervised by the Lavender clergymen.

3. Ordained ministry in the Catholic Church must be exorcised and purified.

4. What about our other Catholic schools? Is the clergyman stationed at your school safe to be around children/teens?

Both sites are locked.

Here's his Facebook page. https://www.facebook.com/dean.borgmeyer.9
Note the silly photos, especially the one of him with a "halo" and the one one with candles in his mouth. And of course there's a photo of a rainbow.

The inane video about cookies and ice cream? Note that he says his "appointment came to the door" bearing double stuffed Oreo cookies.

Our Lady of Fatima who came to warn us, intercede for us. Such great evil cannot continue to ravish souls.
"And suddenly, His Anger will blaze." How much longer, Lord?

Father Dean Borgmeyer was assigned to my parish before his current assignment in Huntington. I don't know anything about porn or his liking of a blasphemous artist, however I do know that while he was at my parish, he was able to be present and a comfort to our dying pastor who succumbed very fast to an aggressive form of cancer and not only was he a comfort to dying Father Steve, but he helped our parish as we grieved Father Steve's death. With permission from the bishop, he added two extra Mass times to the weekends, and also offered Confessions before every Holy Mass, so that more people had the opportunity to attend Mass and the Sacraments. He also, in order to reduce our parish debt to the diocese for a very sour building loan we were made to accept for a new gymnasium for the parish school, donated most, if not all, of his salary back to the diocese. While he was at our parish, he seemed to be a good pastor to the parish and I did not notice or see any reason to be alarmed at his work among our parishioners. If he was addicted to porn or enjoyed the art of a pornographic artist in 2012, he showed no such inclinations while at our parish. Other than some very goofy jokes before homilies began or after they were concluded, Father Dean seemed to be walking a very straight line in being faithful to catholic teaching, and most especially about marriage and family, which he always defended in his homilies.

The call not to trust him with children or young adults is rational and quite good advice if you consider that should be the default setting for every adult that has contact with our children; coaches, priests, religious sisters, teachers both male and female, and also friends and also the parents of our children's friends.

The masquerade ball continues for now, but another mask has fallen off and stands exposed. The dance cannot go on forever. What Nabi sayeth is truth. His YouTube channel has always been a bit odd. What about a certain sister G who is also supportive of the Lavender agenda? Also worrisome that seminarians have stayed with him in the rectory?

It’s like serving up a delicious lasagna with varying amounts of poo mixed in to the filling. Perhaps a little. Perhaps a lot. Any is too much.

Thank you for your post; my experience with Fr. Dean’s is similar to yours. I’ve only seen goodness and kindness from him, nothing that contradicts Catholic teaching. Watch him, yes. As we should watch ANY adult who has contact with children or young people. Celibacy is the issue more so than homosexuality. There’ve been too many hetero priests who were unable to keep their pants zipped. I don’t care what your inclination is; if you make a vow of celibacy, and KEEP the vow, then how can anyone fault you?
God alone, GOD ALONE will judge.

If you are promoting a painter who creates blasphemous sexual artwork depicting a nude Christ is that consonant with the virtue of chastity and respect for God and his Church?

And with regard to homosexual clergy who don't act on their inclinations, do you likewise think it would be okay for a heterosexual priest to live in a convent with nuns and interact with the on an intimate day-to-day basis, sharing a bathroom, enjoying recreation together, etc.?

How do you think the clergy sex abuse situation happened where 80% of the abuse was pederasty (gay men with pubescent boys)?

You are certainly right that GOD ALONE will judge the soul of each person, but aren't parents responsible to make judgments about protecting their children?

"Goodness and kindness" in a Priest means nothing. They are Priests Of God. They serve God in His Holy Temple. They hold God in their consecrated hands. Holiness. Saintliness. Belief. Steadfastness. Courage. Perseverance. Charity. Those first; then gooodness and kindness. Glorify God and sanctify His Temple first; then pleasant human traits second.

Do they believe in God? Do they believe everything the Catholic Church teaches? Are they, or are they not in a state of Grace? Do they believe in sin and its opposite, virtue, as things to be avoided or pursued? Do they, or do they not believe sodomy is a sin that cries out to heaven for vengeance (pillar of salt vengeance)? Do they secretly love a man, boy, woman or girl in their adulterous heart (the same as committing the act in God's eyes)? Will they, or will they not, after passing out cookies to the ladies luncheon, go back to their chambers and masturbate to sodomite pornography? Is there a stable of young boys and or men in their private quarters with which they are carrying on sodomite sex acts? Are they using their parishioners children as sexual vehicles?

The curtain is being pulled back on sordid sin in holy places among our consecrated class. Now is a time to insist on righteousness; not just goodness and kindness. To judge, as it were. Everybody on earth can be good and kind. But God wants more from those who claim to be Christian, especially His Priests. Holiness. 1st Commandment level holiness with God first, middle and last. This other stuff has to end. Among us laity, certainly, but especially among our Priests who are called to something higher. Or, frighteningly, vastly lower.