And You Wonder Why Doctors are Willing to Kill Patients for their Organs?

The first two paragraphs of the article:

The AMA meeting is now over. The delegates have left. The AMA has a clear message for America: “we are dead inside.” By a 363-71 margin, the AMA physician leaders stood against life itself, rejecting a call to defund the corrupt abortion group, Planned Parenthood. Every effort was made to prevent the AMA from revealing their true nature. As predicted, parliamentary maneuvering, political threats and mockery were used in an attempt to prevent even an open discussion and vote on the matter. The AMA does not really want America to know that they occupy a dead zone on life, one illustrated in practical and symbolic terms at the meeting itself.

Tricks and tactics
The cover-up attempt was all for naught however, since in the end the debates occurred before all of America and God. The proud lieutenants of Planned Parenthood rose in solidarity with corruption and indisputable acts of evil. The debate was sparked by a resolution I proposed as AMA delegate. Resolution #220 asked that “the American Medical Association actively support legislation to immediately end federal and state funding of the Planned Parenthood Federation of America, Inc.” The AMA politicians were prepared. They knew that having such a discussion at the AMA was dangerous. They didn’t want America to know that most of the AMA physician leaders supported abortion and would vociferously defend Planned Parenthood’s heinous activities.....

A piece of advice -- Find out where your doctor stands. You'd better believe that a doctor willing to endorse stabbing a baby in the neck and sucking out his brains and then harvesting the organs, will gladly see you butchered alive for your organs or starved and dehydrated to death if you're just a useless eater. The medical profession has good men and women in it, but this vote indicates they are in the minority and on the decline. Protect your life (to the degree you can) with a medical wallet card and medical power of attorney that "protect and preserve life." Order them from Life Guardian Foundation. 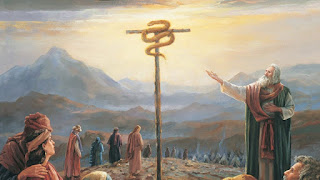 Just a note on the AMA logo. It comes from the rod of Asclepius who was a Greek god associated with healing. But when I looked at the logo I immediately thought of the Israelites in the desert. When they grumbled against God, he sent serpents among them and many died. When Moses interceded, God told him to erect a pole with a serpent on it (prefiguring the cross) and whoever looked at the image after being bitten would live. Those doctors who respect life act like Moses in the desert protecting their patients from evil. Those who have abandoned life and allied themselves with the serpent from the Garden of Eden are pagans, not like those committed to truth and virtue, but in the image of the Aztecs who ripped out the beating hearts of their victims. Which type do you see in your doctor?
Posted by Mary Ann Kreitzer at 10:28 AM