Talk about Progressive Tyrants: You WILL Believe in Climate Change - Or Else! 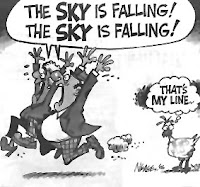 The Church gets a lot of flack for putting Galileo under house arrest for teaching that his theory that the sun was the center of the universe was, in fact, a fact. It wasn't, of course, because the sun is NOT the center of the universe. But progressives never tell you that when they attack the Church. So now we have a doctrinaire progressive who wants to criminalize those who dispute the theory of man-made global warming.  I suspect it won't just be house arrest for the big bad global warming deniers.

Do you think any of the progressives will criticize NY's attorney general for his Soviet-style antics? Yes, they do resemble Stalin's attitude toward science:

Aleksandr Solzhenistsyn’s book, “In the First Circle,” was all about the Soviet government’s suppression of scientists and engineers with the wrong scientific views.

The more things change the more they stay the same. Whatever you call them: liberals, progressives, socialists, or communists, these dictators want everything under their feet including science. If a scientist disagrees with the prevailing liberal ideas, "Off with his head!"

Global warming/climate change is a theory mostly based on flawed computer models. Increasingly, facts are emerging that dispute the theory, for example, NASA's reporting that the ice caps at both the North Pole and South Pole are not melting, but increasing! Of course, according to the climate change alarmists, no matter what happens -- colder, warmer, more ice, less ice, rising sea levels, falling levels -- it's all evidence that proves man-made climate change is a fact rather than a theory with lots of holes. Here's a bit from the article:


In addition to ignoring the First Amendment, Schneiderman is apparently unaware that the claim that the world is endangered by a warming climate is a scientific theory, not a proven fact. There is dissension in the scientific community about this theory, and robust debate about both the temperature evidence and computer models on which the theory is based.

In fact, as the Heritage Foundation’s Nicolas Loris points out, “flaws discovered in the scientific assessment of climate change have shown that the scientific consensus is not as settled as the public had been led to believe.” Leaked emails and documents from various universities and researchers have “revealed conspiracy, exaggerated warming data, possibly illegal destruction and manipulation of data, and attempts to freeze out dissenting scientists from publishing their work in reputable journals.” Furthermore, the “gaffes” that have been exposed in the United Nations’ Intergovernmental Panel on Climate Change reports “have only increased skepticism” about the credibility of this scientific theory.

One would like to think that all scientists are persons of integrity, but it just ain't so. And there's a lot of money to be made from grants to Chicken Little University.