The Nightmare at Elm Street Hospital: A Horror Story 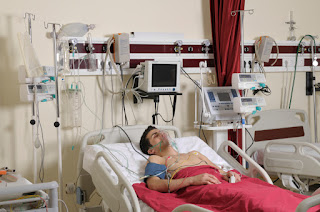 You're in a hospital room. It's stark and cold. You are sitting in a chair next to a bed where a figure lies very still -- your beloved son John Paul.  He's on a ventilator and has an IV.You listen to the hiss of the ventilator and watch the liquid from the IV bag dripping into the tube that leads to his arm. A machine measures his vitals. It shows a strong heart beat and records his blood pressure. He looks like he's asleep, but medical staff say he's in a coma, possibly brain dead. You pray he wakes up soon.


People tell you that a person, even one who's in a coma, can hear, so you are talking to him, telling him all about his sister's birthday party last night and letting him know that she's coming in later after work. You notice that his blood pressure goes up when you speak and levels off when you're quiet. Dad's coming in later you tell him. As you speak, you're holding his hand. It's warm and flexible. You twine your fingers in his and stroke his arm with the other hand noticing the blue veins and thanking God for the blood pumping through his body. Stroking his head you think of when he was a baby. You held him and cuddled and stroked him. Like this. Love wells up in your heart. He looks so vulnerable and helpless. You want to gather him in your arms and tell him everything will be all right.

You notice how pink his cheeks are. He has a growing stubble on his chin and you think, "He needs a shave," then chide yourself for focusing on such trivia when he might die. No, he can't die. He's so young and so much to live for. You notice the catheter that is emptying his bladder and collecting urine in a bag. Soon the nurse will need to come and empty it. The black eye he sustained in the accident looks so much better. His body's healing mechanism is clearly working to reduce the swelling and bruising. You pray, your rosary beads passing through your fingers.

A few minutes later a doctor comes into the room with an attractive young woman. "I'm sorry, Mrs. Jones," he says, "Your son is brain dead. We have an MRI showing his brain is dark and there is no circulation. You can't expect him to recover. For all intents and purposes he's dead. Please accept my condolences"

Your head starts spinning. You look at your son who is warm and pink and obviously to you very much alive. Is he really dead? How can that be? You've seen a cadaver. You were with both your dad and mom when they died. Their bodies became pallid and cold. Your dad who was sitting in a chair leaning against the bed had what looked like a bruise forming on his forehead at the pressure point. The blood was pooling there after circulation stopped. He wasn't breathing. You know what death looks like. No circulation, no respiration, a cold cadaver. That is not John Paul, "Not my son," you say out loud.

John Paul doesn't look dead. He's breathing. Yes, he needs a respirator to help him, but can a dead body breathe if you put it on a ventilator? Will a dead body begin breathing again? Impossible! How can they say he's dead?

Then the young woman begins to speak. Her voice is soft and filled with compassion. "I'm so sorry, Mrs. Jones. I know how hard this is for you and your family, but your tragedy doesn't have to be the end of the story. John Paul's accident can offer a blessing to others." She pauses. "You probably know John Paul signed up on his driver's license to be an organ donor. He's clearly not going to recover and even if he could recover what kind of life would that be? He'd be a vegetable."

That word triggers something in you and you respond in anger. "He's not dead and he certainly isn't a vegetable. Look at him. He's alive. All the signs of life are there. That's not a dead body in the bed. John Paul is alive!"

The organ procurement agent (that's who she is) shakes her head a little and reaches forward putting her hand on your arm. "I know how hard this must be, but your son was an adult and he made a life-giving decision in case he was in a serious accident. It's sad, but it happened. We've notified the surgical team to prepare for organ donation. His death will give life to several people. He's a match for two young adults on the recipient list. Just think what a gift that will be to them and their families."

"But he's not dead," you insist. "Look at him. You can't do that. I'm sorry for those families, but my son needs his organs. They can't have them!"

"He only looks alive because he's on the machines," the doctor says. If we take him off the ventilator he won't breathe on his own."

"I'm sorry, Mrs. Jones," but your son was an adult. He made his own decision. You've already told us you don't have a medical power of attorney for him. Under government HIPAA regulations we shouldn't even be talking to you about his condition. We'll give you time to call in your family to say good-bye and then we'll be prepping your son for surgery this evening."

"I'm sorry, Mrs. Jones. But we aren't killing your son. He may look like he's alive, but he's already dead."

"No, he's not dead. You're lying. He's alive. Look at him! Look at him! Please, God, let me wake up from this nightmare!"

Is this a real case? No, it's a thousand cases. The organ procurement industry is worth billions of dollars. Every seriously injured patient is a potential donor especially the young. Don't sign away your rights to medical care or make yourself a target of the organ harvesting industry by signing a donor card. Have a medical power of attorney to protect your life. Carry a medical card in your wallet. Protect yourself. Go to the Life Guardian Foundation. Carry a "Medical Card to Protect and Preserve Life." It reads, "I, (name) direct that all medical and surgical treatments and care, including nutrition and hydration however administered, be given to protect and preserve my life. Do not hasten my death. Do not shorten my life. Do not do an apnea test. Do not take any organ for transplantation or any other purpose." Sign with two witnesses who also sign.

Warning: The video below is graphic. It shows doctors harvesting the heart of an organ donor. Do you really want doctors to take your beating heart? That's what kills you! No vital organs can be "harvested" from a dead body. They deteriorate too quickly. What kills the organ donor isn't brain death but the removal of the heart from the body. If they are taking other vital organs they ALWAYS take the heart last. And then the patient dies. You can live with a brain injury. You cannot live without a heart! Brain death is NOT true death. It's a strategy for harvesting organs.