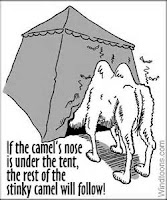 This weekend the Catholic Media Coalition is sponsoring a meeting to discuss end of life issues. It is an area that people would be wise to study since it is being used like the camel's nose in the tent to completely change U.S. medicine. How? From focus on the individual, i.e., preserving and protecting his life to focusing on the collective and hastening the individual's death if a risk/benefit analysis shows he's a non-contributor to the collective.

At Mass this morning I was struck by this sentence from the gospel. "Where the body is, there also the vultures will gather." It made me think of the palliative care team at the hospitals following families around trying to convince them to sign away the organs of their loved ones.
Pay attention to Jenny Hamann in the video below who was declared brain dead. She wasn't. She was in a locked in state. But she was seen as a "thing" who could be harvested. Thank God her husband was "unreasonable" and would not sign the forms!

Yes, they are vultures indeed. Listen to the RN in this video talk about a "procurement" presentation to doctors and nurses. The procurement person made it absolutely clear that "brain death" is subjective and "whatever the doctor says, whatever the hospital says," as Dr. Paul Byrne points out.

Just follow the money. There are billions of dollars for those involved in procuring and distributing organs. It is much more lucrative than the abortion industry. Watch the video below with a rosary moving through your fingers.

Please pray for the meeting that God will bring out of it whatever is His will. Defend the weak and vulnerable and be wary when you are dealing with medical personnel. They are more and more being trained to hasten death and do everything they can to procure vital organs from the sick and injured. and if you want to see a bunch of vultures check out the second video. For part 2 of the documentary go here.

Mary Ann, I was a palliative care nurse and no one in my organization ever spoke to clients about signing their organs away.we were always referred to patient's when a Physician recommended our company to the patient and family because they ( patient and family) realized the medical interventions i.e the chemo agents and surgeries were not curing their loved one or prolonging their lives, but causing additional suffering to the disease process.
I have been reading what anti hospice organizations have been saying now for quite some time and in many cases realize they o not understand the dying process which is a real biological process just as birthing is itself a process.
If you have questions concerning hospice care i would be happy to answer them as best as I can but I would caution just following the lead from lawyers and non medical personal who are finding this a cause celebre........Sincerely, Mary H

I am sure there are wonderful palliative care nurses and hospice groups, but there is a movement afoot to "transform" palliative care into managed death care. Hospice was supposed to make assisted suicide unnecessary, but in Oregon since the Death with Dignity Act passed, 93% of patients enrolled in hospice choose assisted suicide. Not a very good advertisement for hospice I'd say.

Many organizations like the Coalition to Transform Advanced Care are working to change the entire system of medicine from patient benefit to cost benefit analysis. Is the patient worth the level of care to treat or should he just receive pain management? We will be posting the videos from our meeting on the internet when we have a chance to edit them. Dr. Paul Byrne, a neo-natologist gave two powerful talks on true death vs. the false definition of brain death.

MaryAnn,
The Movement you mention above is pervasive throughout the healthcare system now.
My own GP recently retired with this warning.
"Patient care is not about real care anymore, it is about cost saving and profits.It is a business." No longer is it a vocational calling to care for the sick.
Physician's no longer can focus on their patients, they must hire a team to call health insurance reps and argue on the Physician's behalf for his Orders for what he deems best for a particular patient vs the Protocols put in place to blanket cover any particular diagnosis.
Almost two decades ago another Physician told me that the Hypocratic Oath was now optional for graduating Physicians.
http://www.pbs.org/wgbh/nova/body/hippocratic-oath-today.html
Delivering quality care for the INDIVIDUAL patient is a nightmare now, for experienced conscientious Physicians and nurses.

Nightmare is right. That poor little gal in Nevada Aiden Hailu is being killed by non-treatment because of the lie of calling her "brain dead" when she is clearly alive. You can't have a beating heart with circulation, respiration, digestion, and excretion and be dead. This is the fulfillment of the scripture passage about those who call good evil and evil good. When doctors become killers and organ procurement agents for a billion dollar industry, who will trust their doctors?

Mary Ann,
Money.It is all about the bottom line. Insurance companies and hospital board members rule. The question that is and always will be ,"Who will pay for the ongoing care?"

It is horrifically that simple.

My advice is and has always been to take care of your own.
I personally cared for the "brain dead' as a LTC/rehab charge nurse. The treatment afforded these poor souls by the facilities unionized Aids was pathetic.
In one case they collapsed the bed and the patient was scraped and cut. i treated the injures and called the patient's husband per law to inform him. His response was complete annoyance that I should have even bothered to inform him of the incident.
The attitude for the lives of these people by members of the staff was inhumane
to say the least. I went to a labor lawyer after I resigned because the Nsg Dir and Administrator begged me to list my grievances in writing concerning the patient care I witnessed. He said I deserved a medal. The staff were all suspended but the owners of the corporation met with the Union and were forced to hire these abusers all back or face a generalized walk out. A corporate rep met with me and took me out to lunch. I brought my husband to witness the conversation. I was offered a job as Supervisor at one their other facilities. The Nsg Director and Administrator resigned in dsgust.
As my husband said ,"You will be working with the same unionized LPNs and Aides, forget it."
Then I was hired as Wellness Director for a chain of Assisted Livings. The clients were paying six thousand a month for their rooms. The Pharm Techs at night were allowing the uncertified or inadequately trained aides to administer medications
( on my license). These Aides were welfare mothers whose only option in receiving benefits for their children was to work as a Nurses Aide. They literally had no desire to work with the elderly incapacitated or ill.
I resigned and later heard on the news that the corporation, which owned many assisted livings in the state , were throwing out clients whose money had run out.
They,"...could not afford patients on just Medicaide and Medicare." Basically they were living too long.
It's all about money and profits. People are just "human resources" now to be exploited for profit one way or the other.The hospice agency I worked for had clients in all these facilities and as a "second set of eyes" reported and corrected abuse in care for all of our patients.
There are two sides for all these coins. I tell my family to keep me at home and I support community care programs for those that stay in their home because the best set of eyes are those who really value and love you as a member of the family.

You are absolutely right. It's all about love. The only reason Jahi McMath and Aden Hailu are alive today is because they have families that love them and see them as beautiful daughters made in the image of God despite their condition. Every person going into a hospital or nursing care facility needs family advocates that love them enough to protect and defend them. I pray every day for the vulnerable from the baby in the womb to the frail elderly and ill near life's end.