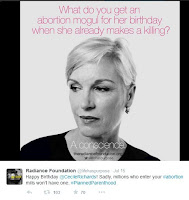 Fr. Jerry Pokorsky got taken to the woodshed by a parishioner recently for comparing Planned Parenthood to ISIS in the weekly bulletin. (Seems apt to me. The only difference between the victims is their size and place of residence and the fact that the kid killers have the consent of the moms.)

The Catholic lady who pulled Father aside to remonstrate with him knows Cecile Richards, head of PP, personally and finds her "very friendly" (at least to born women). Really, the lady says she's pro-life, but finds Father's approach over the top, one that causes other parishioners (not her) to "roll their eyes" when they read the bulletin.

Father's response was to write an article for The Catholic Thing about the incident and it's a humdinger! Don't miss it.

I first met Fr. Pokorsky when he was the pro-life director of the diocese. Gosh -- had to be 35 years ago. He was getting together one on one with pro-life leaders in the diocese. It made an impression, not only because he paid for the lunch, but because he was so seriously committed to defending the unborn. One would expect that to be the default position of a priest, but, sadly, that often isn't the case. In fact, many are silent on almost any controversial issue to avoid confrontations with the parish pharisees who are nicer than Jesus.

Well, Father gets my two thumbs up vote for using his bully bulletin pulpit to speak the truth about Planned Parenthood in a way that gets attention. Certainly Jesus used some shocking language when he called the pharisees "whited sepulchers filled with dead men's bones." And that description is pretty apt for Planned Parenthood as well. How many bones (and hearts and livers and brains) are stuffed in their refrigerators next to staff lunches?

The Catholic lady may think Father's bulletin notice was over the top, but that's only because she's already born. If the babies could speak for themselves, don't you think they'd agree with Father?
Posted by Mary Ann Kreitzer at 8:01 AM

God bless Fr. Porkorsky. If he had told this woman off I would applaud.

Hi Mary Ann, this is completely off topic, but I want to draw your attention to something that I just stumbled upon. Perhaps you already are aware of it. Apparently there is a group of Catholics in the Arlington Diocese who are going to send a letter to Pope Francis asking for a "less conservative" bishop when Bishop Loverde retires. If you read the comments on the news article (link below) it's clear they are all about women's ordination, LGBT, etc. and they resent our young priests' firm upholding of the Church's teachings against abortion, pornography, etc. I'm going to keep searching to see if there is an effort to petition for a bishop who will uphold the traditional teachings of the Church.

Whoops I'm sorry I forgot to include the link in my previous comment. Here it is:

Thanks for the link. There are only a few hundred signers at present. I need to think about this. I'd love to see who's signed the letter. Not a single person commenting listed his full name and I only noticed one with a first name -- Carol. Somebody mentioned SALT -- a liberal Catholic group. I suspect most of the signers came from them and from Call to Action. They all act like they are the only ones concerned about the poor. What a joke! Our parish in Woodstock operates an Outreach Group that is one of the largest private charities in Shenandoah County. We provide all kinds of financial assistance to the poor (rent, fuel, prescriptions, etc.) not to mention operating a food closet and providing clothing through our thrift store. We aren't busy lobbying for tax money like some of these other groups. We just do it. We are also one of the start up parishes for Family Promise and will be taking in homeless families for a week once every quarter starting in January.

Father Pokorsky is my parish priest and I just prayed a decade of my Rosary for him. He is the absolute best.

I know he will appreciate that. We need to pray for our priests, especially those who are choosing the path of least resistance and NOT warning and teaching their flocks. Much is expected from those to whom much is given.