In Memory of Fr. Constantine Belisarius who entered into Eternal Life on November 27, 2016 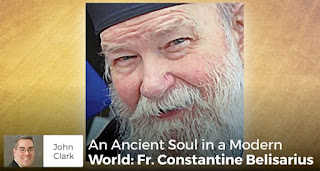 I only met Fr. Belisarius a few times, but I was impressed and humbled when he encouraged me in my little writing apostolate. It was a personal blessing! Forgive me if I describe him as "well-rounded" which, with his long white beard and cheerful smile always made me think of St. Nicholas. How appropriate that this dear man went to the Lord on the first Sunday of Advent. I can imagine him on Christmas day filling our stockings with prayers and blessings as we muddle on in the Valley of Tears. The article after the break was sent as an email by one of my readers. I reprint it here with her permission and with gratitude. As I read it I was reminded of Yeats famous quotation, "The best lack all conviction, while the worst Are full of passionate intensity." How many of the dissenters in our Church bubble over with zeal as they undermine the faith? How many of those in the hierarchy, called to promote the faith "lack all conviction" having traded it for the Almighty tax exemption. How many failed to protect the little lambs in the flock and allowed the sodomite wolves to prey on them without interference? Fr. Belisarius was not one of them. He was a simple, humble priest who truly loved children and God's people. May the Lord bless us with many more like him.

Fr Constantine Belisarius, a very dear friend. died yesterday afternoon.
Please remember his soul in your prayers . Fr Constantine, a Melkite Byzantine priest came to our assistance as parishioners of a Carpatho Ruthenian Catholic Church in NJ. We had written to the bishop complaining that our pastor gave a homily denying the Real Presence. He pointed to the Tabernacle and told us,"God is not in the box so don't pray to him there." Parishioners at the mother parish for our mission  also wrote to the bishop, only they saw the priest in his full persona. They complained he came dressed as a woman to their church functions and that, along with his personal altar server who was a young teen, enjoyed parties in the rectory with other teen aged boys. The parishioners complained that they were not received in their own rectory when they called on the priest.
After  receiving our letter, Bishop [Andrew] Pitaki, came to our church to tell us off from the pulpit. "How dare anyone question the Faith of a priest ? " he railed from the pulpit in a ranting homily of sorts. When we exited the Church we were obliged to kiss the Bishop's ring. After my daughter did so, the bishop looked at my husband and said, "Does SHE take after her mother?" My husband replied, "I certainly hope so !"

On the way home I was in tears and when we arrived I called Fr B and told him what happened. I told him I knew what St Luke meant when he warned that in the End Times they will bring you into the Temple and rebuke you but they will not harm a hair on your head.
That pastor we endured was a bi-ritual priest meaning he could offer both the Latin and Byzantine Rite Liturgies. Like Fr Belisarius, he was a Melkite and Father looked into his background by speaking to his Bishop. Father told me he discovered there "...was an irregularity with his ordination." The priest seemed to have vaporized and a year later I was told he stole all the expensive rectory furniture and cleaned out all the church bank accounts. He never paid the church utility bills and was so behind that the utility companies would only take personal checks from parishioners for the monthly bills. I asked the church accountant why she did not alert the police. Her answer, " Well he is a priest."

The Bishop died in a car crash. Following his demise, several years ago we went to the main (mother church for our mission Church) for Easter Mass. It was cancelled. Our little Mission Church was also sold to Korean Evangelicals. Two parishes that once filled the pews were left with only one or two pew people.
Here is something I want people to know that Fr Belisarius told me. For his part in our defense, Bishop Pitaki took his revenge and the Melkite Bishop was warned against Fr Belisarius as a troublemaker. Bishop Pitaki ( now deceased)  told Father's Bishop at the time ( also now deceased) he "...never wanted to hear Fr Belisarius'  name ever again."

Under Bishop Pitaki we had been assigned a mighty group of perverted priest pastors, including Fr. [John] Danilak ( now deceased) who was found dead on his kitchen floor when the police finally came to arrest him. He died of AIDS after raping and sodomizing two little boys in his Ocean City, MD  trailer. Then there was Fr. [Glenn] Davidovich who had a penchant for filming parish youth wrestling with scantily clad homosexual porn film stars in  the rectory basement. In another parish in PA Fr. Davidovich chastised the elderly long time rectory housekeeper from the pulpit for warning the parents of the parish youth. She never set foot in a church again according to her friend.
Davidovich and his partner were last seen on line as active members in a Priestess-run LGBTQ-inclusive Episcopal parish in Wyoming where Davidovich is pictured entertaining the youth with a puppet show.
One of Danilak's victims committed suicide at ten years old and I was told by a priest he is buried in Monmouth Cty, NJ. Another victim's mother posted she was the mother of a young man who also committed suicide .She said she knew of five other young men  who did the same thanks to the trauma Danilak inflicted on them. These stories are all on line posted as first hand accounts by numerous Byzantine Catholics.

I want Catholics to realize that nothing, absolutely nothing  will be renewed in Truth within the institutional Church UNTIL we have a hierarchy willing to take genuine action to rid the filth from the ranks of clerics. Pray more and more rosaries to that end or the End will be so much more difficult to endure. Father Belisarius was a very courageous priest in that he was willing to speak up to his Bishop on behalf of the Faithful!

We spoke frequently by email and phone. We were able to say our earthly good-byes in August when we visited with him and took him out for dinner We visited his little chapel and delivered to him a box of icons that he wanted to gift to his home schooling  parishioners whom he knew were unable to afford to buy them. Father knew his time left on earth was short  and asked for rosaries for his soul especially from Catholics who loved the Divine Liturgy as he did.

May Our Beloved  Lord and Our Lady embrace him in their Blessed Arms for all ages and ages!
Posted by Mary Ann Kreitzer at 5:48 PM

Truly a devastating loss for us and for so many others.

A few more snippets I want people to know about our beloved Fr B.
Fr invested in the stock market and retrieved his money when his stocks went up. He made a deal with a local restaurant owner so that after his beautiful Divine Liturgy on Sunday he could feed his parishioners an all day buffet at a nominal price since he had subsidized it. He told me many of them were unemployed or underemployed with large families. The people could stay till around five and he told me he loved the fact the children especially could go back to the buffet as much as they wanted and he was pleased they were fed well.
He laughed and told me some people thought he was rich.
He was very rich in his tenderness and love especially for home schooling families.
He knew that most sacrificed a second income so they could teach their children the Faith.
Fr was initially a Jesuit and did his novitiate in Teilhard de Chardin's cell.
He said the Jesuits revered Teielhard so much they often prayed at his grave. I will not repeat what he told me they should really do at that grave site. He left the Jesuits and found the Divine Liturgy of St John Crysostom and knew Eastern Catholicism was where he truly belonged. We often shared stories of the Early Church Fathers and like minded we prayed for the full unification of both the East and the Western Church as it was in Early Christianity.
Fr was kind enough along with another friend in VA to bring our family and another family down to VA, paying for our hotel rooms and food after our husbands were both out of work. He was very sad we left after several nights and wanted us to stay on longer.He gave us a wonderful party the night before we left. We shared a love of reading and would exchange books on the Faith.

No matter his holiness, I would encourage a change in this headline. "Entered into eternal life," seems to imply that the person went to Heaven right away, and that is something we cannot know for sure, so it would be lying. Plus, very few folks go right to Heaven. Even many, or at least some, canonized Saints, likely spent time in Purgatory first.

Thanks for the comment, Dawn, but don't all of us go from temporal life to eternal life when we die? Even those who go to hell have entered eternal life or eternal "death" if you prefer. The souls in Purgatory also enter into eternal life with some time spent in the mud room before they enter the castle.

Thank you for sharing this information. I always seek the truth in our Byzantine faith. My parents fought this Bishop Pitaki. It is sad that there are still ignorant priests that hold him after death in respected esteem. Our Lord is his final judge. He was a true criminal of our church.