These are the faces of White House staffers when Obama met with them after Trump won. It doesn't take a behavioral analyst to read that body language: tears, tightly crossed arms, hand-wringing, frowns and grimaces, compressed lips and furrowed eyebrows. I see some sorrow here, but mostly anger, hostility, contempt, and hate. 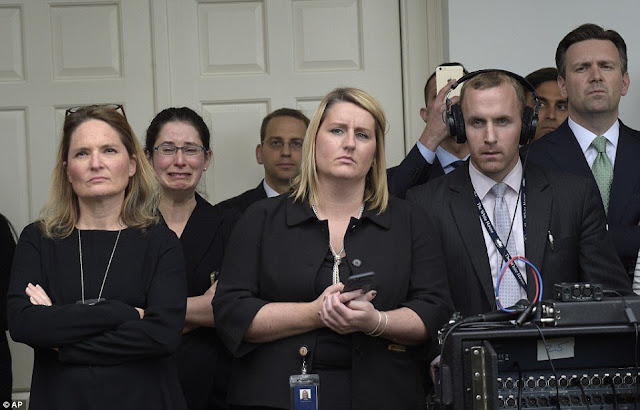 Did you read the body language article? Here's this quote:

Look for signs of anger and/or threat. Signs of threat include v-shaped brows, wide eyes, and an open or down-turned mouth.

Arms tightly crossed over the other is a common sign that the person is angry and is closing himself off to you.

See the original article where the photos appeared here.

Those pictures were taken on Nov 9th when Obama made some after election comments. They were not from today. I think Daily Mail started this and everyone is just repeating it.

Lately (as of yesterday) my answer to unhappy liberals is, "Now you know how I felt for the past 8 years!" Then I add, "Yay Trump!! No more Obama! No more Clintons! No more heterophobic, globalist, anti-God, baby killers!" Then joyfully I end by chiming in with, "I bet Hillary rounded up all her campaign team at dawn, lined them up against a wall, and had them shot!"

Do you have a link to confirm that? I don't think it really matters since this was reacting to the Trump win in any case. But I'd like to be accurate. So if you have a link that would be helpful.

Several people emailed me to say they saw the photos the day before the Trump-Obama meeting, so I've edited the post.

I'm glad someone else emailed you links. It saves me a lot of time. ;-) I saw the pics on Daily Mail the day before, same as your other friends.

Trump entered by the private south entrance to the WH and there was no one to greet him. Another classless Odumbo move. To be fair, it's possible Trump wanted it that way. We shall probably never know and it's really not that important in the bigger scheme of events.

Slightly OT and sort of snarky: I did notice in the one picture of Melania and Mooch, that Mooch was wearing 3 or 4 inch heels. She never wears heals that high. It was clearly an attempt to tower over Melania. I find it rather amusing.

I was thinking of how awkward it would be to be led through the house you are to occupy by the person moving out of it when you know that person most likely hates your guts. The whole idea of that gives me the creeps. Having moved several times I can say truthfully I would never want to be given a guided tour by the previous occupants.

WHY does Melania need to meet and greet Michelle anyway???? Their relationship is a non starter. I hope the Trumps hold up in his new hotel down the street until a proper fumigation, exorcism, and renovation can be done of the entire house.