Birds of a Feather Flock Together...and That Includes Vultures and Other Birds of Prey...

...who are preying on the flock rather than praying for them. And so it goes.

Dissenting Jesuit James Martin is speaking at the D.C. priests' symposium, an alumni event for Theological College in October. If I were an alumnus priest I'd be skipping this event. But hey, who am I to judge?

The Jesuits are, to say the least, an odd flock these days, reference their superior "baptizing" himself as "officially the first Superior Jesuit in Buddhist Baptism.” And that is coming from the Jesuits' own website which includes this disturbing rainbow image re-posted with an article at OnePeterFive. 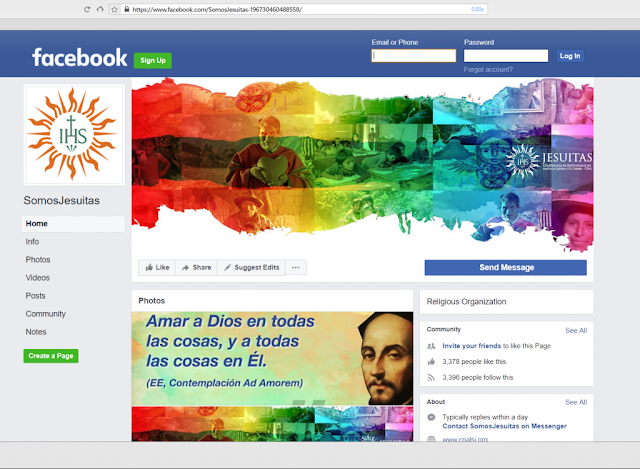 Note that the rainbow on the website is NOT God's rainbow which has seven colors: red, orange, yellow, green, blue, indigo, and violet. The rainbow flag of the gay revolution has gone through a number of permutations, but started out with eight colors including hot pink. But the pink fabric was too expensive so the gays ditched that color. The rainbow morphed down to six for symmetry sake when organizers wanted to split the flag to hang on light poles at the 1979 Gay Freedom Day Parade in San Francisco.

The colors on the Jesuit website belong to the original eight-colored homosexual flag with the return of the hot pink. You can read about the history of the gay rainbow flag here.

The lavendar mafia in the Church is widespread today. Catholics in the pew need to study doctrine,because it is often distorted by those at the highest level who have an obligation to teach the faith, but instead pervert it. Fr. James Martin is one as is his Jesuit superior and many of his Jesuit brethren. They are the new gnostics spreading confusion and heresy whenever they open their mouths.

It is the Arian heresy on steroids.

But please don't let that discourage you. God wins.

Immaculate Heart of Mary, pray for us.

St. Ignatius of Loyola, pray for your unfaithful sons.

Fr. John Hardon, S.J. and Fr. Robert Bradley, S.J. dear friends and mentors, pray for them and us.

It is all SO very wrong! And so very promoted in our corrupt Church by men in high places. But the higher they rise, the greater may be their fall...

Just a clarification. It isn't "the corrupt Church" but the corrupt "men in high places." They cannot destroy the Church even from within. But they can sure confuse and destroy a lot of weak souls.

You are so right, Mary Ann. It is not the Church that is corrupt but the human beings that call themselves representatives of Jesus Christ in the church. Jesus has said that the gates of hell will not prevail against His church and in that, I feel very confident.