The Dark Side of the Moon

When I mention "The Dark Side of the Moon" to most people younger than me they assume immediately I am referring to a rock band, but what I have in mind is far from entertainment of any kind.  It is the title of a book published in London in 1946, with a preface written by T.S. Eliot.  The real author was to have been Polish General Wladyslaw Sikorski, who died unexpectedly in a plane crash off the coast of Gibraltar on July 4, 1943.  The General had collected many personal testimonies of Poles who had been subjected to the most unthinkable horrors at the hands of the Russians who took them captive and used them as slave labor and worse.  It is widely speculated that the crash was in fact not an accident, but rather an assassination.  As long as their beloved leader was alive, the hopes of the Polish army held captive by the Russians was also alive and well and the possibility of having them transfer this loyalty to the Russians against the Germans didn't stand a chance.  Without his inspiration and the dream of regaining their country, they would fight anyone, alongside anyone, simply to survive.

After his death, Sikorski's wife, Helena, with the help of friends gathered the files her husband kept of the Poles who related their tales of suffering and torturous abuse and published them Anonymous.  It is not known whether General Sikorski had intended to write some other part of the book himself or if it was to have been only these diaries of misery and horror, so the world would know and never be able to deny it.  So that we would know who these people were and remember them always in our prayers and pleas for intercession, for it is without doubt many went straight to heaven, martyrs for their Catholic faith.  Today finding a copy of this book is not easy.  A good source to try is Abesbooks online.  When you can find it, you will pay dearly for it.  My own copy is in the hands of my pastor, Fr. Kleinmann, to whom I have loaned it for study and reflection on what evil things men do and how amazing the human spirit is, lifted up by God, to overcome them.
My advice to anyone is pay whatever you have to for a copy of this book.  It is so powerful, it deserves a whole shelf to itself in your library.
I started thinking about this book again this morning when I looked up a transcript of the speech given by President Trump in Poland a couple of days ago. 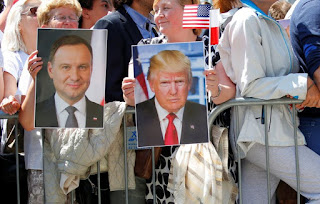 Many will say, "Oh, yes, I saw that on TV."  The fact is you saw only a tidbit here or there and nothing like the whole thing.  You didn't see on TV the crowd on several occasions chanting in unison, "DONALD TRUMP!  DONALD TRUMP!  DONALD TRUMP!"  Nor did you hear the enthusiastic and grateful applause from  the huge crowd gathered to hear him speak.  Nor did you hear the whole of what I think is maybe the most inspiring political speech I've ever heard.  If you listen only to the video, you will not be aware of the Polish people's response, because the CNN link here does not amplify the sound of the crowd and unless you read the transcript you would not know their true feelings.


I know scripts like these are not dashed off like we think of the Gettysburg Address---in haste on a scrap of paper.  Today they are carefully constructed and include the right message, in the right tone, and with a purpose in mind.  They are ghost written by an author or a team of authors who mold their words around the policy of the person who will deliver the speech.  So while I don't assume this came right off the top of Donald Trump's head in a Lincolnesque moment on his way to Warsaw, I do believe it was inspired and no one can read it without being very proud of any Polish heritage they may possess, any Polish people they claim as friends or relatives, or of this president who had the courage to stand before the world and express clearly how much we have to lose if we don't protect western civilization and our right to God in our lives.
I encourage you to click the link to the transcript and read it for yourself in full.   Have a box of tissues ready because your heart will overflow.  It will make you cry.
Posted by Chriss Rainey at 6:00 AM

Labels: Donald Trump, Poland, speech in Poland, The Dark Side of the Moon, Wladyslaw Sikorski

In my mind it all boils down to what was discussed in the book Salt of the Earth (an interview with (then) Cardinal Joseph Ratzinger) - moral relativism is at the root of almost (if not all) the current problems in our society. When Pope Benedict was welcomed to the White House in 2008, Pres. G. W. Bush said as much.

All that said, I do confess to loving the music of the Pink Floyd. 'Dark Side of the Moon' & 'Wish You were Here' are absolute musical genius. In my ever so humble opinion anyway.

About General Wladyslaw Sikorski, it has now been revealed that he unfortunately was assassinated. No he was not touched but his plane was, what is more interesting is that it was done whilst a 'Guard' was sleeping in the rear of the plane.

By a group that was directed by England and disliked Sikorski.

A true political Assassination of the highest kind is now explained, there is a book out now 'To Live Well is to Hide Well' or go to www.tolivewellistohide.wix.com/book