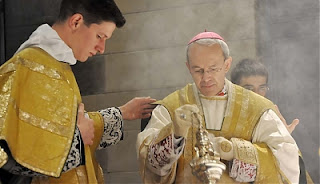 The interpretation of Vatican II and its connection with the current crisis of the Church
The current situation of the unprecedented crisis of the Church is comparable with the general crisis in the 4th century, when the Arianism had contaminated the overwhelming majority of the episcopacy, taking a dominant position in the life of the Church. We must seek to address this current situation on the one hand with realism and, on the other hand, with a supernatural spirit – with a profound love for the Church, our mother, who is suffering the Passion of Christ because of this tremendous and general doctrinal, liturgical and pastoral confusion.

Posted by Susan Matthiesen at 2:23 PM

Lefevre was right and wrong at the same time. The documents of the council are fine, what is not acceptable is to interpret them OUTSIDE Holy Tradition using them as a springboard for the Church of Nice with the excuse of "the Spirit of Vatican II" -- They say "the spirit" because the letter is not sufficient to launch their gay and free for all demolition agenda. In this we have to be VERY CAREFUL not to ditch the Council with the rebels, baby and bathwater. There is nothing wrong with the letter and the TRUE SPIRIT of the Council, as Our Lady said in Garabandal and Akita (not sure which or both?) CV2 will be remembered as one of the great councils of the Church. The Council acted so far as fly paper to make manifest the works of the infiltrated sodomites, masons, and other heretics. Now the second part comes -- remember the MAN OF LAWLESSNESS has to be manifested before Christ destroys him -- the second part is their destruction. Once they festoon their houses of worship with the rainbow colors it will make it much easier for the angels to slaughter them. This is going to be a job for the angelical forces, in that way God will sanctify His Name and the Church can continue, renewed, stronger than ever. There will be no more Liberalism, Islam, Protestantism, homosexualism, and all that stuff. The combat thickens, it is arm to arm now, confusing to see who is who, but the battlefield will be cleared once the Lord shows up. The mistake will be if we reject the council: if we do that and disobey we are doing the devil's work also. All the evil one wants us to do is to rebel. Those who fall for that ruse will go with him. Obedience and purity of heart are the order of the day.