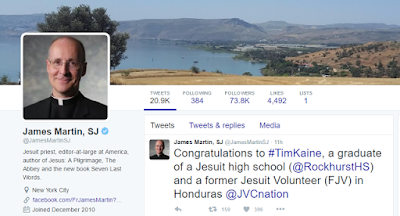 No surprise. Fr. Martin has a track record applauding liberal dissenters, and Senator Tim Kaine who claims to be a "traditional Catholic" is certainly a dissenter, if not a heretic.

After all, liberals (including most Jesuits) think being a Catholic means lobbying for more government money for food stamps and other goodies while making speeches about how much you care about the poor.


Of course, most liberals contribute very little to charity. When Joe Biden was running for VP in 2008 USA Today reported he gave an average of $369 A YEAR to charity. Let's see, a "faithful" Catholic going to Mass on Sunday and putting ($369 divided by 52 weeks a year plus Christmas and Holy Days) $7 in the collection basket. Well, I suppose liberals like Biden figure they "gave at the office" by voting to force taxpayers to fund abortion for the poor while they vote to deny the poor school choice. But after all, if they kill off the children of the poor the little potential criminals won't need to be educated in the horrible government schools. That's what passes for liberal logic and compassion.


...you have got to let people make their own moral choices when it comes to matters of reproduction, intimacy and relationships.

That's not a fair comparison, you say? Why not? The baby in the womb is a little human person who has the right to be protected. Unless, of course, you are a fetus-phobe, size-phobe, or home-phobe who discriminates against others because they are in an early stage of development (fetus means young one, happen to smaller than you are, or make their home in the womb where you once did.)

Tim Kaine and Fr. James Martin, S.J. have something in common. They both claim to be Catholics and they both dissent by action and omission from what the Church teaches, committing grave public scandal. No doubt they both feel vindicated by large followings. Fr. Martin has 20,000+ Twitter followers. Maybe many don't support him, but I'd guess most do. Tim Kaine has fooled a majority of Virginia's voters into electing him to the Senate. No doubt, both "Catholics" feel that all that affirmation from the world proves how much they are to be admired. They seem to have forgotten what the voices of the world called for on Good Friday. I hope everyone reading this post will pray for them both.

A final thought: Seeing Tim Kaine on the Democratic ticket shows that Hillary wants to woo the Catholic vote. She already has the Catholic dissent vote. Can anyone imagine the "nuns on the bus" voting for a real Catholic? They don't even recognize one these days. Can anyone imagine Fr. Martin voting for a real Catholic? But Hillary will probably seeking a great photo op with the pope that Kaine may be able to provide. And if they win? Clinton-Kaine will be a living paradox, illustrating that sometimes a winning is losing  because "What does it profit a man to gain the whole world and lose his soul?" (Hat tip to Vox Cantoris for the screen shot.)
Posted by Mary Ann Kreitzer at 11:30 AM