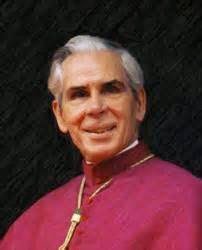 And isn't it appropriate that this champion of life's miracle involved a stillborn infant (born September 2010) who showed no signs of life coming back after 61 minutes during which time the parents were pleading for the baby through the intercession of Cardinal Sheen.

Three and a half years later the little one shows no ill effects from the ordeal. Read the press release here and pray that his cause advances quickly.

Cardinal Sheen spoke often about the world approaching midnight  -- a terrible disaster. I heard him speak of the clock nearing 12:00 near the end of his life, but it was a constant theme. In fact, in 1943, he gave a talk called The Approach of Midnight. It was a prophetic talk. Listen to it, especially his description of the decline of education and see our own culture with its Common Core, its gay-straight alliance clubs, its Planned Parenthood style promiscuous sex education. He saw it all coming and continues to warn us. Cardinal Sheen, please intercede for our poor country, especially the young who are so scandalized by false education that force-feeds pleasant lies. Here's just a portion of Cardinal Sheen's address:

Picture a group of men on a roof-top proclaiming in song and story the glories of architecture, while below saboteurs have already knocked out half the foundations of the house— and you have the picture of modern freedom. Politicians in the upper stories are glorifying freedom while false philosophy in education, and so-called Liberal Christianity, have knocked away its supports.

Firstly, freedom is denied in education today. This may sound bizarre to some educators who have been shouting catch-words about freedom for decades. But I submit they are talking about license—not freedom. They are concerned with freedom from something; not freedom for something; they are interested only in freedom without law rather than freedom within the law. And the proof? Do not many educators today assume that evil and sin are due to ignorance, and that if we educate, we will remove evil? Do not others assume that evil is due to bad environment, bad teeth, or bad glands, and that an increase of material wealth will obliterate evil? Can they not see that these assumptions destroy freedom; for if evil is the result of ignorance, and not the result of a perverse use of freedom, then Hitler is an ignoramus, but he is not a villian? Can they not see that education without a proper philosophy of life can be made the servant of evil, as well as of good? Have they not the vision to see that if evil and sin are to be attributed solely to external circumstances, then man is not free to do wrong? Then wrong is in our environment, but not in us. Is it not inconsistent to praise a free man for choosing what is right, and at the same time, when he does wrong, to deny that he is free?

That kind of education which denies guilt and sin is destroying freedom in our schools, while our soldiers are fighting for it on the battle fronts of the world. Modern religion has also denied freedom. Listen to the talk here.

Hello! When I click on "Read full text here" it returns as "not available." Do you have any idea how I could find this text? I'd be glad to provide my email address is you can send me a copy.

I actually could not find the text. So I changed this to "listen."