Another Scandal from Cardinal Sean O'Malley

When I see things like the press releases below, I think of all the bishops in England who went along as Henry VIII gutted the Church. Only one, John Fisher, stood up and accepted martyrdom. Which side of the bench do you think Cardinal O'Malley would be on? I know, I know, it's a gimme.... He always calls to mind Bishop Bruskewitz's comment during the notorious Dallas bishops' meeting when he described his confreres as that "hapless bench of bishops." Among the definitions for "hapless" is "wretched" and I think that just about calls it. Pray for Cardinal O'Malley. This is one more Henry VIII moment for his episcopacy.

Here are two of the press releases about the event. Isn't it interesting that the folks who are always playing the "That offends me!" card, have no problem attacking and mocking the Church.  And why is the bishop not calling out the outrageousness of the "sisters of perpetual indulgence" whose motto is go and sin some more? Where are you, Cardinal O'Malley?

FRANCISCANS PARTICIPATE IN PRIDE FESTIVAL--- ARCHDIOCESE EVADES RESPONSIBILITY
The Franciscan Friars of Boston's Saint Anthony's Shrine---members of the same religious family as our Capuchin Cardinal Sean O'Malley---manned a so-called information booth at the city's homosexual Pride Festival on City Hall Plaza on Saturday, June 14th. The booth featured banners, buttons and t-shirts emblazoned with the words: "Who am I to judge?" There was nothing evident which suggested traditional Catholic teaching about the mortally sinful, soul endangering character of homosexual relations, which The Catechism of the Catholic Church, promulgated by Pope Saint John Paul II in 1984, described as "grave depravity."

When contacted by concerned Catholics, Franciscans assured callers that they had "the full support of the archdiocese." The Archdiocese of Boston however, issued no public statement on this scandal. The closest thing to an official response was an e-mail sent by the Archdiocesan Cabinet Secretary for Parish Life and Leadership, the Very Rev. Kevin M. Sepe, who told one outraged Catholic:

St. Anthony Shrine, although within the Archdiocese of Boston, is a parish of the Franciscan Order and so I encourage you to contact them directly with your questions and concerns. The Archdiocese has no knowledge of the intent of this initiative and is not associated with it. Thank you for your correspondence.

Catholic Action League Executive Director C. J. Doyle made the following comment: "Religious orders operate churches in the archdiocese with the permission of the archbishop. A telephone call from the cardinal could have put a halt to this scandal in five minutes."

"The 'Welcoming Mass' and 'Rainbow Ministry' at Saint Cecilia's in the Back Bay obviously enjoy the tacit endorsement of the archdiocese, as does the LGBT group at Saint Anthony's. When pro-life scholar and attorney Dan Avila---who spent years serving the church---suggested a link between homosexuality and the demonic, the official newspaper of the Archdiocese of Boston, The Pilot, became a forum for pastors, priests, and deacons of the archdiocese to savage Avila in the letters to the editor column."

"When the Pastor of Saint Paul's Parish in Hingham declined to enroll the child of a lesbian couple in his parochial school, the Director of the Catholic Schools Foundation---whose Chairman is the Cardinal---threatened to withhold funding; the leading member of the Archdiocesan Council of Finance ridiculed the pastor's decision to the secular media; the Archdiocesan Superintendent of Schools hastened to find another school for the couple; and the Archdiocesan Communications Director refused to publicly defend the priest, who was being viciously maligned in the media."

"When the courageous pro-family organization, Mass Resistance, mounted a referendum campaign to restore the 1913 law limiting Bay State acceptance of certain out of state marriages (a statute which gained new relevance with some states recognizing same sex unions as marriages), the Cardinal, after some coaxing in the middle of a pro-life event, signed the referendum petition, albeit with the wrong address. His aides then attempted to retrieve the petition sheet. When Mass Resistance publicized the Cardinal's signature---which was, after all, on a public document---they were told to stop using the Cardinal's name, and forbidden to collect anymore signatures in front of Catholic churches."

"Betrayals of Catholic principles never permitted under Cardinal Law are now becoming routine under Cardinal O'Malley. It should be apparent to any informed Catholic that this archdiocese, under its current leadership, will offer no meaningful opposition to the homosexual agenda, either in civil society, or even in the church itself."

The SPI---whose motto is "Go and sin some more"---have a long history of mocking the Catholic Faith, producing obscene parodies of Catholic art and worship, exploiting Catholic imagery, and profaning Catholic symbols and sacramentals, such as the crucifix. Their blasphemies and sacrileges include the pornographic "Hunky Jesus Contest," held annually on Easter Sunday, and the "Condom Savior Mass," where contraceptives are distributed as a substitute for Holy Communion.

In 1987, they conducted a burlesque "exorcism" of Pope, now Saint, John Paul II. In 2006, one member of SPI, known as "Peaches Christ," who claims to be a descendant of Jesus Christ, waved a sex toy in the shape of a crucifix at a public event at Most Holy Redeemer Parish in San Francisco.

The parade is being held in the city this morning.

The Catholic Action League is describing the role of the SPI as parade marshals as "a callous expression of contempt by parade organizers for the beliefs and sensibilities of Catholics."

Catholic Action League Executive Director C. J. Doyle made the following comment: "Honoring members of an anti-Catholic hate group as parade marshals really tells us all we need to know about how homosexual activists in Boston feel toward Catholics, their Church, and their moral values. For a class of people who are always ready to invoke charges of hatred, prejudice and bigotry against anyone who opposes them, homosexual activists seem curiously unrestrained in ventilating their own prejudices."

"Twenty-five years ago in Massachusetts, homosexuals told legislators all they wanted was to end discrimination in housing and employment. Now, they march through the streets of an historically Catholic city, proudly exhibiting their scorn for the religious faith of millions of their fellow citizens. Respect for diversity, apparently, does not extend to Catholics." 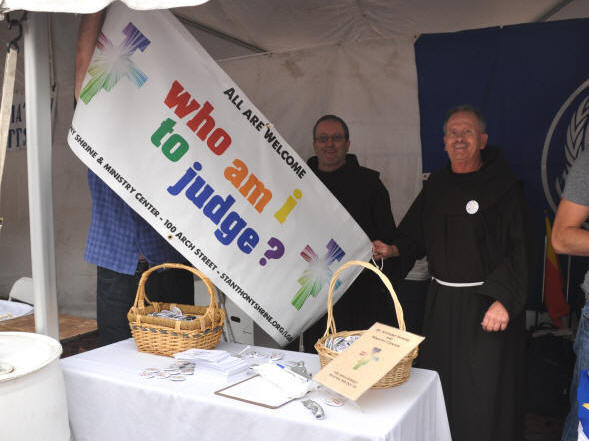 BELOW: Sisters of Perpetual Indulgence (actually men in drag) marching past State House. 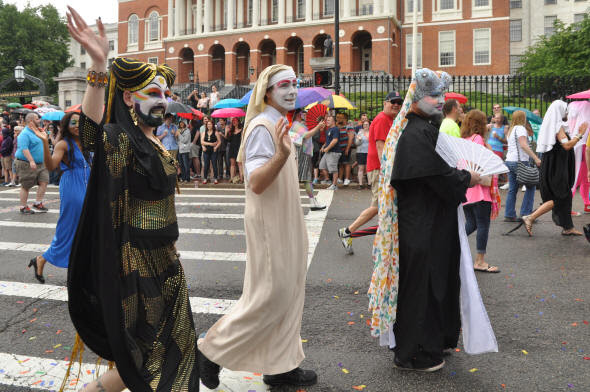 The Devil knows how to get in through the back door. Bishops who can't reprimand their brothers...Are there that many homosexual Franciscans that it would be like killing off your own family to reprimand them?

“They have abandoned the Fort, those
who should have defended it.” (St. John Fisher)

Who held the Fort
Till the Calvary came
Fighting for all
In His Holy Name?

Who fed the sheep
As the pastures burned dry
A few Good Shepherds
Heeding their cry?

Who led the charge
‘Gainst heresy’s Huns
Defending the degreed
To His lowliest ones?

Who battened down
The hatch of the barque
To warm cold souls
From shivering-seas dark?

“Who?” mocks Satan
Delighting in doubt
Fills you with questions,
Never lets you find out.

“Hoc est enum
Corpus meum…
…and for many…” who kept
The dead words – Te Deum!

124Satanists seek religious exemption from gay marriage laws-Just in case pro-homosexualists need to be reminded who they're siding with....