Will Cardinal Dolan Do Anything about St. Francis and their Celebration of NYC "Pride"?

I've been posting about Manhattan's homosexual parish, St. Francis Xavier run by the Jesuits. (See here, here, here, and here.) It's a scandal, but Cardinal Dolan seems to have no problem with it. No discipline for the priests there promoting homosexual acting out. In fact, he cheered them on at the parish rededication.

Nope! Cardinal Dolan saves discipline for orthodox priests like Fr. Justin Wylie of Holy Innocents parish who dared to say in a Sunday homily that the diocese appears to be the abandoning the flock who desire the Traditional Latin Mass (TLM). Holy Innocents is the only parish in the diocese that offers a daily TLM. So what happened to Fr. Wylie in a New York minute? He got the boot at the express order of the Cardinal's office. I mean, it's fine to talk about mixing with the smelly sheep, but, some sheep are smellier than others and those traditionalists just reek of incense!

To make a sad story even more ludicrous, Holy Innocents is planned to merge with St. Francis of Assisi run by the Order of Friars Minor. Seems the Franciscans are as proud of homosexuals acting out as the Jesuits at St. Francis Xavier. (The two Francises must be rolling over in their graves.) At any rate, St. Francis of Assisi is celebrating their "pre-Pride Mass" before the "hot" events on the evening of June 28th and the big parade the next day. Keep in mind that "gay pride" is a loaded term that refers to celebrating the homosexual lifestyle. If you have any doubts about what NYC pride stand for, visit the NYC Pride website. But don't check it out when the kiddies are around. One of the things they're proud of is redefining marriage. (Click on 2008 - 2013 to see the strides they've made in bringing same-sex marriage to reality!) Are you proud of that, Cardinal Dolan? And exactly how can the pro-sodomy parishioners "merge" with the traditional Catholics who keep the faith? Talk about strange bedfellows? 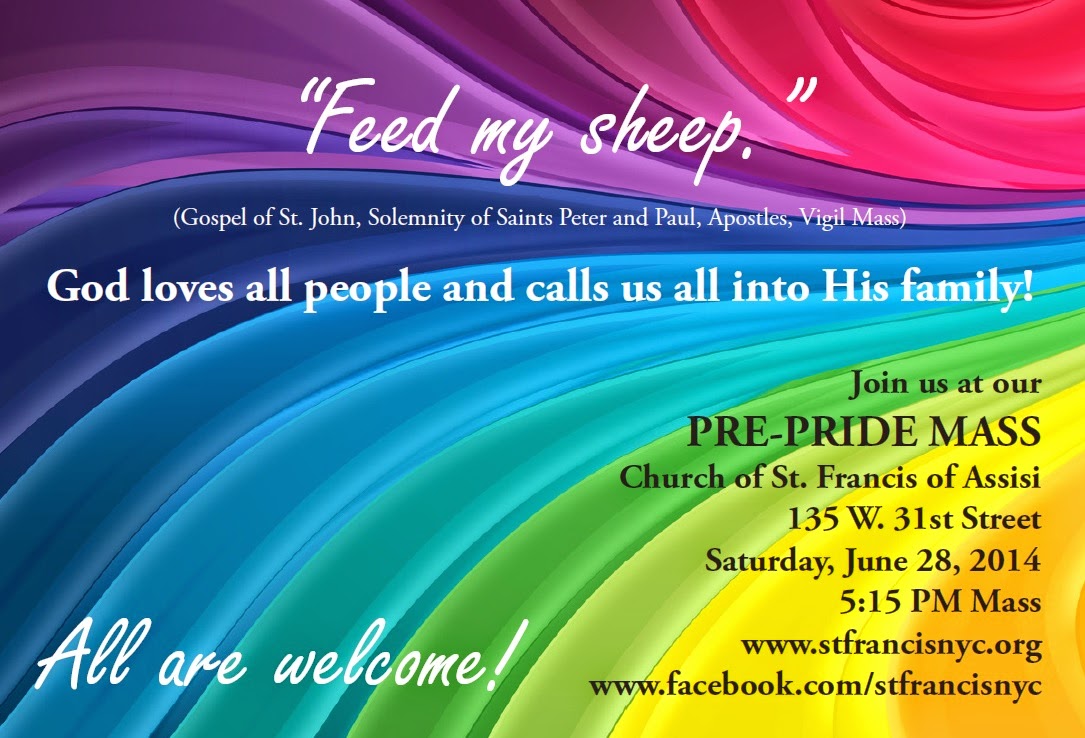