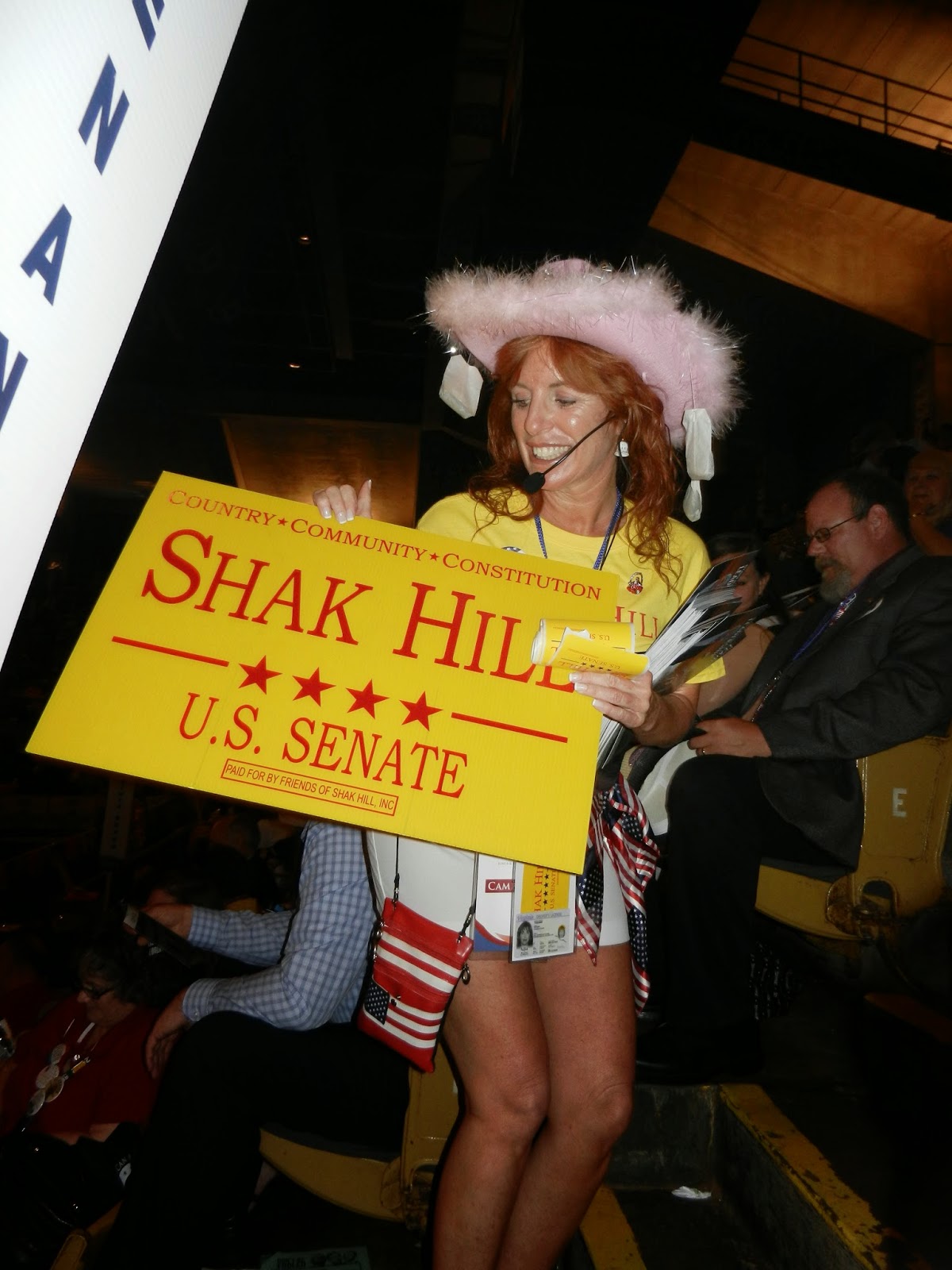 I attended the Virginia Republican State Convention yesterday as a delegate supporting Shak Hill. It was interesting. Ed Gillespie's folks were clearly nervous. They spent the morning and early afternoon lobbying Shak's delegates. When the vote, came Shak was clearly outnumbered but probably received 30-40% of the vote. (Actually, RPV published the results. Shak received almost 39% of the vote. See here -- 1040 to 1616.) Considering he was running against a better known candidate and favorite with establishment backing and plenty of money, his numbers were pretty impressive. The reason we don't know exactly how many votes he received is that, before all the results were announced, Shak motioned for the convention to elect Gillespie by acclamation. His brief statement was a gracious class act and he quoted Gillespie's statement that we should exit the doors of the convention in unity to elect a Republican Senator to replace Obama-clone Mark Warner. Ed Gillespie reached out to everyone in his acceptance speech and mentioned the Tea Party by name. He emphasized that Republicans needs everybody who supports our core principles and we're all part of the team. Unity was his big message. I hope he means it. Party conservatives have been the ugly stepchildren of the party for far too long.


And certainly other establishment Republicans aren't on the unity band wagon. Mitch McConnell, the minority leader in the U.S. Senate would gladly take the conservative Republican base and "crush" us! In fact, that's exactly what he said, chortling after his own primary win in Kentucky. “I think we are going to crush them [Tea Party candidates] everywhere...I don’t think they are going to have a single nominee anywhere in the country."

Well, Shak certainly wasn't "crushed." In fact, he won in several districts and is well positioned to run for office again. After all, how many times did Lincoln lose before he won? According to civilwar.org, "Since losing his first race for the Illinois General Assembly in 1832 he had gone on to lose a race for the U.S. Congress, two races for the U.S. Senate, and one campaign for a vice-presidential nomination." A loss isn't the end of the story and establishment Republicans are losing the base by their big government betrayal. It really isn't clear how things will play out, but there are certainly many disenchanted Republicans who are fighting back!

As for McConnell, he is already proved wrong by the primary win in Nebraska of Tea Party candidate Ben Sasse who "crushed" the two other Republican candidates running. The Tea Party is also close to taking out a nearly six-term establishment incumbent Republican in Mississippi, Thad Cochran (76). The primary was close enough to mandate a June 24th run-off between Cochran and his scrappy, young rival Chris McDaniel (42). It will be interesting to watch that race over the next few weeks. The Tea Party also scored some big wins in Texas. And even when the Tea Party loses, it wins, because it is pushing the party to the right.

The fact is that the establishment Republican Party better wake up and smell the coffee. Real conservatives, whether they belong to the Tea Party or just support its objectives, are fed up with big-spending, elitists like McConnell who are pastel-colored clones of the Democrats. We are also fed up with the establishment deep-sixing candidates like Ken Cuccinelli who received little financial support from the party after winning the nomination for Virginia governor. In fact, some sources claim the establishment wanted him to lose! Matthew Vadum described the betrayal in an article titled, Yes, Virginia, the GOP Establishment did stick a shiv in Ken Cuccinelli. The establishment elitists preferred Democrat boozer and schmoozer Terry McAuliffe over a solid conservative who is described as "extreme" for supporting babies in the womb and traditional marriage, mom and apple pie issues only a few decades ago.

Ken was another class act at the convention yesterday giving a gracious speech calling for Virginians to unite behind whoever won. It was good to see him front and center at the convention and the delegates gave him an enthusiastic welcome and listened attentively to his speech.

It was an interesting convention and one that I was happy to be part of. Go Virginia, beat Warner! And then dethrone Harry Reid!
Posted by Mary Ann Kreitzer at 8:41 PM