What Will It Take to Get This Traitor Impeached? 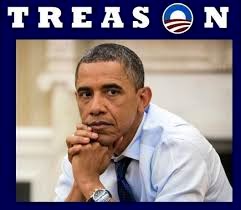 Releasing terrorists to attack us again is horrifying. Are most Americans so deadened by the Democrats' soma-laced goodies they can't see the treachery? Obama has endangered every American and made another 9/11 or Fort Hood or Boston Marathon bombing more likely by releasing these top-level terrorists. When will he answer for enabling the murder of Americans?

Allen West: The Case for Impeachment


Ladies and gentlemen, I submit that Barack Hussein Obama’s unilateral negotiations with terrorists and the ensuing release of their key leadership without consult — mandated by law — with the U.S. Congress represents high crimes and misdemeanors, an impeachable offense.

So I call upon the leadership of the U.S. House of Representatives; Speaker John Boehner, Majority Leader Eric Cantor, Minority Leader Nancy Pelosi to draft articles of impeachment as no one is above the law in America. The failure to do so speaks volumes.

Posted by Mary Ann Kreitzer at 8:32 AM