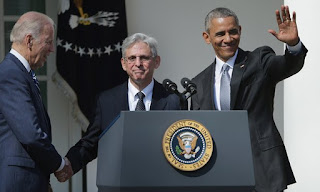 Where does one begin to discuss Obama's Supreme Court nominee, Merrick Garland?

Let's start with the process itself. Obama insists that he has the right to name the next Surpreme Court justice and all the Democrats are screaming across the aisle at the Republicans, "Do your job!", i.e., give the president what he wants!

Actually, the Senate's job is to uphold the Constitution and advise and give consent to court appointments.
Clearly that includes the right to just say no. And in this case, Republicans opposing hearings are following the example of their Democrat brethren. Back in 1992, Joe Biden used strong language warning President Bush not to name a candidate to the Supreme Court during a presidential campaign. His exact words? "Once a political season is underway, and it is, action on a Supreme Court nomination must be put off until after the election campaign is over. That is what is fair to the nominee and essential to the process. Otherwise...we will be in deep trouble as an institution." But see, and listen, for yourselves. Here are Biden's comments in context.

And then there's good old President Obama who, as a senator, wanted to filibuster Bush nominee Samuel Alito.

Oh, but, there's nothing to see here. Just move along.That was then and this is now. Drop the "Biden Rule" down the memory hole and follow the Humpty-Dumpty principle of doing whatever is expedient for liberals at the moment.

Well, enough about the process. Let's move on to the candidate who is being promoted as a "moderate." Ah yes, a moderate. Garland is a staunch opponent of the second amendment and, according to National Review, would likely "vote to reverse one of Justice Scalia’s most important opinions, D.C. vs. Heller, which affirmed that the Second Amendment confers an individual right to keep and bear arms."

Even worse, Garland is backed by Planned Parenthood. Cecile Richards was seen entering the White House the day after Obama named Garland spurring speculation that PP was offering assistance to assist the president in placing another pro-abortion judge on the court. More evidence that Garland is likely to work with the judicial abortion activists? By three to one, his former clerks go on to work for pro-abort judges. He himself from 1978-1979 clerked for William Brennan, the behind-the-scenes inspiration for Roe v. Wade and calls the release of Justice Harry Blackmun's papers a "great gift to the country." Blackmun, of course, is the justice who supposedly wrote the majority opinion.

Another indication that Garland is no moderate comes from the National Federation of Independent Business who said Garland "'nearly always sides with regulators, labor unions and trial lawyers at the expense of small businesses,' which the group called 'discouraging.'" (Source)

What will happen next? Hard to say. In view of the moral morass of the country and the lack of integrity of politicians in general, it's hard to imagine a good outcome. But God is good and prayer and sacrifice can certainly help to overcome even situations that appear hopeless. So contact your senators and ask them to follow the "Biden Rule" and delay hearings until after the election.
Posted by Mary Ann Kreitzer at 11:31 AM

More on Garland's liberalism and his contempt for religious liberty.