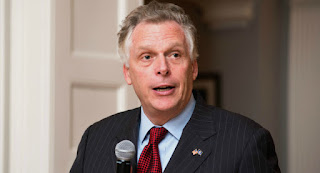 I received the email below from Virginia State Delegate Rob Bell recounting the corrupt way Terry McAuliffe operates. No surprise to anyone who knows his history as DNC Chairman and Democratic appartchik. Just reading about his doings glad handing and using money and influence to bribe people makes me want to take a shower. he's a slimeball who has imitated his leader Barack in running Virginia, not for the people, but for himself and the Dem's political machine. Here's the latest on his attempt to deep six the appointment of Stephen McCullough to the Virginia Supreme Court.

After months of discussions and votes, the General Assembly was finally able to reach enough consensus to elect Stephen McCullough to the Virginia Supreme Court.
McCullough is a Constitutional conservative who worked in the Virginia Attorney General’s office as the Solicitor General and as an Assistant Attorney General. He was initially elected to the Court of Appeals in 2011. He is thoughtful, hard-working, and will be an exceptional addition to the Supreme Court.

Virginia's Constitution gives the General Assembly the authority to choose judges, but that didn’t stop Governor Terry McAuliffe from trying stop McCullough's election. Shortly before the vote, McAuliffe offered to endorse coal tax credits if southwest Virginia senators would vote against McCullough. In a stirring floor speech, Senator Carrico (R-Grayson) stated “I will not bend, I will not bow, will not break to his politically corrupt way to try to thwart the process of this General Assembly.”

Carrico voted with his colleagues and McCullough was elected with the necessary 21 votes. (No Senate Democrats voted for him.) Shortly thereafter, Governor McAuliffe did in fact veto the tax credits.

McAuliffe has again demonstrated how little he cares about principles, and how far he will go to "win." (You can read about similar, previous, threats here.) If you’d like to share your thoughts with Governor McAuliffe about his actions, you can do so by clicking here.

Like his buddies in Washington, McAuliffe has done everything possible to keep child killing as broadly available as possible in abortion facilities that are unregulated and dangerous, unlike other freestanding outpatient surgical facilities.He's also threatened to veto any bills defunding Planned Parenthood. While masquerading as a Catholic,McAuliffe officiated at a lesbian "wedding." McAuliffe's actions indicate a man whose only interest is self-interest. Virginia will be well rid of him when his term ends.
Posted by Mary Ann Kreitzer at 7:00 AM

Can you tell us the position of the Bishops of Virginia on the matter of Coal Tax Credits?

I'll see if I can find out, Tom. Meanwhile, readers may be interested in this article: https://www.washingtonpost.com/local/virginia-politics/senator-mcauliffe-offered-to-trade-coal-tax-credit-to-save-va-supreme-court-pick/2016/03/11/af2dfd8c-e7ce-11e5-b0fd-073d5930a7b7_story.html

McAuliffe calls the tax credits a waste of taxpayers money but he was perfectly happy to waste it to buy his judge. The man is totally unprincipled. Well, that isn't quite right. His operating principle is what's good for #1.

All you need to know about McAuliffe is he's butt buddies with the Clintons!