This Woman is One Sick Puppy! Pray for her! 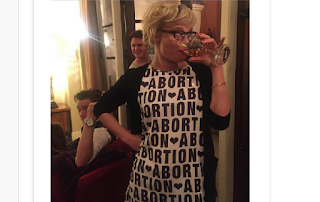 When people choose evil they go to great lengths to defend it. After all, they have to prove that they aren't bothered by the horrible atrocities they commit. In fact, they have to convince themselves that they aren't atrocities at all. Think of how bureaucrats and members of the SS deadened their consciences to the degree they could cavalierly murder millions, even children.
Think of slave holders who could treat families like they treated their livestock. Think of the Rwanda massacre of the Tutsis and the Hutu moderates by the Hutu majority with the government calling on the populace to "kill the cockroaches." Think of Lieutenant William Calley who lined up the villagers of MyLai in an irrigation ditch and told his soldiers to "waste them." A friend of mine was a judge on the military tribunal that tried Calley and described his horror over the event. Calley showed no remorse.

No, there is nothing unusual about evil unfortunately and people can kill their consciences to the degree they can murder and brutalize without apparent remorse. The recent ISIS murders of the Missionaries of Charity and all their other atrocities illustrate the satanic evil that arises from a dead and distorted conscience that can justify anything.

Yes, Martha Plimpton is a sick puppy who needs our prayers. She is in deep trouble if she doesn't repent. Murdering the innocent is a crime that cries to heaven for vengeance and when the victims are among the "least of God's little ones" the killing is particularly reprehensible.

Making a fashion statement out of the killing and bragging about it is so appalling it must make normal people want to vomit. Martha Plimpton clearly belongs to the Lady Macbeth Bloody Hands Society. What often happens to people like that in the long run is, like Lady Macbeth, insanity.

It's hard to repent when you've killed your conscience. On the other hand, it's easy for someone like that to go crazy. Call it diabolical disorientation! Pray for Martha Plimpton.
Posted by Mary Ann Kreitzer at 9:47 PM

You know those "Jesus Fish" car magnets? I saw one today of "Cthulu" which is a fictional old God demon from HP Lovecraft story.

It just goes to show you what people worship now. Not Jesus but a demon. Same with this actress gal. People just.... don't... get.... it.

I keep saying this... Western civilizaiton is in for a terrible chastisement.