Tell Us Something We Don't Know, Pope Emeritus Benedict. 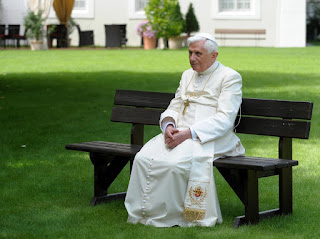 Two big problems according to the former pope:

1) People go to hell, (Somebody tell Bishop Robert Barron!) but modern Catholics have lost the sense of sin and the necessity of baptism for salvation. "Without this attentiveness to salvation, the Faith loses its foundation," Pope Benedict says.

2) Because of the "evolution" of the dogma, "Outside the Church there is no salvation," which has essentially been dumped since Vatican II, the Church has lost its missionary zeal. In Pope Benedict's words, “any motivation for a future missionary commitment was removed.” (Amen to that. I'm okay; you're okay; we're all okay!)

This is not exactly a revelation to those of us who've been paying attention, but to hear it from Benedict in the light of Pope Francis' liberalism is...what's the word?...for want of a better I'll say... interesting.

Here are two paragraphs that should set all of us thinking:


Pope Benedict also refutes both the idea of the “anonymous Christian” as developed by Karl Rahner, as well as the indifferentist idea that all religions are equally valuable and helpful to attain eternal life.

“Even less acceptable is the solution proposed by the pluralistic theories of religion, for which all religions, each in its own way, would be ways of salvation and, in this sense, must be considered equivalent in their effects,” he said. In this context, he also touches upon the exploratory ideas of the now-deceased Jesuit Cardinal, Henri de Lubac, about Christ's putatively “vicarious substitutions” which have to be now again “further reflected upon.”

Despite being glad to see this, I'm tempted to say that it's too little too late. My mom always used to say, "Actions speak louder than words," and, gosh, since Pope John XXIII mounted the papal throne armchair, we've had nothing but "dialogue, dialogue, dialogue" with Protestants, Moslems, Buddhists, Hindus, aboriginal witch doctors, etc. meeting with popes and bishops. We've had Koran kissings, ecumenical prayer services where Catholics join hands with pagans. And recently we even saw Mary Poppins and the Buddha from The King and I mounted in a Catholic Cathedral for the edification of the community. Is it any wonder people are confused?

In 2007, Pope Benedict assured Catholics that the Assisi prayer fest was "not syncretism" (the belief that all religions are essentially the same). Well, maybe not, but what is the perception of the average badly catechized Catholic in the pew? Judging from polls and personal conversations, I'd say most people, Catholics and otherwise, believe the only thing necessary to attain heaven is to "be a good person," whatever that means. Unfortunately for them, that's not what Jesus preached and what Church doctrine teaches. So it's back to the drawing board for evangelizing and catechizing, i.e., performing the spiritual work of mercy, "instructing the ignorant." There are a lot of them out there who don't know how very ignorant they are of the essentials necessary for eternal salvation. Would that our shepherds committed themselves to teaching with authority like their master did. This ignorance of the faith is, as Bishop Athanaisus Schneider says, the fourth great crisis of the Church.

I would love to know the "real story" behind the "retirement/resignation" of Pope Benedict!

I agree. This got me thinking about it again and I almost made some comments on that as well, but I'll leave that to another time. It is certainly strange to have two men in white -- particularly when you consider the Fatima vision of the "bishop in white." The question is, who is the "bishop in white." And if the vision is fulfilled in the lifetime of these two men which one will climb the hill amidst the bodies of the dead?

Pope Benedict uses irrational Cushingism as a theology to interpret Vatican Council II and extra ecclesiam nulla salus : he was unaware of the choice
http://eucharistandmission.blogspot.it/2016/03/pope-benedict-uses-irrational.html

CMTV ON OUTSIDE THE CHURCH THERE IS NO SALVATION
http://eucharistandmission.blogspot.it/2016/03/cmtv-on-outside-church-there-is-no.html

I interpret extra ecclesiam nulla salus like Fr.Michael Muller and Fr. Leonard Feeney since physically I cannot see, know or meet any exception to the dogma.
http://eucharistandmission.blogspot.it/2016/03/i-interpret-extra-ecclesiam-nulla-salus.html


Mistakes in Vatican Council II : All Catholics can interpret extra ecclesiam nulla salus according to the 16th century missionaries.
http://eucharistandmission.blogspot.it/2016/03/mistakes-in-vatican-council-ii-all.html

The hermenuetic method depends upon how you interpret the baptism of desire and being saved in invincible ignorance
The apprehension of Catholics on the eve of the Post-Synod Exhortation - Roberto de Mattei-Roberto de Mattei, Corrispondenza Romana March 23, 2016 (Rorate Caeili)

If the plurality of interpretations is denied...
Lionel:
The hermenuetic method depends upon how you interpret the baptism of desire and being saved in invincible ignorance mentioned in the Letter of the Holy Office 1949 to the Archbishop of Boston relative to Fr.Leonard Feeney. If the baptism of desire etc refers to known cases there is a heremeneutic of rupture.
If the baptism of desire refers to hypothetical, non -objective cases, it does not contradict the dogma extra ecclesiam nulla salus. So there is a hermeneutic of continuity.
Pope Benedict interprets Vatican Councul II with the hermenutic of rupture. Even for Bishop Bernard Fellay, LG 16 is a break with the dogma extra ecclesiam nulla salus.So he rejects Vatican Council II.
-Lionel Andrades
http://rorate-caeli.blogspot.com/2016/03/the-apprehension-of-catholics-on-eve-of.html

Without this new theology, based on an irrational observation it cannot be said the dogma extra ecclesiam nulla salus has been changed or discarded.They have to use the irrationality: Synod Exhortatioin


Michael Matt on the video (See blog Whats up with the Synod) refers to Ludwig Ott who wrote The Fundamentals of Catholic Dogma. I read that book a long time back. I do not remember if he was using the new theology.However Matt then mentions the dogma extra ecclesiam nulla salus.
I assume Michael Matt and Chris Ferrara , are assuming the baptism of desire refers to known cases, it is an example of salvation outside the Church and so it is an exception to the dogma extra ecclesiam nulla salus.This is the new theology.

It is relatively 'new' since it has been in the Church for some 70 plus years and so it was probably part of the religious formation of Michael Matt and Chris Ferrara as children.Perhaps it was the same also for Ludwig Ott.

If Matt and Ferrara are able to see that there cannot be any known salvation outside the Church; we cannot see people in Heaven without the baptism of water, or know of people on earth who are going to be saved without the baptism of water, then they could interpret the dogma extra ecclesiam nulla salus, as it was known to the 16th century missionaries i.e there are no exceptions on earth to the dogma.Anyway in 2016 none of us knows of any exceptions.

It is only by assuming hypothetical cases are objectively known, that there can be a development with the dogma and a NEW theology created.

Without this new theology, based on an irrational observation, an irrational reasoning ( physically seeing people in Heaven) Pope Benedict and Cardinal Kasper cannot say the dogma extra ecclesiam nulla salus has been changed or discarded.They have to use the irrationality.
So it is important for Michael Matt and Chris Ferrara to clarify this point.

We can affirm the traditional interpretation of the dogma extra ecclesiam nulla salus along with the baptism of desire which is implicit, known only to God, accepted in principle and theoretical.So it is not relevant or an exception to the dogma extra ecclesiam nulla salus.
The baptism of desire and blood and being saved in invincible ignorance ( all allegedly without the baptism of water according to the new theology) is a zero case according to the apologist John Martignoni.
So zero cases cannot be the basis of a theology or projected as an exception to extra ecclesiam nulla salus.So the dogma has not changed after Vatican Council II as Pope Benedict suggested in the interview with Avvenire.This surprising interview seems a preparation for the Synod Report to be announced after Easter.

Theologically we have to be prepared when it is asked by Cardinal Kasper that if the dogma extra ecclesiam nulla salus can be discarded or changed then why not other teachings of the Catholic Church ?-Lionel Andrades

Card. Ratzinger interpreted Vatican Council II with an irrationality when a rational option was available .He then excommunicated Abp. Lefebvre and the SSPX bishops for not accepting this heretical version of the faith
http://eucharistandmission.blogspot.it/2016/03/card-ratzinger-interpreted-vatican.html