Sen. David Perdue of Georgia Puts His Finger on It! Americans are "angry, frustrated, and scared" of Washington! 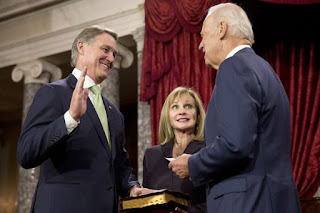 "People across America are angry, frustrated, and scared because they feel like Washington is not listening to them....The rise of career politicians has completely shifted the political paradigm from just liberal versus conservative. There is now a disconnect between the Washington political class and everybody else—the insiders versus the outsiders." Read more...

Exactly! There is one political party -- the establishment. Essentially, they are the country's aristocracy.
Many come to Washington with high ideals that last about fifteen minutes before they betray their constituents and start working for themselves.

But at present, Perdue doesn't seem to be among them. He voted no to hike the national debt in October making a strongly worded statement in the process:

“This bad backroom deal puts unsustainable spending on autopilot and lets Washington politicians simply delay tough decisions for two more years. Congress should be working with a sense of urgency to solve our nation’s debt crisis right now. America can’t afford to wait for a more convenient time for elected leaders to do their job.

“Not only does this deal increase the debt from $18 trillion to $20 trillion, but it also violates the responsible budget principles I have been fighting for every day. In typical Washington fashion, the insiders get to spend today in exchange for empty promises of savings tomorrow. Why would we trust a system that has proven to be untrustworthy?

“Earlier this year, Republicans passed a budget that cut President Obama’s proposed spending by $7 trillion over the next decade and finally balanced, but this deal completely abandons that effort. Our long-term plan was traded for short-term gimmicks, trust fund raids, and even more spending. This deal isn’t compromise; it’s surrender.” (Source)

Looks like we need more David Perdues on Capitol Hill. Here's what his website says about his commitment to traditional values:


"There are principles I share with a majority of Georgians. I believe that we should promote a culture that values life and protects the innocent, especially the unborn. I also believe that we must protect traditional marriage, keeping it clearly defined as between one man and one woman. Being pro-life and believing in the sanctity of marriage are my deeply held personal convictions."

Perdue wants to end funding to Planned Parenthood. He also favors local control of education which would put the kibosh on Common Core. And, the icing on the cake, he signed a pledge to serve no more than two terms as a U.S. Senator. Of course, he's up against an establishment party that is willing to capitulate on all these things if they can stay in power. But, from my perspective, he looks like a man of integrity who may (let's pray) maintain it despite the pressures to join the establishment.

But, let's face it, one man can do little in Washinton. So what's the solution? A new political party? Term limits? Revolution? Conversion?

A good start would be eliminating the Department of Education, the Department of Energy, and the Environmental Protection Agency. Talk about government controlling people's lives! But to ever get those kinds of reforms we need more men of integrity on the Hill. If you want to follow Sen. Perdue and possibly consider keeping him on your "good-guys in Congress list" you might consider signing up for his weekly updates. Personally, I'm going to watching him and see if there really is something good coming out of Georgia.
Posted by Mary Ann Kreitzer at 12:24 PM

NAILED IT. On the head!!! This is EXACTLY where Americans are, Catholic Americans as well. The elites in Washington have underestimated the people's ability to connect the dots. Doesn't seem to matter how the other Candidates seem to slam each other, how the media portrays the debacle, or what is 'uncovered' that is detrimental to the front runner. (in the Republican Party for instance) Heels are dug in......the media seems to be irrelevant. Take for instance the hotly contested Republican Primary. The candidates running against Donald Trump have come out and said that if he were elected to be their Candidate, they would not support him. Sooo as one Washington Post political pundit has stated the common consensus in Washington is....."they are content to throw away the Presidency to possibly save Senators and Congressmen and save the base of the Party" Are you KIDDING ME?? This is not enough to show Americans that we indeed have one Party with two heads? Because Trump may be the front runner, and because he is not an 'insider' they will concede to Hillary???

Then there is the case of Governor John Kasich. Credible evidence is surfacing that he has accepted a large amount of money from.......wait for it..........GEORGE SOROS. The Washington ESTABLISHMENT is not the friend of the American people. PERIOD! Too much evidence to the contrary, it would take a document of evidence the size of the Affordable Care Act to spell it ALL out. But the long and short of it is......they are not for the people on either side of the isle.

I am sorry but it has been my feeling all along that Donald Trump is just a shill to get abortion and so-called same-sex marriage to become entrenched. He really is no different than Hilary or Bill Clinton on the social issues. I do not believe he will do anything about either of them. After all, the man has been married three times. He is a carbon copy of Bill Clinton on marriage, except Clinton never got a divorce. That is probably one reason Donald dislikes Hilary so much -- she reminds him of his other wives. It would be hilarious if the nation was not at stake and a whole lot of souls being destroyed by such disorder.

Yes and the Bush's are morally great too. Read The Franklin CoverUp.
Both Cruz and Rubio took monies from gay activists. At the very least we know Mr Trump likes to bed women!
We also know he has been stating the same thing about the economy and the unfair trade policies of our politicians across the aisles who have sold our nation and it's middle class out.
https://www.youtube.com/watch?v=Lb6u6t5Nfus

To Anonymous at 2:28: Even candidates in the past who have been vehemently pro life and pro marriage have done NOTHING about either one after entering office. Seems as though if it serves them politically to state their 'pro life' positions they will, and once they are in Office they forget all about it. At least Mr. Trump 'says' he is pro life, unlike Hillary that actually PROMOTES abortion and gay marriage. I don't think Donald Trump is as anti gay marriage as I would like, but it does come down to the 'lesser of two evils' in almost every election. We KNOW that Hillary Clinton is a shill for Planned Parenthood, the baby body parts selling company. At least Mr. Trump has said we will not be funding their abortion part of it, I would hope that we can believe him but???