The Chickens Come Home to Roost in Altoona: The Legacy of Bishop Joseph Adamec 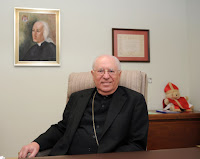 Wanderer Readers will remember Paul Likoudis' series on Bishop Joseph Adamec's "reign of terror" in Altoona. Faithful Catholics in the diocese fought to restore orthodoxy to no avail. A 2007 article summarized The Wanderer's expose in these words:


In 1996, The Wanderer published a six-week series on Bishop Adamec’s “reign of terror” in the diocese, his persecution of priests and his malicious treatment of concerned laity who objected to his lavish personal lifestyle, his tolerance of liturgical abuses, the cultivation of his cult of personality and the dubious selection of seminarians.

In the course of the series of articles, allegations were made that Bishop Adamec had purchased his bishopric, with a multi-million dollar donation to the building of the U.S. bishops’ new headquarters in Washington, D.C. near the campus of the Catholic University of America. Allegedly, Adamec obtained the funds through the Slovak Federation. The allegations published by The Wanderer received no official response, but at that year’s meeting of the conference of bishops, the bishops spent most of their executive session discussing punitive actions against The Wanderer for publishing the expose on Adamec.

Adamec did go after one poor priest with a thirty-six year old accusation of sexual molestation. Was he the scapegoat to provide coverage for all the other homosexual priest molesters left untouched? Was this window dressing to say, "See how diligent I am addressing the problem!"

Once the Boston Globe blew the lid off the sex abuse scandal the U.S. bishops circled the wagons at their 2002 Dallas meeting to try to contain the damage. Bishop Bruskewitz of Lincoln introduced a motion to evaluate the link between dissent and sex abuse and couldn't even get a second to his motion. Meeting with orthodox Catholics in the area during a break in the meeting he described his pathetic brethren as "this hapless bench of bishops."

Faithful Catholics need to defend poor Holy Mother Church beaten black and blue by so many bishops and cardinals hiding their wolfish demeanor under sheepskin. Pray and do penance, faithful Catholics and persevere. Unlike many of our unholy bishops, the Holy Spirit will never abandon the Church,
Posted by Mary Ann Kreitzer at 9:46 AM

So, Bp. Adamec was a priest from the diocese of Saginaw, Mi., under BP. Kenneth E. Untener's reign?

That fairly well tells us all we need to know does it not, Mary Ann?

Indeed...and then there was Hubbard in Albany.

Before he died in 2000, Fr. John Hardon said only a handful of U.S. bishops were completely faithful to the teachings of the Church. I like to think things have improved. I hope that's not a fool's dream.

Unfortunately, it is a dream. Just look at how many have jumped aboard the Francis heresy train.

when I lived there in the 1990's, he actually bragged that no "new accusations" of abuse had occurred on his watch.

But as a doc, I had one of our nurses cry on my shoulder about how her husband was called in by the diocese to beg a family not to report their son's abuse. It was an open secret.

When one of our young priests disappeared with a church worker, the pastor's comment was: Well at least it was with a woman.

This same bishop had his newspaper write editorials in favor of gay St Patrick's day, and bragging about how "gay friendly" the Catholic chaplain at Penn state was. This might be part of the reason that Sandusky got away with his abuse....

but he worked against the charismatic prayer groups and the local "novenas" that were so beloved by our Polish people, and actually told us we were forbidden to visit Medjugorje . I lost count of the letters to the editor I wrote to the church paper about their anti catholic editorials etc.

I hope the guy goes to jail, but as I said: It was an open secret.

I can't yet find the Wanderer articles, but FreeRepublic has a 2002 article about Adamec from the Johnstown Tribune Democrat that has lots of information, (also in the comments).

note the stuff about Penn State... when I heard about no one reporting Sandusky knowing the "gay friendly" stuff going on there made me wonder if there was a connection.

there is probably a lot more stuff at FR since Polycarp and a couple other freepers posted stuff about Adamec back then.

I just heard this week from a friend inSaginaw that things have not improved and good holy priests are still ostracized and the truly knowledgable and faithful are still suffering greatly.

The same is true in Milwaukee. Weakland's people continue to run the diocese top to bottom.

Yes, good, holy priests are ostracized. What we thought was a good priest in the Diocese of Allentown has disappeared. The official answer is that "we can't talk about it". It makes us wonder. It's hard to believe he did anything wrong, although we're all jaded at this point. He preached the Word and brought crowds into the churches.
I pray for priests everyday. We need wisdom and perserverence. Come Holy Spirit!!