Have you seen my son?

The gospel on Sunday was about Jesus missing and his parents in a rush to find him again.  I don’t know if you have ever lost a child temporarily or not, but I have and the overwhelming fear and panic that you experience is like nothing else.  The longer they are beyond your reach, the more terror stricken you become.  It is only holding them in your arms again that can calm your fear.


I have experienced this with my son, who is now 44, on three different occasions and each time the thought crossed my mind that I might never see my child again.  You would think I must be a bad mother or that I had a very disobedient child, but I like to think neither was the case, as I believe Mary and Joseph were also attentive loving parents.  The fact is, with kids strange things just happen.  Our son was first lost in a store while in the care of my mother, who agreed to keep an eye on him while I went alone to the toy department to buy his Christmas gifts and hide them in the trunk of the car without him seeing them.
The two of them were browsing the greeting card racks together and when Mother walked around the end of an aisle in the store she assumed he was by her side.  When he looked up, however, she was not in his sight, so he went directly to a cashier and said, “I can’t find my grandmother.”  He was four at the time and had been told NEVER EVER EVER leave the store without me.  The store made an announcement on the PA system for Chad’s grandmother to please come to check stand #4 to meet her grandson.  Hearing the announcement, I knew there was a problem and I dropped the toys in the aisle and made a bee line to the check stand.   I was there before my mother and there was Chad, happy as you please, waiting to be rescued.  My mother arrived shortly in tears saying, “I’m sorry, I’m so sorry.  One minute he was there, the next minute he was gone.”

The next time Chad went missing was at a furniture store, when he was about 7.  This time my father was driving and our whole family had gone together to look for a chair.  As soon as we were all inside, I looked around for both my children to say, “STAY OFF the furniture, and do NOT misbehave,” but Chad was not there.  After going through the conversation, “I thought he was with you,” and “No, I thought he was with you,” we went outside to see if he had returned to the car for something.  Then, I went into the store again, calling out his name in a loud voice, not caring what a ruckus I was causing.  Not having any luck, and by then in a real panic, I went outside again, searched the whole parking lot, and then I ran completely around the perimeter of the building shouting, “Chad!! Chad!! Chad!!”  Then, back in the store again, to find him standing next to my father, calm as could be.  I said, “Where were you?”  He replied, “I needed to use the rest room and I knew where it was because we’ve been here before.”
The third time he was missing happened when he was about 11 and lasted over three hours.  He rode his bike down the street to play at a friend’s house, but when he found out the kids there wanted to play soccer, he accepted the invitation of Rob, a fellow baseball player in the neighborhood, to go to his house.  Rob’s parents lived only one street away, but the other mothers didn’t know him because their kids were all soccer players.
With dinner time approaching, I called my friend to have her tell Chad to come home.  She said he wasn’t there.  Her kids said they didn’t know where he was.  I called several other mothers to see if he was at their house.  No luck.  At the time we lived in a quiet neighborhood in suburban Fairfield, CT, which is just about one hour from New York City.  Stories of gypsy kidnappings had been in the news and I began to worry he had been stolen.
By this time, all the mothers I knew in the neighborhood were interrogating their kids to see if anyone remembered seeing Chad that afternoon, who he was with, and where he might be.  They said he didn’t want to play soccer and he left with that kid named Rob.  It took some detective work, but we managed to get Rob’s parents on the phone and they assured us he was fine, eating brownies and playing video games in their family room with Rob.  Spencer went in the car to pick him up, though it was literally only two blocks away.  When he walked in the back door with his father, I fell on my knees and cried my eyes out.
I know what happiness Mary felt when she located her son, Jesus, after such a painful separation.  I can imagine how many people she must have asked, “Have you seen him?  Have you seen him?  Do you know where he is?”  And I know how sad at the same time she must have felt not knowing when or if she would ever find him.
Upon locating him, she said,
“Son, why have you done this to us?  Your father and I have been searching for you with great anxiety.”  Jesus said to them, “Why were you searching for me?  Did you not know that I must be in my Father’s house?”  But they did not comprehend what he said to them.  (Luke 2:48-50) 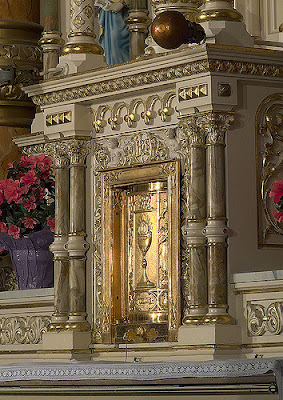 The truth is we only look for what we can’t locate.  We only search for things we aren’t sure where to find.  Things that we’ve misplaced.  Things we are sure should be one place only they are not.  Things we hope to lay our hands on but can’t remember where we put them.
Mary and Joseph did not know it then, nor could they comprehend that Christ was then and would always be found in His father’s house.  He was then, and is now, where we need never have to haphazardly search.  We need only know that the Son of God can easily be found in every Catholic Church on earth.
Posted by Chriss Rainey at 7:00 AM