There is no retraction yet by the Diocese of Covington (as of 7:00 a.m. today) of the knee jerk response to Nathan Phillips' street theater performance condemning the Covington High School boys for disrespecting him. When I looked at it yesterday the statement condemning the boys was still up. This morning the site is down. The high school's site is also down.

Interestingly the story continues to grow. (This extensive article, Lawyer for Covington Catholic Students Threatens Lawsuits unless Media Retract their Stories, is excellent!) One mom whose daughter was at the Lincoln Memorial with another group describes how the drum-beating liberal activist first approached her 15-year-old daughter (wearing a pink Trump 2020 hat) but moved on when her frightened and horrified reaction failed to provide the correct atmosphere for his "victim of the racists" scenario. Adult male terrorizes teenage girl would not make a particularly sympathetic headline now would it? 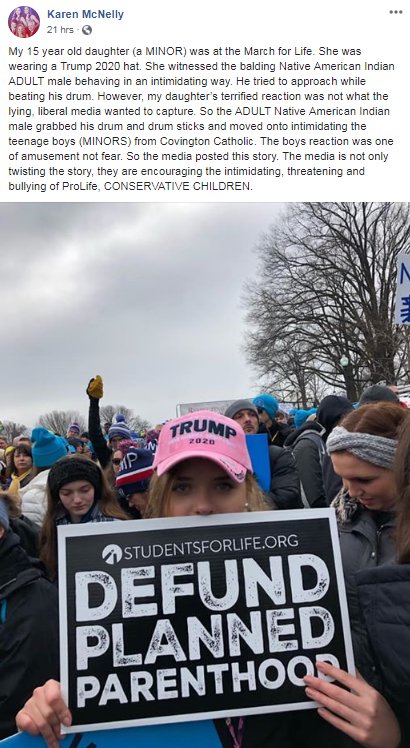 What's happened to the Covington boys, especially Nick Sandmann, is despicable! It's one thing when liberals verbally assault and lie about adults like Clarence Thomas and Brett Kavanaugh. It's wrong, of course, but at least they are picking on people their own size. Going after kids is another thing. Of course, folks willing  eager to rip up babies in the womb, the most innocent among us, would hardly be squeamish about metaphorically threatening and killing other innocent kids if it works to advance their agenda! Alinsky put it this way. "Rub raw the resentments of the people of the community; fan the latent hostilities of many of the people to the point of overt expression...for unless there is controversy people are not concerned enough to act." (Rules for Radicals by Saul Alinsky)

Controversy? Hostilities? We certainly saw that here didn't we? The kids and their families are getting death threats and the school getting bomb threats.

And then there's this. Did Phillips really serve in Vietnam as a Marine "recon ranger"? There's no such title in the corps. Phillips is 64 years old. The U.S. pulled out of Vietnam in 1973. Let's see...that makes Phillips 18 at the END OF THE WAR. So was there enough time for him to be trained in the Marine corps and shipped over before we pulled out? People are starting to ask questions and several veterans groups are seeking Phillips' service records.

Meanwhile the Diocese and the school authorities have apparently gone into hiding!

Am I surprised? Absolutely not!

Many Catholic bishops have thrown good priests under the bus when it was convenient. In my own diocese, Arlington, Fr. James Haley got the shaft for daring to bring evidence to Bishop Paul Loverde of the homosexuality in the diocese. Our previous bishop, John Keating who had a heart condition, died suddenly in Rome the day after he asked during a meeting with a Vatican congregation what he could do about his "homosexual problem." There were rumors at the time that he'd been murdered. In view of Archbishop Vigano going into hiding, ostensibly in fear of his life...well...it casts Bishop Keating's sudden death and the rumors surrounding it in a new light.

Hopefully this story will have a happy ending although school reopens today with cops on the property because of threats of violence. According to reports, many students will stay home out of fear! (Death threats? From peaceful liberals? Really?) Hey, when people are tweeting about locking all the kids in the school and setting it on fire or bombing the place and all the little "Hitler youth"....well... I can understand parents taking it seriously.

On the bright side, these kids are future leaders. An event like this can be life changing. I was once surrounded at a rescue (I was the media spokesman) by a group of pro-aborts screaming inches from my face to the point I began shaking. I stood quietly (like Nick Sandmann) holding up a model of 12 week baby and said nothing. At the end of the encounter, a woman with the screaming group came up to say she didn't agree with what they did to me and apologized. I told her to get used to it because that's what they do and she had associated herself with it. I always wondered what happened to that woman. Maybe her experience woke her up to the ugly reality of liberalism that hates God and hates the good. We saw that same spirit at the Lincoln Memorial on Friday.

Our Lady of Life, pray for us.
Posted by Mary Ann Kreitzer at 7:53 AM

Our Lord and His Mother bless and protect Nick Sandmann and his family for his dignified comportment in the face of that interloper!

May They do likewise for the other boys and girls at Covington Catholic!

I can't help thinking that this assault by evil -- both in DC and subsequently through the media -- will strengthen many of them (hopefully all) to live holy lives in their respective vocations as they come of age.

PS And shame on all those who pounced to a public negative conclusion about Nick and the other kids without first investigating the whole situation, shame ESPECIALLY on the Catholic media people, bishops, and even administration who should have reacted with a great deal more prudence!

As for those who deliberately set this situation up for racial narrative purposes: may Our Lord give them the grace to save their souls, BUT bring them to justice in this earthly life so that all can see that He is God, almighty and perfectly just! +

Thank you for staying on top of this, Mary Ann.

I am just... numb watching this all play out against those Covington Catholic kids (esp Nick Sandmann).

Given the "guilty before the trial memes" (even in so-called Catholic circles) you can almost guess one of the outcomes in all of this:

Many Catholic dioceses and parishes may *stop* sponsoring trips to the annual March for Life each January. That would be a tragedy.

I can't not follow this story. These boys could be my grandsons. A few of our older grandchildren go to St. John Paul II High School in Northern Virginia. They go to the March for Life. It could just as easily be them targeted for this abominable street theater by liberal liars and the lying mainstream media. Nathan Phillips needs to be sued. He continues his lying narrative and the media continues to promote it. He is either completely delusional and mentally ill or he is a deliberate, lying, liberal provocateur. In either case, he needs to be discredited once and for all and stopped before he attempts to destroy any other people with whom he disagrees.

And did you see the fake twitter post put up to make it look like Julie Sandmann posted a tweet saying Indians should have been given more blankets infected with smallpox? This gets uglier by the minute with liars and more liars inciting the mob.
https://www.truthorfiction.com/did-a-covington-catholic-students-mother-tweet-she-wished-natives-received-more-smallpox-blankets/

School was closed today because of this horrible situation!

2:00 p.m. I've been checking the The Diocese of Covington website all day. They now have this posted:

On Monday afternoon the Covington Police alerted us that they had intelligence concerning a planned protest, Jan. 22, at Covington Catholic High School and a vigil at the Diocesan Curia. Due to threats of violence and the possibility of large crowds the Diocese was advised to close Covington Catholic High School, the Diocesan Curia and neighboring Covington Latin School. We thank law enforcement officers for their protection and will reopen when they say it is safe to do so.

Concerning the incident in Washington, D.C., between Covington Catholic students, Elder Nathan Phillips and Black Hebrew Israelites the independent, third-party investigation is planned to begin this week. This is a very serious matter that has already permanently altered the lives of many people. It is important for us to gather the facts that will allow us to determine what corrective actions, if any, are appropriate.

We pray that we may come to the truth and that this unfortunate situation may be resolved peacefully and amicably and ask others to join us in this prayer.

We will have no further statements until the investigation is complete.

Ridiculous.
We are all victims of the politically correct scams.