Toxic Feminism (It Sure Isn't Femininity!) 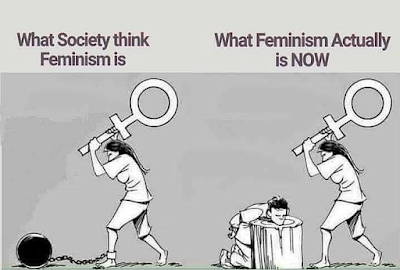 I'm sick of hearing about "toxic masculinity!" Oh, it exists all right. You'll find it all over the liberal
entertainment industry with the Harvey Weinsteins and their casting couches. You'll find it rampant among liberal politicians like rapist Bill Clinton and disgusting Anthony Weiner. You'll find it in the liberal media with men like David Letterman and with music videos showing men wearing bananas and cucumbers as genitals. (I won't show that disgusting excuse for "entertainment.") The howling suddenly becomes very subdued about those outrages.

Gillette's recent ad makes me sick! It labels all men and boys as predators and persecutors. It's a blatant lie! All of the men I know are decent, god-fearing, hard-working family men. The men who come to do work at our home have without exception been respectful and polite. I often discuss their families with them. Not a one has ever been foul-mouthed, rude, or made me feel unsafe. The attack on men is political virtue posturing and shaming and it's been around for years bolstered by lies. Remember the lying attack on the Duke lacrosse team, the calumny against Clarence Thomas, and the recent lies aimed at deep-sixing the nomination of Brett Kavanaugh to the Supreme Court? Ruining men's lives by calumny and slander is a-okay provided they have the wrong political position. And if it's necessary to slander all men in the process, well, they deserve it after all. The feminist mantra is that all men are evil (especially privileged white men) and toxic. Feminism has done this for years.

I know many godly men who love their families and protect and care for their wives and children beginning with my husband. When he retired, his boss, a Marine Corps general, described him as a true gentleman. You never hear a foul word out of his mouth. He treats everyone with respect. He was accused of being a racist by a black employee who made a career out of bringing EEO complaints to Human Resources. It was ridiculous and was easily dismissed. My husband's black secretary sure didn't agree. He helped her get the education she needed to qualify for a professional government series instead of clerical. Whenever I saw her, she told me how much she appreciated Larry's help. I loved to visit with her and her husband at the Marine Corps Ball and get updates on their family.

Larry is not an aberration! He is typical of many men who live and work in our communities. They volunteer as soccer coaches, are announcers at community swim meets. They collect money for charity outside local supermarkets and sell Christmas trees to raise money for their children's schools. They help elderly women load groceries into their cars. They're your dentists and doctors and handymen and postmen and garbage collectors. They're all around you.

I've known some men who are crude and rude. They are in the vast minority. Note that those who are screaming loudest about "toxic men" don't come from flyover country, you know, where all the "deplorables" live. They come from the toxic political environment of Washington, D.C. and the toxic media and entertainment environments of Los Angeles and New York City. Maybe, just maybe they see all men as toxic because they live in a fake and polluted world where they breathe toxic fumes every day.

I'm sick to death of the broad brush that labels all men rapists and abusers, but gives a get-out-of-jail-free-card to those bringing their girlfriends and daughters for abortions to cover up their crimes. Hey, it's Planned Parenthood's belief that "boys will be boys" and pimps and sex traffickers need a recycling station to clean up their "workers." Think we'll see Gillette or any other big advertiser showing that?

Few talk about toxic feminism, but it has done more to damage women than any toxic man could ever do! Want to see toxic? Here it is:

What about the TOXIC MASCULINITY OF MUSLIM MEN who rape girls, stone women to death, make women wear black sacks over their bodies, hate women, walk around stabbing and killing people, beheading girls, crucifying children, sodomizing boys, having sex with female dogs and donkeys, etc. What about that? Any word about that on the horizon? From feminists? From liberals?

I agree, Susan. Truly masculine men should never be lumped with males who truly are beasts.

Hats off to real men who know their strength and know when and how to use it for what it was meant. I hold them in high regard and treasure the one I married.