So what is one Alinsky tactic we can put to good use without joining in his evil and deceptive practices?

Well, Alinsky was a big believer in ridicule. Here's what he said about using it as a tactic:


It should be remembered that you can threaten the enemy and get away with it. [Aren't we seeing this every day as the media continues the attack on the Convington kids?] You can insult and annoy him, but the one thing that is unforgivable and that is certain to get him to react is to laugh at him. This causes an irrational anger.

Ridicule is not inherently evil as long as it's based on the truth and doesn't endanger anyone. In fact, sometimes it's even accidental. I once had a conversation with a man after I gave a talk on abortion. He aggressively challenged me and I responded to all his questions and statements calmly. He came up to me afterwards (I was six months pregnant and I guess I looked young and vulnerable) to say he hoped he wasn't too hard on me and I wasn't upset.

I smiled and said, "No, I have teenagers."

I wasn't trying to be funny, but he recoiled as if I'd slapped him. That experience illustrates what Alinsky said about the reaction to ridicule.

Poking fun at a liberal liar and his enablers who continue to slander the Covington Catholic boys is not immoral. People have a right to their reputations. So when a group is slandered and calumniated, confronting and challenging the sources of the slander is a just response. And if you can do it in a humorous way, all the better!

Since one picture is worth a thousand words, here are my two thousand for Phillips and one thousand for his lying media cronies! Laugh and pass it on! 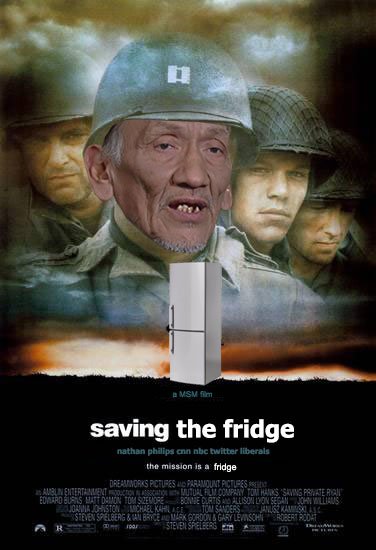 Laughter is natural to those who possess Truth and who follow their King who has conquered death. We laugh at the absurdity of the devil and all of his silly, rebellious, self-referential pomps.

Like the Saint, being burned at the stake in Ancient Rome: "Turn me, to make sure I cook evenly!" Even there we can laugh; the absurdity of life on earth.

Gosh, how can one man star in so many war movies when he went AWOL three times and was demoted to the bottom?