Jose Ureta begins Chapter 3 of his book with this:


“According to oft-reiterated Church social doctrine, there are issues such as abortion, divorce, and the natural structure of marriage, about which Catholics are bound to have a unanimous position.  Conversely, other topics are left to the judgment of the rightly formed consciences of the faithful.  However, by embracing environmentalist ideology, Pope Francis establishes a new paradigm.” 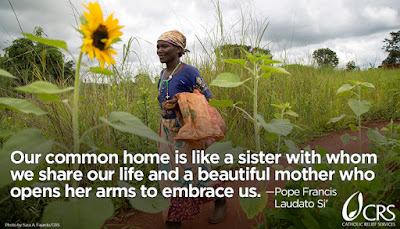 Within a few months of the meeting at the UN to adopt Sustainable Development Goals, Francis published his very controversial encyclical letter, Laudato Si, which I have stubbornly refused to read.  What you need to know about that document can be found in these comments by ex-friar Leonardo Boff, a follower of liberation theology.  In footnote #163 Boff responds to questions from reporter, Joachim Frank this way:


“Did the pope read your books?”


Boff:  “More than that.  He asked me for material for Laudato Si.  I gave him advice and sent him things I wrote….. The pope told me directly:  ‘Boff, do not send me your letters directly.’”


Boff:  “He said to me, ‘Otherwise under-secretaries will intercept them and I will not receive them.  It is better to send things to the Argentine ambassador to the Holy See, with whom I have a good relationship.  The day before the publication of the encyclical the pope sent for me to thank me for the help.”


By embracing this environmental fear mongering Francis has advocated for a lifestyle that would make millions of people totally miserable and kill thousands of others.  His assault on air conditioning is a good example.  Instead of improving people’s lives, the things he advocates for in this letter would in fact guarantee that the people in undeveloped areas stayed that way.


Where he really has my hair on fire is his fascination with indigenous peoples.  AS IF they had some magic formula for life that all of us could find beneficial.  Balderdash!  Quoting Ureta,


“As he sees it, the Indians of the Americas are models of wisdom in their relationship with nature:  ‘For them, land is not a commodity but rather a gift from God and from their ancestors who rest there, a sacred space with which they need to interact if they are to maintain their identity and values.  When they remain on their land, they themselves care for it best.


They are able to instill a greater sense of responsibility, a strong sense of community, a readiness to protect others, a spirit of creativity and a deep love for the land.”


Speaking to the Indians in Mexico, the pope said, “Your peoples, as the bishops of Latin America have recognized, know how to interact harmoniously with nature, which they respect as a ‘source of food, a common home and an altar of human sharing.’”


However, as the author points out, “Contradictorily, this principle of subordination of private property to the common good loses all validity when it comes to indigenous populations.  For them, the right to ancestral lands is absolute, even if this sanctuary-making is detrimental to the common good of the nation and of the indigenous peoples themselves.”


The pope goes on to beg the Indians for their wisdom and their secrets to happiness as men blended, as it were, with nature.  All of this reminds me of the Nazi concept of blood and soil.  Furthermore, Francis imagines global control of ecological problems, insisting that a system of government for all humanity would be best to police the issues and enforce penalties where necessary.  Ureta says that “Laudato Si contains passages that echo the pantheistic and evolutionist mysticism of Fr. Pierre Teilhard de Chardin,” who is mentioned in footnote 83.


Oddly enough, says Ureta, “the pope never mentions the God-created, rational human soul, save covertly in footnote 141, which says, ‘love is always lived out in body and spirit.’”


Getting back to the UN and their goals for a minute, it is worrisome how much in line with their thinking we find the pope.  The UN’s primary cure for what ails the world is to control the population anyway possible.  People are overstressing the poor planet, you see, and we just can’t have that.  The pope declared, “The protection of our common home requires a growing global political consensus.”  That consensus is found in the initiatives such as the World Health Organization’s Innov8 approach that includes abortion, contraception, and sex education of children.


And then, of course, we have to mention the infamous light show on the face of St. Peter’s Basilica in 2015.


Antonio Socci said this about the event,
“At St. Peter’s , on the feast of the Immaculate Conception, instead of celebrating the Mother of God they preferred to celebrate Mother Earth to propagandize the dominant ideology, this neo-pagan and neo-Malthusian ‘climate and ecology religion’ held by the great world powers.”  He called the show “a Gnostic and neo-pagan melodrama that had a very precise anti-Christian ideological message.”
Posted by Chriss Rainey at 7:30 AM