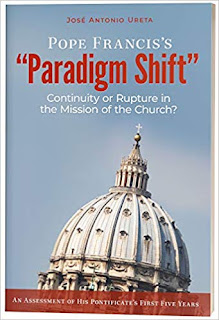 Who would ever imagine the humanitarian crisis on our southern border would have anything to do with the indigenous tribes in Brazil.  I would never have connected those dots until I read the newly published English translation of Pope Francis’s Paradigm Shift, Continuity or Rupture in the Mission of the Church? by Jose Antonio Ureta.  This is “An Assessment of His Pontificate’s First Five Years.”
I’ve read two other books on Pope Francis that have been informative, but neither comes close to the quantity and quality of direct quotes and scholarly detail in concise text and extended footnote explanations.  The book is only 172 pages long and some pages are only half text.  (The other half taken up in footnotes with source information including many useful links to You Tube that you might never otherwise find on your own.)  This small book should be in everyone’s reading range.  It is available now on Amazon in print.  When I first saw it mentioned there was a reference to an online PDF, but I went straight for the hardcopy.  You can access the book online in three languages.  For English, go to: http://www.tfp.org/paradigm-shift-a-critical-assessment-of-the-francis-pontificate/    If you click this link and read even the 8 page introduction you will be STUNNED.  I finished the whole thing in three days.  Very hard to put it down.

All I’ve said up to this point will still fail to convince more than a couple of you to actually read the book and I understand your many reasons for not doing so.  If you will nonetheless bear with me, I will try to give you my take on each of the 10 chapters in daily posts here on Les Femmes.


The Introduction basically explains the title of the book and tells the reader why it is the perfect label for what we’ve experienced with Bergoglio at the helm.
The author starts by giving us the definition of Paradigm.  It is a “generally accepted world view.”  For instance, there was a time man believed the earth was flat and that it was possible to sail off the edge.  This was the paradigm until someone had the guts to test the belief and found out in fact the world is round.  Not only did this change a lot of people’s minds, it meant that the old opinion was no longer acceptable even to those who preferred it to the new understanding of geography.  A paradigm does not happen gradually.  One day people are comfortable with a principle or belief and within a very short period of time, it becomes obvious that a change in all things related to this MUST be altered.  Paradigm shifts have occurred many times in the field of science and even in economics and politics, but for the last 2000 years the Roman Catholic Church has held firm in what it professes, even when the world around it has transformed into something the Apostles would not even recognize.  Technology is a good thing.  Paradigm shifts in things like communication, transportation, banking, and medicine have changed our lives.  The printing press, the steam engine, fiat currency, and anesthesia are all of tremendous benefit.
When the Church, on the other hand, begins to shift from one model to another and in such a brief period of time it is enough to make most Catholics wonder when the ground will stop shaking and after the dust settles will there be anything left salvageable to cling to of the Church we have loved so much.  We all know things are changing.  Not all of us are handling it the same way and I’d guess many couldn’t care less one way or the other.  From day one there have been Francis fans as loyal to him as many today are to Donald Trump.  “I know he has faults, but I LOVE HIM ANYWAY” is what they will tell you.
This is important to note because once any of us places our loyalty on someone, it is not so easy to pull it back.  First of all there’s that having to admit you were wrong thing, and then there’s the “well if I was wrong about him, I’ll have to figure out where to go next.”  Sadly, for many people it will be right out the door and they aren’t likely to come back.  Betrayal is a hard thing for many to overcome.  But it isn’t just the disillusioned Francis fans that are leaving the Church; it is many longtime serious Catholics who have simply been sickened with what’s actually happening in their parishes and dioceses that they cannot escape.
I have lost a friendship over Francis with a person I never imagined I would lose touch with.  We hugged and expressed our affection for each other each time we met for years until Francis was elected.  Within a year we weren’t speaking.  She fell in love with him.  I fed her more and more troubling information about him as I came across it and one day she sent me an email that had one word in it in large print:  BASTA!  Which is Italian for ENOUGH!  I’m sure she meant enough about the pope, but as I’m not one to shut up about much of anything that affects me passionately, I knew it was the end of our happy friendship.  I told myself it was time to shake the dust off my sandals and leave her alone.
I thought for a while this change going on was to make the Church “more attractive” as a “business” which needs to compete with other religions and other local churches in their area.  You know, put a fresh coat of paint on it and roll in a piano and maybe more people will like it.  I’ve placed the blame on what’s happened in the Church on Vatican II.  It seemed like a good punching bag for my frustrations, but after reading Paradigm Shift I see that event as nothing more than a prelude for things to come.  So grab your Rosary and buckle up.  This is only going to get worse.
Before you despair, which we should never do, I should tell you that in Chapter 10 there is hope and a plan for how we need to manage our lives and our loyalty to the Church.    As Catholics we know there is nowhere else to go.
(This article includes an interview with the author about his book.  It was published in July last year before the English translation was in print.)
Posted by Chriss Rainey at 7:30 AM