(This is a continuation of an ongoing review of each chapter in the book by Jose Antonio Ureta, "Pope Francis's Paradigm Shift, Continuity or Rupture in the Church") 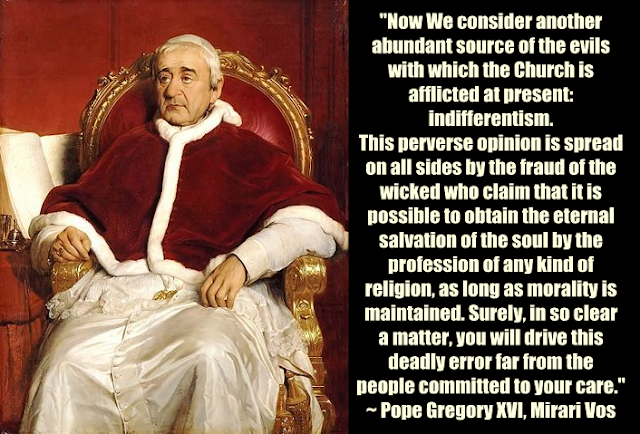 One of my favorite go to sources is Papal Encyclicals Online.  It allows you to search by Pope or by subject discovering the most wonderful things about our past together as generation upon generation of Roman Catholics.  In just a couple of clicks I found the following quote so pertinent to the subject of this chapter of Paradigm Shift.  It comes from the Letter, Mirari Vos, On Liberalism and Religious Indifferentism, by Pope Gregory XVI, 1832, addressed to “All Patriarchs, Primates, Archbishops, and Bishops of the Catholic World.

“Now We consider another abundant source of the evils with which the Church is afflicted at present:  indifferentism.  This perverse opinion is spread on all sides by the fraud of the wicked who claim that it is possible to obtain the eternal salvation of the soul by the profession of any kind of religion, as long as morality is maintained.  Surely, in so clear a matter, you will drive this deadly error far from the people committed to your care.  With the admonition of the apostle that ‘there is one God, one faith, one baptism’ (Eph. 4:5) may those fear who contrive the notion that the safe harbor of salvation is open to persons of any religion whatever.  They should consider the testimony of Christ Himself that ‘those who are not with Christ are against Him (Luke 11:23) and that they disperse unhappily who do not gather with Him.  Therefore ‘without a doubt, they will perish forever, unless they hold the Catholic faith whole and inviolate.”
Continuing in paragraph 14, the pope continues,
“This shameful font of indifferentism gives rise to that absurd and erroneous proposition which claims the liberty of conscience must be maintained for everyone.  It spreads ruin in sacred and civil affairs, though some repeat over and over again with the greatest impudence that some advantage accrues to religion from it.  ………  When all restraints are removed by which men are kept on the narrow path of truth, their nature, which is already inclined to evil, propels them to ruin.  ……….  Thence comes transformation of minds, corruption of youths, contempt of sacred things and holy laws – in other words, a pestilence more deadly to the state than any other.  Experience shows, even from earliest times, that cities renowned for wealth, dominion, and glory perished as a result of this single evil, namely immoderate freedom of opinion, license of free speech, and desire for novelty.”
I think this says very clearly that we welcome the belief in other religions at the price of our own peril.  And yet, this is what our current pope seems to be doing.  As the author, Jose Ureta points out, this pope has invited us all to recognize that “there is no Catholic God” saying instead, “Many think differently, feel differently, seeking God or meeting God in different ways.  ………..in this range of religions, there is only one certainty we have for all:  We are all children of God.”
This current pope, we may hope to assume, has the good intention of world peace and social justice in mind, but the liberty he takes in abandoning what we have always known to be true of the religion founded by Jesus Christ is pure insanity.  You can see the pope in this video which was prepared for the Worldwide Prayer Network in January 2016 and distributed on the internet.
Ureta points out that there are THREE SERIOUS ERRORS in this brief 90 second video.
1.    “The statement that all men are ‘children of God.’  Fr. Ignace de la Potterie wrote:  ‘Divine sonship is always a gratuitous gift of grace and cannot preclude grace bestowed gratuitously in baptism and recognized and embraced in the faith.’ (“Men Are Not Born Sons of God.  They Become So”, 30Days, 12-2009)”


2.    “One can seek God in various ways.  However, one cannot ‘find God in many ways.’  There is only one way to find God and that is in the one, true, and revealed religion, the Holy Roman Catholic Church, founded by Our Lord Jesus Christ.”


3.    “There is not just ‘one certainty for all.’  There are many other religious certainties.  They are obtained both by reason and by the true faith.  They start with the existence of a personal God (which Buddhists deny).  Canon 2 ‘On Revelation,’ of the First Vatican Council’s Dogmatic Constitution Dei Filius, decreed, ‘If anyone says that the one, true God, our creator and lord, cannot be known with certainty from the things that have been made, by the natural light of human reason:  let him be anathema.’”
And what of those who are in fact baptized and separated from the Catholic Church, such as the Lutherans whom Francis appears so anxious to please.  In a press conference, on his plane, he said this:
“I think that Martin Luther’s intentions were not mistaken; he was a reformer….. The Church was not exactly a model to emulate.  There was corruption and worldliness in the Church; there was attachment to money and power.  That was the basis of his protest.  He was intelligent, and he went ahead, justifying his reasons for it…..
He offered a ‘remedy’ for the Church, and then this remedy rigidified in a state of affairs, a discipline, a way of believing, a way of acting, a mode of liturgy.”
If this were reason enough, Holy Father, to bail out of the Church, would we not all do the same today.  Is corruption and worldliness any less obvious that it was then?  To suggest that schism is or ever was a remedy is ludicrous.  Francis doubled down on this when he spoke to the Pentecostal Church of Reconciliation in 2014 when he said,


“The Church is one in diversity.  And to use a beautiful word of an Evangelist whom I love very much, a diversity ‘reconciled’ by the Holy Spirit….
We are in the epoch of globalization, and we think about what globalization is and what unity would be in the Church…..  What shape can we find:  Let us consider a prism:  the prism is unity, but all its parts are different; each has its own peculiarity, its charisma.  This is unity in diversity.  It is on this path that we Christians do what we call by the theological name of ecumenism.”
So it doesn’t really matter, it seems, to Francis that there are many schisms even today from the one Church.  He is, or so it sounds, perfectly onboard with “diversity.”  If you want to believe something other than what the Church teaches, then go for it. 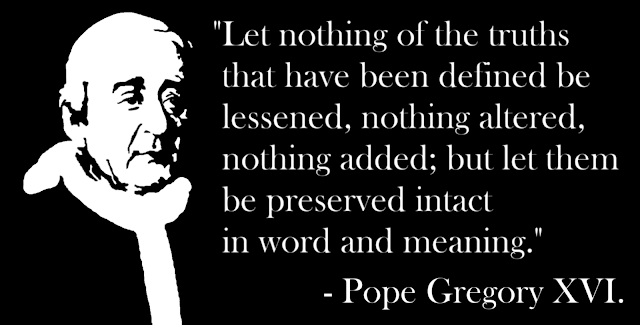 Francis speaks also of an “evolutionary conception of Divine Revelation.”  What he said on the 25th anniversary of the 1992 Catechism of the Catholic Church is so offensive to me I cannot even bring myself to comment after putting it on paper:
“Only a partial vision regards the ‘deposit of faith’ as something static.  The word of God cannot be mothballed like some old blanket in an attempt to keep insects at bay!  No.  The word of God is a dynamic and living reality that develops and grows because it is aimed at a fulfillment that none can halt…..
Doctrine cannot be preserved without allowing it to develop, nor can it be tied to an interpretation that is rigid and immutable without demeaning the working of the Holy Spirit.”
On this same occasion, he stated, “It must be clearly stated that the death penalty is an inhumane measure that regardless of how it is carried out, abases human dignity.  It is per se contrary to the Gospel.”
I suppose you could say this was allowed by him as proof that the Catechism needs to grow and develop and when it does we can just blame it on the Holy Spirit, with absolutely no proof of any divine inspiration or intervention.
We are used to liberals suggesting that the US Constitution is a living document.  They think parts of it are out of date and unsuited to our current lifestyle.  It is completely shocking that a pope would express basically the same opinion of our timeless doctrine.
Ureta quotes Prof. Giovanni Turco, who said, the new pontifical language “gives rise to Bergoglio’s profound thought:  Truth is a relationship.  It is not the relationship’s criterion but its product.  Therefore, truth is relative in the full sense of the word.  Thus, understood, truth has no content of its own.  It cannot be ‘absolute,’ that is, ‘always valid.’  For this very reason, it ceases to be truth (and becomes mere opinion)!”  Ureta believes “this relativistic postulate also undergirds the pope’s praxis and pastoralism.”
It just keeps getting worse.  Next in Chapter Six, the author explores “subjective morality.”
Posted by Chriss Rainey at 7:30 AM

"The word of God cannot be mothballed like some old blanket in an attempt to keep insects at bay!"

The pope is basically calling himself an insect. At first I thought that "insects" was one more name added to the list Francis has already called orthodox Catholics but then reread the sentence. He himself is the insect trying to get at the word of God to chew it to bits...Pope Insect the Chewer and his swarm of locusts eating away at the Word of God.

Thank you Chriss for writing these chapter by chapter posts on Ureta's book.

Re: Theological Evolution in action explained by Dolan this morning.

This morning I watched MR Dolan tap dancing for mercy on the "Fox and Friends" News show.
Apparently he was spewing his aplogetics for not excommunicating Cuomo.
He rec'd lots of letters from Catholics ,"...demanding to know why."
He stated," We used to do that fifty years ago but since Pope JP2 and Francis , we focus on the Gospel message of Mercy."

What about the children who will be tortured and murdered right up to their labor and delivery? Where's the Mercy for their little innocent bodies and souls?
Disgusting is not even the right adjective that applies here.
https://www.churchmilitant.com/news/article/cdl.-dolan-excommunication-should-not-be-used-as-a-weapon

Not one of the cardinals and bishops, much less His Humbleness, ever mention that they have an obligation to announce and to avenge the Rights of Christ the King. If Dolan were to excommunicate all of the false Catholic government officials complicit in this Fourth Reich decriminalization of baby murder up to the moment of birth and if these false Catholics were to ignore him, at least he would cover his own responsibility at his personal judgment. As it is, Dolan and these false Catholic complicit officials have both refused to acknowledge that first and foremost God has Rights and that legitimate government is to be God's Lieutenant, not His blasphemer. They have just punched their own tickets to Hell. Lest we forget, in the Luciferian interstellar matrix, there is a Devil whose name is Jesus and he is the appointed Minister of Compassion. Compassion for Sin, Compassion for offending Almighty God.