Until a few months ago I had never heard of the book, The Myth of the Century.  Judging from the title you might imagine that it is dispelling some ill conceived concept of a particular time.  To the contrary, it is actually proposing a new myth, one that can be embraced by people in the future.  It was written by Alfred Rosenberg, the Nazi closest to Hitler, a long time best friend from the days before Hitler’s rise to power.  They were conspirators together in the coffee shops
and beer halls long before Hitler wrote Mein Kampf.  Once he rose to power, Rosenberg was appointed minister of culture and ideology among other things as it became convenient to do so.

Wikipedia says this about Rosenberg’s long term intentions should the German’s be successful in the war.


“During WWII Rosenberg outlined the future envisioned by the Hitler government for religion in Germany, with a thirty-point program for the future of the German churches.  Among its articles:


·         Crucifixes, Bibles and saints were to be removed from altars


·         Mein Kampf would be placed on altars as ‘to the German nation and therefore to God the most sacred book.’
·         The Christian Cross would be removed from all churches and replaced with the swastika


In the book, The Devil’s Diary, (a true story of the diary of Rosenberg) written by Robert Wittman and David Kinney, we are told,


“Whatever Rosenberg’s rivals in the bureaucracy thought of Myth, the book became a standard text in Germany.  The new Nazi state mandated that it be placed on school curricula and in library collections.  Teachers attending indoctrination courses were asked to bring along their copies.  Law students were required to be familiar with its lessons.  Hitler Youth instructors used its ideas in their ideological classes.  ‘Rosenberg’s path,’ said Baldur von Schirach, leader of the organization, ‘is the path of German youth.


In bookstores throughout the country, Myth rested next to its only rival in the German publishing world, Mein Kampf.  It became everything Rosenberg could have wanted, and more:  He had written a bible for the Nazi movement.


‘I believe,’ one man told Rosenberg, ‘that even after a thousand years have passed, your work will endure.’”


I share this information with the reader for one purpose only.  To share with you my firm belief it is actually possible for men to think they can replace Christianity by influencing a generation, perhaps two, of the youth in their care, mandating a particular dogma be taught in public schools, and in a short period of time, confidently change the world’s viewpoint, whether it is to a new messiah, or no messiah, or simply a faith in common human values that would hopefully unite the world and ensure peace.  Religion as it is, after all, is what causes most wars.  At least, that’s what we are told.  So if you can end any rivalries between faiths and promote the idea that we are all nearly the same in our aims---peace, unity, equality, a fair distribution of wealth, a reasonable formula to control the world’s population, and unite all with a love for something no one can reject, namely the viability of mother earth for future generations, then you will also be able to nudge people that much closer to not just accepting, but actually embracing a global government that will benevolently look after all our needs and keep us happy.


Today, if you believe in manmade climate change, and if you believe that ecumenism is the only way for peace in the future, then you are almost there.  All that’s left is to destroy capitalism, the Catholic Church, and the USA and you have accomplished your goal.  We were well on the road to having that happen and the funniest thing occurred.  Donald Trump won the election. 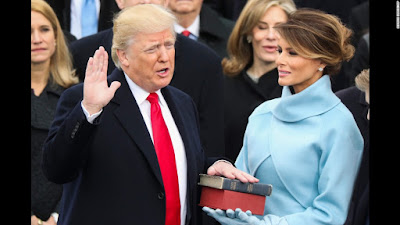 
“Modernity is neither a sociological, political nor properly speaking a historical concept.  It is a characteristic mode of civilization that opposes that of tradition, that is, all other previous or traditional cultures…


Inextricably entangled in both myth and reality, modernity is specified in all fields:  modern state, modern technology, modern music and painting, modern customs and ideas---as a kind of general category and cultural imperative.  ……it is unstable and irreversible except as a value system, a myth


Ureta continues, “From what Tradition did modernity seek to free itself and thus become the dominant ideology and historical path trodden over the last centuries?  Clearly, it was Catholic culture and civilization that prevailed in the Middle Ages.  Pope Pius XII succinctly described the stages of this philosophical and religious emancipation when he spoke of a subtle and mysterious enemy that has sought to effect the intellectual, moral, and social disintegration of Christendom.” 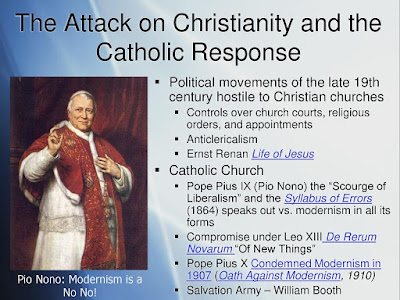 Several popes tried to warn us about the errors of modernity.  Pius IX and Pius X in particular strongly condemned the idea that Christianity and modernity could go hand in hand.  The conflict came to an end at Vatican II when John XXIII officially abandoned the fight and proposed  a “dialogue with the modern world.”


Paul VI said at the end of the Council,


“A wave of affection and admiration flowed from the council over the modern world of humanity.  ……… Instead of depressing diagnoses, encouraging remedies; instead of direful prognostics, messages of trust issued from the council to the present-day world.  The modern world’s values were not only respected but honored, its efforts approved, its aspirations purified and blessed.”


We’ve been on a very slippery slope ever since.  If you have studied communism, you know the belief is that a revolution is inevitable and that a force moves man toward this utopia of unity and oneness.  Francis today believes in this Revolution of thought, Revolution of economics, of politics, of nation states into regions and then into one body, all for the “common good” of man.  Obviously, we will never get there if the Roman Catholic Church doesn’t stop preaching that to be saved man must first be baptized in the name of the Father, the Son, and the Holy Spirit.  That has to go.  According to Francis, it is time to recognize that many people have other ways “of relating to God.”


He wants us to let go of our rigid past and embrace the Revolution, move with his own interpretation of where the Holy Spirit is taking us.


Well, communism sounds nice in theory, but it isn’t what we know is the truth given to us by Jesus Christ, the Son of God.  Francis believes this Revolution is inevitable.  He accepts the idea that it will take time but firmly believes it WILL HAPPEN and it is foolish for us to resist.  We aren’t just talking about redecorating the Sistine Chapel here.  This is throwing out all we know is true of our faith and making of Jesus simply a nice man with some good advice about how to get along, but primarily how to treat poor people.


“Consistent with Guardini’s criterion, Pope Francis predictably sympathizes with each stage of the Revolution in the context of its time.


His goodwill toward its first stage (the Pseudo-Reformation) is evident in the already mentioned statements and gestures regarding Luther.  His position regarding the second stage (the French Revolution) is ambivalent.  He approved State secularization and the human rights it enshrined, but, on the other hand, the pope reckons that the democratic, bourgeois, and liberal political regime it promoted has turned against the lower classes and has been superseded by the ideal of participatory democracy.  He believes further that nationalism is now a hindrance to the ‘dream of a new European humanism’ and to the new, globalized, multiethnic, and multicultural humanity.  Lastly, he believes that the myth of progress promoted by Enlightenment philosophers in the revolutionary salons of 1789 has been overcome by a green worldview.  [My thoughts:  Communists love changing the names of things.]


By contrast, his appeal for the utopias of the third stage of the revolutionary process (Communism), and even for those of the Fourth Eco-tribalist Revolution, seems to be increasingly expressed by his efforts to bring together all popular indigenist movements in the Vatican-sponsored World Meetings and collaboration with international bodies to promote ecological global governance.


In a meeting he had with the founder of La Repubblica Francis said, “I will not have much time to finish the work to which I must dedicate myself, which is the fulfillment of the goals prescribed by Vatican II and particularly that of having the Church meet with modernity.”


Finally, Ureta says,
“Thus, I conclude that this pontificate can be characterized as attempting to carry out a definitive ralliement of the Church with the Revolution and its secularized humanism.  Moreover, that this surrender of the Church to the Revolution is being done while the latter is at an impasse because, in its current stage, its final steps, the Revolution can no longer disguise the full stench and evil of its ultimate goal.”
Posted by Chriss Rainey at 7:30 AM