Northam is Owned Lock, Stock, and Barrel by Planned Parenthood 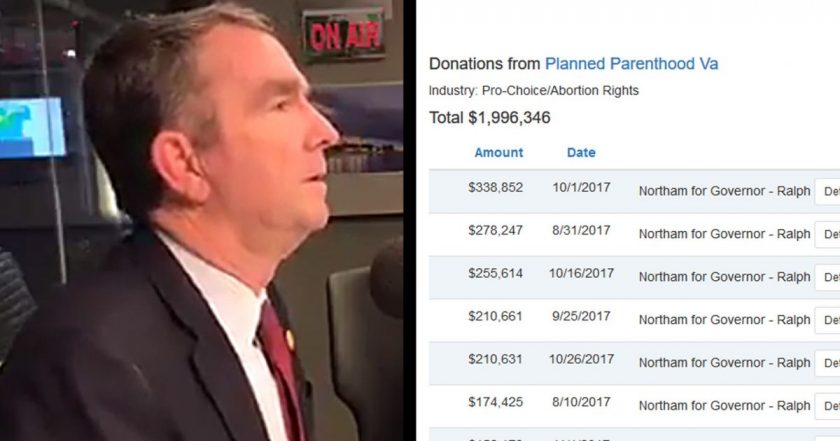 You didn't know, did you, that Ralph Northam, Virginia's governor, got almost $2 million in campaign contributions from Planned Parenthood?


Let's face it. Northam is owned lock, stock, and barrel by Planned Parenthood, like so many Democrats are. And your tax dollars helped to buy him. His support for murdering babies even after birth fits right in with the PP agenda. PP can slice and dice 'em in utero or deliver them intact boosting their profits by selling them to the body snatchers for research. Is it any surprise that Democrats always resist attempts to defund Planned Parenthood no matter how often illegal activities like Medicare fraud, enabling sex trafficking, etc. are exposed? Planned Parenthood is the Democrats' golden goose!

We have lived long enough to see Jonathan Swift's Modest Proposal in reality. The babies may not be served up on the holiday table for consumption; but they are, indeed, served up on the laboratory table as research "specimens." Will the next table be in the surgical theater where organ donations are done? These late-term abortion laws are a win-win for the liberal blood-lust that celebrates "abortion on demand without apology" any time up to and after delivery. Those parents surprised by a baby with a problem can choose murder by neglect after delivery no questions asked.

The left, as usual, is lying about third trimester abortion which is not overly popular even among their base. They say women only have them for serious reasons like a serious fetal abnormality or risk to the life of the mother. That, however, is a lie from the liberal playbook. According to a 2013 study by PP's own research arm, the Guttmacher Institute:


"Most women seeking later abortion fit at least one of five profiles: They were raising children alone, were depressed or using illicit substances, were in conflict with a male partner or experiencing domestic violence, had trouble deciding and then had access problems, or were young and nulliparous," [See the summary of the study's results.

Statistics show that almost NOBODY in the country supports third trimester abortion. Even Democrats want limits. Will this finally wake some Democrats up to the extent of evil supported by their party? Will they join the walkaway movement? There are some hard-core extremists who apparently would kill their own mothers for a buck, but they seem to be in the minority, the powerful minority.  But the Holy Spirit is more powerful still and the truth about this moral evil is so grotesque, so horrifying, so ugly...one can pray that all people who value the truth will rise up against it and cry ENOUGH!

Our Lady of Life, pray for us.
Posted by Mary Ann Kreitzer at 3:04 PM