Paradigm Shift, Chapter Four, "Favorable to Islam and Migration, but Reluctant to Speak Out for Persecuted Middle Eastern Christians"


“…..according to Francis, opening the West to migrants seems to be a non-negotiable principle.”  Added to this is a policy of dialogue with Islam, whatever the cost.  The pope pursues this goal by minimizing Islam’s terrorism matrix while showing extreme caution in denouncing the religious nature of the persecution of Christians in Muslim-majority countries.

The author points out that John XXIII wrote in his encyclical Pacem in Terris, “Every human being has the right to freedom of movement and of residence within the confines of his own State.  When there are just reasons in favor of it, he must be permitted to emigrate to other countries and take up residence there.”


In North Korea no one is allowed to travel to the capital, Pyongyang without government official permission and for people in the countryside, this is almost always denied.  Officials want peasants to believe their life is as good as it gets anywhere in the country.  At the same time, no one who is privileged to live in Pyongyang is allowed to see the devastation and dire poverty in the countryside, because they are told every person in North Korea has the same beautiful lifestyle they enjoy, which by our standards is NOT so wonderful.  The pope in Pacem in Terris said this should not be the case.  A man should be allowed freedom of movement WITHIN HIS OWN STATE to be able to conduct his life, pursue happiness, earn his living, and raise his family.
Pacem in Terris also condemns the idea that a man should be prevented from leaving a state that does not allow him these things that are vital to our existence.  The wall in Berlin was to prevent people from leaving.  The absence of any people on the borders of North Korea and in Cuba is to prevent the people from attempting to escape. This is not desirable for anyone and in the many cases; it only perpetuates the worst of all the modern socialist regimes.  But the document did not contain previous limitations on immigration that were established by Pius XII, predecessor to John XXIII.  Those restrictions were extreme need to migrate and the second was the host nation’s right to restrict access for the sake of the common good.
This has brought on, fifty years later, an attitude that men can move about freely from one country to another as it suits them and that they have a moral right to do so without regard for how it will upset the host country.  According to Ureta, this violates the “Aristotelian principle embodied in Catholic social doctrine, according to which the common good of society prevails over the private good of individuals.  Moreover, the pope’s statement is contradictory in itself because as the Catechism of the Catholic Church says, the common good presupposes that ‘authority should ensure by morally acceptable means the security of society and its members,’ so that the common good ‘is the basis of the right to legitimate personal and collective defense.’”
We see the threat to the “common good” of people in places like Sweden which has practically been overrun by immigrants that do not share their culture, their beliefs, nor their sense of what is or should be legal.  The same continues to occur in other countries such as Denmark and the Netherlands.
Italian journalist, Eugenio Scalfari in 2017 said this,
“I do not understand this pope.  What he says is beyond any rational understanding…. Why does he insist on total acceptance?  The pope does this because he detests the West.  He aspires to destroy it.  He does everything to achieve that end.”
On the other side, as Ureta points out, “seems to be a distaste for Europe’s Christian identity.  The pope is quoted by La Croix in an interview saying about Europe, “We need to speak of roots in the plural.  There are many.  In this sense, when I hear about the Christian roots of Europe, I am sometimes afraid of the tone, which can be triumphalist or avenging.  That becomes colonialism.”
In an interview with book author Dominique Wolton, the pope said,
“It has important Christian roots that is true.  But that is not enough to define it.
There are all our capabilities.  These abilities to integrate, to receive others.  There is also language, within the culture.  In our Spanish language, 40% of the words are Arabic [sic].  Why?  Because they were there for seven centuries.  And they left their mark.”
What he’s suggesting is that Europe is not as European/Christian as we would like to believe.  It has Arabic roots and they are as valid today as they ever were.  All this relates to his ideas on the “indigenous” people.  THEY not the usurpers of the last two thousand years are the actual owners of the land.  The rest of us are just what?  Long time squatters with no real rights to call our countries our own?
As Ureta puts it,
“This means passively accepting the irresponsible mass immigration policies promoted by the important European leaders.  It entails allowing mostly Islamic immigrant ghettos to form inside European nations.  In these enclaves, Muslims refuse to assimilate into the culture of their host countries.  They are filled with men who dream of extending the Islamic umma to all of Europe.  Marwan Muhammad, the spokesman of the Collective against Islamophobia, asked in the Grand Mosque of the Orly ‘No one in this country has the right to define for us what constitutes the French identity.’” 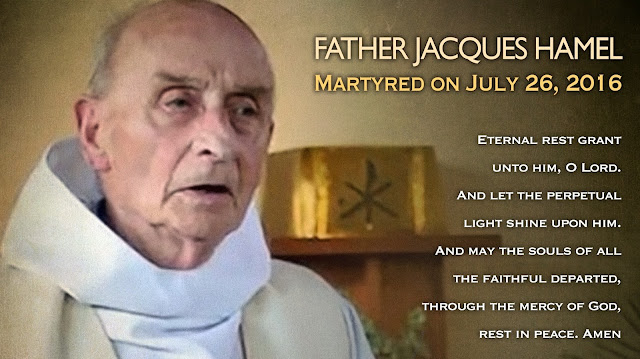 In July 2016 when asked about the murder of Fr. Jacques Hamel as he was celebrating mass in France, the pope said,
“I don’t like to speak of Islamic violence because every day when I open the newspapers I see acts of violence, here in Italy:  Someone kills his girlfriend, someone else his mother-in-law…. And these violent people are baptized Catholics!  They are violent Catholics…. If I spoke about Islamic violence, I would also have to speak about Catholic violence.  Not all Muslims are violent; not all Catholics are violent.  It’s like a fruitcake, there’s a little bit of everything, there are violent people in these religions.  One thing is true:  I believe that in almost all religions there is always a small fundamentalist group.  Fundamentalist.  We have some ourselves.  And when fundamentalism gets to the point of killing---and one can kill with the tongue (these are words of the Apostle James, not mine) as well as with a knife… I believe that it is not right to identify Islam with violence.  It is not right and it is not true.  I had a long talk with the Grand Imam at the University of al-Azhar, and I know what they are thinking; they are looking for peace, for encounter.”
So there you have it.  He, Francis, spoke to their leader and has full confidence in the peaceful aims of all of Islam toward infidels. If you think that’s bad, “there is worse,” says, Ureta.  “For Pope Francis, Islam is not only peaceful but a means of salvation for Muslims.”  (You read that correctly.)  On January 19, 2014 Francis said to immigrants at Sacro Cuore di Gesu a Castro Pretorio, “It is important that you share….the Bible with those who are Christians, the Koran with those who are Muslim.  Share with them the faith they have received from their parents.  Go forward always.  Share your own faith too.  God is only one.  He is the same.  Some [worship Him] in one way, some in another.”
This had many former Muslim converts wondering why they ever bothered to become Catholics.
Ureta points out that well-known Catholic Islamicists have “warned against the illusory nature of this ‘policy of the extended hand” saying, “We also must have the courage to say that Islam has elements of  violence in the Koran and in the life of Muhammad.  If we continue to say that ‘Islam is a religion of peace,’ we only create confusion and mystification.”
In stark contrast to the opinions of the pope we find a saner wiser voice in of Fr. Boulad as he spoke after the attack in 2017 of Coptic Christians on Palm Sunday,
I accuse Islam of being the cause of this barbarity and of all acts of violence committed in the name of the Muslim faith.  I accuse not only the terrorists or terrorism.  I accuse not only the Muslim Brotherhood or the nebula of small groups that gravitate around this violent and totalitarian jihadist confraternity.  I accuse not only Islamism or radical and political Islam.
I merely accuse Islam, which is political and radical by its very nature.  As I wrote more than twenty-five years ago, Islamism is Islam without disguise, in all its logic and rigor….
I accuse the Catholic Church of maintaining with Islam a ‘dialogue’ based on complacency, compromise, and duplicity.  ………such monologue is today in neutral gear.”
Why would Francis or any pope take such a stance one might ask?  He would, in my opinion, if his aim was focused primarily on a future world in which religion is nothing more than a quaint personal habit and all men whether religious or not have as their goal peaceful obedience to a single world government.  No longer must mankind worry about the Kingdom God so much.  The paradigm shift is to a world where all of us are simply the same and must agree to go along to get along on “mother earth.”
Posted by Chriss Rainey at 7:30 AM